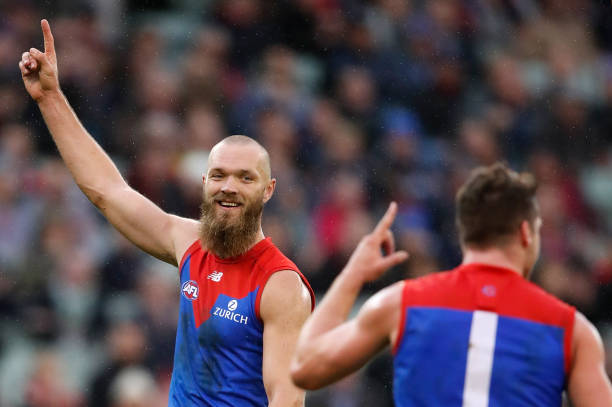 AFL Round 10 is in the books and here is your review of all the action.

Melbourne with a Definitive Win in Alice Springs

Adelaide fans had plenty of hope despite a long injury list heading into their game against Melbourne. The Demons built an early lead and cruised away for the 146-55 thumping win though as they extended their winning streak. The Dees dominated every aspect of the game, led by Angus Brayshaw, Jack Viney, and Clayton Oliver (30+ disposals), and 11 goals combined from Jesse Hogan, Alex Neal-Bullen, and Christian Petracca. Brayshaw and Jake Melksham combined for 6.

Matt Crouch and Rory Laird were respectable for the Crows, while Richard Douglas and Eddie Betts combined for 4 goals, but the injuries clearly set back the Crows and put them out of contention this game.

Getting a win in Melbourne is never easy for West Coast, but they extended their ladder leading record with a 75-60 win against Hawthorn in what was a pretty even contest. Liam Shiels and Tom Mitchell had decent games for the Hawks, and Jaeger O’Meara kicked 3 goals but 35 disposals from Andrew Gaff outshined everyone else on the ground while Josh Kennedy and Willie Rioli combined for 5 goals that made all the difference.

West Coast will surely trip up at some point this season, but they are clearly the league’s best team right now.

Collingwood was down at the half but they surged in the final term to a 90-55 win as the Western Bulldogs attack continued to struggle. The Dogs kicked just 3 goals the final three terms and none in the second half despite 30+ disposals from Toby McLean and Jack Macrae. The Pies got stand up showings from their core of Adam Treloar, Scott Pendlebury, and Steele Sidebottom, Treloar, Will Hoskin-Elliot, and Josh Thomas were their multi-goal scorers while Jack Crisp was solid in the backline and Brodie Grundy posted a solid ruck showing. The win sends Collingwood into the top 8.

North Melbourne moved to #5 on the ladder with a surprise road win against Fremantle 86-58. A strong final term saw the team with more scoring chances improving their goal kicking throughout the game and finally securing the win. Nat Fyfe and Luke Ryan were best on ground for hte home team but only Michael Walters had multiple goals. Ben Jacobs and Jarrad Waite led North, while Ben Brown added to his Coleman Medal count with 2 more goals.

AFL laggards St. Kilda, Brisbane, and Carlton gave it a solid effort but the top 8 favorites Richmond, Sydney, and Geelong all claimed wins. Richmond defeated the Saints despite trailing in the third term and losing the disposal count in a big way. Without Jack Riewoldt the Tigers were a bit hampered on the forward line but Josh Caddy, Dan Butler, and Nick Vlastuin (who came forward) stepped up, with Caddy kicking 6 and the latter two players adding another 6, along with Trent Cotchin and Dustin Martin leading the disposal count.

The Saints got big games from Seb Ross, Jack Steven, Jimmy Webster, and Jarryn Geary (among others), plus 6 goals from Jade Gresham, but they still suffered a painful loss against the reigning premiers.

The Brisbane Lions kicked 6.13 in their 67-49 defeat against Sydney in a messy game. The Darcy Gardiner and Harris Andrews led backline was key for the Lions, while Dayne Beams and Mitch Robinson had 30+ disposals, and new captain Dayne Zorko was solid, but the Lions lacked a multi-goal scorer. Josh Kennedy led the Swans while Isaac Heeney, Ben Ronke, and Will Hayward had 2 goals each.

Carlton kicked 5.15 in a 73-45 loss to Geelong. The Cats did enough to win despite losing ruckman Esava Ratugolea to a long term injury. Tom Hawkins kicked 3 goals, while Patrick Dangerfield had 29 disposals. Kade Simpson, Patrick Cripps, and Ed Curnow again turned in good games for Carlton, but the Blues just don’t have enough talent on their list to win games like this.

Both Essendon and GWS have struggled this year but the Bombers won 95-60 in their h2h matchup. GWS has lost 4 straight despite valiant efforts from Stephen Coniglio, Heath Shaw and Callan Ward. The Bombers got 6 goals from Jake Stringer and Mark Baguley as a pairing, while David Zaharakis and Dyson Heppell were key in the midfield.