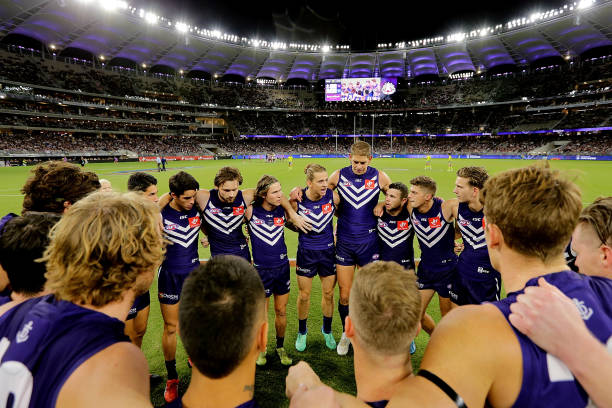 With just a day’s break between rounds 5 and 6, footy is back, and back on a standard three day weekend schedule as we look at what’s ahead for round 6.

The Dogs are just 1-4 but they are taking on an 0-5 Carlton side they have beaten for three straight years. The Dogs add Hayden Crozier, Bailey Williams, and Lachie Hunter, while losing Lukas Webb, Mitch Honeychurch, and Tory Dickson this week. Carlton returns key backline player Caleb Marchbank, and Matthew Kennedy, while Jarrod Garlett and Jed Lamb are out. Carlton stood up last week against West Coast, while the Dogs were thumped, but unless Harry McKay and Levi Casboult ball out the edge on attack, and the win should go to the Dogs. Western Bulldogs by 11

Both sides are 3-2 but the Cats are at home and the Swans have two key outs this week with Lance Franklin and Dan Hannebery missing in action. Dean Towers is also out while Robbie Fox, Daniel Robinson, and Ben Ronke come in. The Cats get forward Tom Hawkins and Cory Gregson back, but lose key forward Daniel Menzel and Jackson Thurlow. Both teams should feature in finals, but Geelong has found ways to win at less than full strength, and I’m not sold on Sydney being able to fill a buddy sized hole in their attack. Geelong by 22

After a strong start it’s been two disappointing rounds for Port Adelaide. Next they get the in-form Roos in Melbourne, a side they have won their last three against. The Roos swap an injured Shaun Higgins for rookie Luke Davies-Uniacke, while Dom Barry and Aidyn Johnson are in for Lindsey Thomas and Hamish Hartlett.

The Power backline will need to keep Ben Brown and Jarrad Waite in check, as Brown, a Coleman contender, has terrorized teams in North’s victories. The Port recruits need to rise this week, and I have a feeling they will. Port is the better side, but this one should be close. Port Adelaide by 13

The winless Lions face a 3-1-1 GWS side that they have lost four straight times against. GWS was a bit shaky last week, and they are missing Toby Greene (Zac Langdon and Nick Shipley in for Dawson Simpson and Toby Greene), but they are simply better than the Lions who swap Luke Hodge and Ryan Bastinac or Oscar McInerney and Daniel Rich. Nobody can accuse Brisbane of a lack of effort but their struggling midfield should get run by Stephen Coniglio, Brett Deledio, and Callan Ward of GWS. GWS Giants by 41

Hawthorn started strong but has lost 2 of their last 3, while the Saints are sitting at 1-3-1 and perhaps already facing a must win game. Jimmy Webster for Hunter Clark is the only change for the Saints this week, while the Hawks lose James Sicily and Liam Shiels, adding Shaun Burgoyne and Will Langford back in, plus rookie James Worpel.

Hawthorn was exposed by a lack of forward pressure last round, and Tom Mitchell was tagged out of relevance. Seb Ross, Ben Long, and the rest of the Saints attack will need to outpace the Hawks here, but I expect Mitchell and co. to respond and get Hawthorn back on track. Hawthorn by 34

The Suns struggle against the Crows, and though both teams are 3-2, the Crows are at home and likely to go up, while Gold Coast would very well go down from here. The Crows return Matt Crouch and David Mackay for Jake Kelly and Kyle Hartigan. Tex Walker and Josh Jenkins have been key in their wins, but the return of Crouch is perhaps most important to their chances. The Suns swap Michael Rischitelli and Darcy Macpherson for Michael Barlow and Max Spencer. Barlow will give them a boost and it’s a shock he hasn’t played thus far, but unless they play their best the Suns probably get run. Adelaide by 36

This is a critical early game for both teams. They started the year with finals hopes but at 2-3 the risk of going in the wrong direction is very real after some disappointing performances early in the season. The return of Jordan Lewis and Tom McDonald will help Melbourne, while Josh Green and Tom Bellchambers are among outs for the Bombers. Joe Daniher has had a disappointing year for Essendon and when I look at each of the line matchups I give the Demons an edge. Jesse Hogan, Clayton Oliver, and Michael Hibberd will compete against the showings for Daniher, Zach Merrett, and Michael Hurley. Max Gawn should dominate in the ruck though and that will be a key difference maker. Melbourne by 24

Collingwood vs. Richmond (Sunday at the MCG)

Richmond is top of the comp at 4-1, while the Pies have been good in their own right, going from 0-2 to 3-2 in as many weeks. It’s a short week for both sides as Chris Mayne is a surprise in for Collingwood, with Mayne and Jarryd Blair in for Ben Crocker and Travis Varcoe. The Tigers swap Jack Graham, Josh Caddy, and Nick Vlastuin for Brandon Ellis, Sam Lloyd, and Jacob Townsend. Collingwood has played at it’s best this season when their midfield, led by Adam Treloar and Steele Sidebottom, and their ruck Brodie Grundy is firing. Grundy helping control the pace against the Tigers will be key. Richmond has found multiple ways to win this season though and Dusty Martin and co. should be too good for the Pies. Richmond by 21

The 3-2 Dockers bid to upset the 4-1 Eagles in the game of the week, the first Western Derby at Optus Stadium. West Coast has a fantastic record against Freo lately and hasn’t lost since round 1. Jack Petruccelle debuts, along with Lewis Jetta he’s an in for Mark Hutchings and Jackson Nelson. The Dockers swap Michael Johnson in for an injured Matt Taberner. The Dockers have some great young pieces including Bailey Banfield and Adam Cerra, but the Eagles are further along and should have an edge here. Nat Fyfe could help Freo rise but the steady midfield of Andrew Gaff, Dom Sheed, and Chris Masten should give good supply to Josh Kennedy and co. and help the Eagles win. West Coast by 33