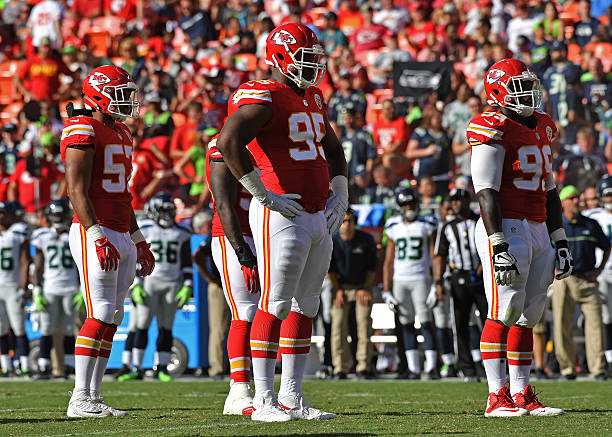 Stopping the run is of the same necessity as running the ball. Without a run game, opponents become one dimensional and are forced to make erratic and frustrated play calls. Stopping the run is psychologically defeating, forcing teams to move away from their game plan. The Kansas City Chiefs run defense was anything but aggressive against the run, giving up an average of 124 yards per game in 2016 – 27th in the NFL.

When allowing under 120 yards rushing, the Chiefs were 6-2; when allowing over 120 yards rushing, the Chiefs were 6-3. Shockingly, that is not a huge difference. The statistical difference, however, comes in the turnover battle. In those games the defense forced two or more turnovers the record was 8-2, including allowing 205 yards rushing to the Jacksonville Jaguars in week nine, but forcing four turnovers. The signs for a successful Kansas City Chiefs run defense will not be in yardage allowed, but a violence that sucks will from their opponents and destroys efficiency in the first quarter.

Kansas City Chiefs Run Defense – Ending the Will to Succeed

The Kansas City Chiefs most brutal performance came in the divisional playoffs against the Pittsburgh Steelers. Although the score was 18-16, and the Chiefs defense capitalized throughout, Steelers running back Le’Veon Bell ran for 170 yards and killed the Chiefs defense by forcing them to stay on the field.

Although ‘a lack of will’ is more philosophical opposed to a physical or tactical football thought, Bell’s performance is the epitome of psychological victory. He ran time and time again, allowing the Steelers to keep the ball on the field and win the time of possession battle 34 to 25 minutes. The Kansas City Chiefs run defense did not stop Bell at the outset of the game, and let the Steelers maintain their offensive game plan, tire out the defense, and put Ben Roethlisberger in positions where he could convert seven third downs.

Thus, the Kansas City Chiefs run defense must stop the run immediately. The Chiefs cannot let teams come into the second-half of games with a running oriented game plan. Naturally, this objective will be harder for a defense oriented toward stopping the pass. The Chiefs secondary is world-class, and now without Dontari Poe and Jaye Howard, the defense is faced with the task of athletically stopping the run. Ironically, the best rush defenses of past years have stopped the rush athletically.

Poe and Howard playing for the Chiefs created the potential advantage to cover up linebacker injuries. Justin Houston and Derrick Johnson were both hurt last year, and missing their athletic play forced young players such as Chris Jones to play a larger role than their developmental stage dictated. However, with all three of those monsters healthier and more experienced in 2017, the Chiefs have a chance to stop the run in classic style.

Athletic run stopping is about the linebackers finding their way through gaps on the offensive line, sealing the edge, and getting quick jumps off the snap. Opposed to a power stuff, where the defensive line does the gap plugging and tackling, the Chiefs rely on their healthy linebackers to work with speed to push the ball.

Statistically, the importance of big lineman up front is a myth. Implication: without Dontari Poe or Jaye Howard, the Chiefs will be alright. Last year the Chiefs only stopped runs under two-yards 37.3 percent of the time; the front line was not as productive as off-season concern would dictate. In 2015, a healthier Chiefs linebacker corps was sixth overall in rush defense, allowing only 95.7 rushing yards a game.

Injury and personnel packages will play an important role to the depth of the Chiefs ability to stop the run. Health plays directly into strategy and scheme fit. With Houston, Johnson, and Tamba Hali fully healthy and consistent, the defense can be played as intended with everyone filling assignments they were signed to fill.

When one key athletic defender goes down, a player who is oriented to a one-dimensional role, opposed to the standard two-dimensional role fills in. Jarvis Jenkins, Rakeem Nunez-Roches, D.J. Alexander, Frank Zombo, and Ramik Wilson make up an excellent backup corps, but do not pretend these are players that can play in a multi-dimensional asset as the starters do.

As asserted above, the importance of the front line directly stopping the run is overstated. However, that is not indicative of the idea the front line improving in their assignment would not functionally improve the run defense. Ideally, the front line should occupy the offensive line to stuff runs within three yards of scrimmage, letting linebackers through to create violent turnovers.

One of the most telling signs of consistency is directional rushing success (credit and many thanks to Warren Sharp at shapfootballstats.com for putting this data together!). Last year, the Chiefs defense allowed 54 percent to be successful. Across the line, the most successful running zone was over the left guard, allowing 64 percent success. Over the center, 56 percent of runs were successful, and the minimum success coming around the edges (nine gap) were 42 percent success on the left, and 44 percent success on the right.

Directional rushing success is important in the 3-4 Bob Sutton defense as a good front three push negates the ability of offensive guards to seal linebackers. Last year Dontari Poe needed to get a bigger push to allow Ramik Wilson to run free. However, part of the problem existed intrinsically in the youth of Ramik Wilson and outside linebacker Dee Ford.

Tangibly, improvement can be had in new defensive lineman Bennie Logan and a healthy Allen Bailey. Tying into directional rushing success, Poe was a player that had a tremendous north and south push, with enough speed to potential as a pass rusher. However, Logan and Bailey trade in speed for better east-west length. Strategically, players with better east-west reach will aid younger, more athletic linebackers who are oriented toward rushing the passer by being able to reach to the lateral guards.

Hence, whereas the overall potential in Poe might be higher, the consistency of Logan and Bailey will support the current roster better and enable a better push on the guards.

A lot has been said regarding the more philosophical merits of the Kansas City Chiefs run defense. Now is time to apply those details to the statistical line to see where the Chiefs need to fall.

Starting with a side note, a good offense is a great defense. The simplicity of a more potent offense will do a part in forcing teams to play from behind. However, a high-scoring offense is not a current luxury the Chiefs have, but the principle ought to be brought up for the importance of discussion.

The more tangible statistics of the Chiefs are going to be seen in yards per carry. In 2016 the Chiefs allowed an abysmal 4.5 yards per carry while in 2015 they allowed a medial 4.1 yards per carry. While the difference is only .4 yards, the results are astronomical. The implication is a team that tackles closer to the line and finishes running backs by tackling backward, instead of letting running backs push forward for an extra half yard. The 2017 Chiefs must finish at the 4.1 yard per carry mark or lower to see playoff success.

Another way to spot successful defense early in games is the amount of running plays against the Chiefs. In 2016, opponents averaged 27.7 runs per game, indicating that teams ran consistently well against them. In 2015, opponents only ran an average of 23.4 run plays per game.

Using this statistic alone does present problems based on year-to-year scheduling and opponents that tend to have more successful running games. Put into full context, however, and the implications are clear. If the Chiefs are going to stop the will to run in the first quarter, opponent run plays should be under 25 per game.

Do the 2017 Chiefs need world dominating efficiency against the run? No. They just need to improve their weaknesses and support assignments across the board. A top ten rush defense is very obtainable if each man stays healthy and plays toward the assignment

Destroying the will to succeed running the ball at the outset of games will go far for the Chiefs overall perspectives in 2017. Not only will this lead to teams passing often, but frustrated passing generating more turnovers. The common theme among championship level defenses is an aggressive, turnover creating, and opportunistic play style.