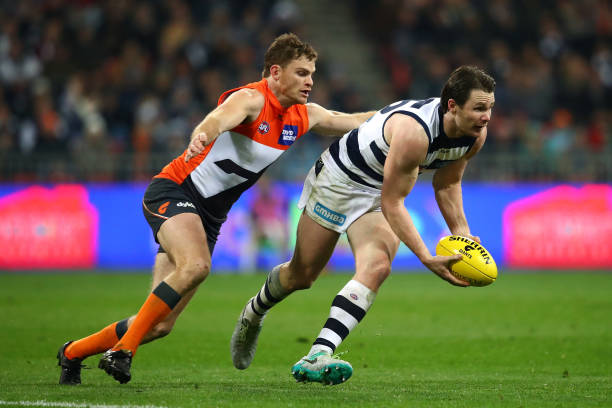 AFL Round 15 was another thriller, so let’s get straight to the match review.

GWS vs. Geelong Ends in a Draw

Trailing in the second half of a close contest, the GWS Giants came back, and in a fight to the finish, secured a 68-68 draw against Geelong, as their key forward Tom Hawkins shanked a shot from well inside 50 meters that would have given the Cats a road victory. In a low scoring contest where both teams missed opportunities to score, and both teams were missing some of their best players due to injury, Lachie Whitfield and Patrick Dangerfield shined. Whitfield notched 27 disposals, 8 tackles, and had a key goal, he was joined by teammates Callan Ward, Josh Kelly, and Jon Patton. Ward and Kelly had more than 30 disposals each, and big Jon kicked four goals.

For the Cats, who were slight underdogs but now look to be clear premiership contenders, Dangerfield led the way with 45 disposals, Sam Menegola had 33, while forward Wylie Buzza kicked two goals on debut. A better performance from Hawkins and the Geelong forward line would probably have won them the contest, they simply couldn’t score enough late to prevail.

Despite home field advantage the Port Adelaide Power never got into it against Richmond, falling to the Tigers 76-63 in a sloppy contest where they collapsed in the final quarter. It was a seminal night for Richmond, as they finally won a final quarter, and key defender Alex Rance overcame a tag to lock down Power forward Jackson Trengove in the second half. Chad Wingard had 39 disposals but no goals for Port, Charlie Dixon was held to just a goal, and only Sam Powell-Pepper had a multi-goal game with two goals.

For Richmond, Dustin Martin continued to rack up Brownlow votes, he had 36 disposals, and a goal, all while attracting attention from Power defenders. Kane Lambert had 33 disposals, Dan Butler kicked three goals, and new Tigers forward Tyson Stengle kicked two goals as the Richmond smalls showed up when it mattered, the Tigers now inside the top 4 late in the season.

Trailing by a significant margin into the final term, and trailing throughout the game, everyone expected the Brisbane Lions to suffer another loss, but the young Lions pulled off an incredible comeback, beating Essendon 90-82, despite the Bombers huge edge in scoring chances, in the end their woeful kicking cost them a shot at top 8. Dayne Zorko, Alex Witherden, and Tom Cutler led the efficient Lions, combining for almost 90 disposals, Zorko had 2 goals, and both Eric Hipwood and Rohan Bewick had a huge day out, combining for 7 goals.

Despite three goals from Joe Daniher, a solid game from the veteran Jobe Watson who led the Bombers with nine tackles, and 62 disposals combined from Michael Hurley and Brendon Goddard it wasn’t enough for Essendon, in their most embarrassing loss as a club in years.

By a margin of 85-50, the Sydney Swans broke down the Melbourne Demons, boosting their top 8 hopes, while breaking Melbourne’s momentum. Early on Demons fringe player Tom Bugg knocked out Callum Mills with a swift punch, and that seemed to throw the Dees off. Sydney’s goalkicking was a dumpster fire early, and they ended up going 11.19, damaging their percentage a bit. The Swans still figured it out though, keeping the ball inside forward 50 most of the match.

Luke Parker had 38 disposals, Buddy Franklin had 4 goals, Tom Papley added two more, and the likes of Jake Lloyd were solid in the backline. Only Michael Hibberd (33 disposals), and Tom McDonald (2 goals) were notably in-form for Melbourne, as they also suffered an big injury with Jack Viney going down.

Carlton was in it for almost all of the game as their backline kept the Adelaide Crows at bay, the Crows eventually winning 89-77 despite falling behind at one point in the final term. It was a close game all around, and shows that Carlton is very much improving as a football club. Led by Bryce Gibbs and Sam Docherty, who combined for 60 disposals, 2 goals, and 19 tackles, they simply could not be contained. Marc Murphy, Patrick Cripps, and Liam Jones also had good games.

Josh Jenkins kicked three big goals for Adelaide, but their potent forward line was not at its best, the Crouch brothers rose up when it mattered though, combining for nearly 60 disposals, and 15 tackles in a best on ground co-performance. Tex Walker, Rory Sloane, and Eddie Betts will need to be better moving forward.

The West Coast Eagles were clearly better than the Western Bulldogs, but they only won 87-80 as they collapsed in the final term, and the Bulldogs played good footy for the first time in a while. Andrew Gaff was instrumental, notching 42 disposals, Dom Sheed had 28 as he continues to come into his own in the Eagles midfield, while Jack Darling kicked three goals, and Malcolm Karpany also had three goals in the game of his career. Ruckman Nathan Vardy was also fantastic in the final quarter for the Eagles.

The Bulldogs were sloppy and wasteful with their kicking moving forward, and it cost them, Lachie Hunter, Mitch Wallis, and Jack Redpath combined for six goals on the day though and the Dogs deserve credit for fighting back. Their top 8 hopes are slipping by the day though.

The Gold Coast Suns could have won by more, but they still secured a solid 118-99 victory over the struggling North Melbourne Kangaroos. Gary Ablett had 37 disposals in his 300th game, Tom Lynch and Ben Ainsworth showed the Suns have a bright future, kicking nine goals combined. While David Swallow kicked two goals to outshine his brother Andrew, who plays for North. Jarryd Lyons continues a slew of unheralded performances, leading the Suns with 39 disposals.

Seven goals combined for Ben Brown and Jarrad Waite weren’t enough, as the Kangaroos were sloppy early and couldn’t overcome a slow start. They run the risk of ending the season with the wooden spoon.

Hawthorn were simply better than Collingwood, winning 118-94 thanks to a strong final term of six goals. Collingwood’s finals hopes are in shatters, and died again with their forward line, despite 32 disposals from Jordan De Goey and six goals combined from Mason Cox and Alex Fasolo. Jamie Elliot in particular needed to be much better. Tom Mitchell (35) and Ryan Burton (29) led the Hawks in disposals, while Mitchell joined five other Hawks with two goals in a true team performance where forward James Sicily was also key.

Fremantle’s finals hopes also lie in tatters, as they lost a must-win game vs St. Kilda 89-80, the Dockers surrendered a late lead despite seeing more of the footy. Josh Bruce kicked the winning goal, ending the game with three goals for the Saints, Jade Gresham also had three while Seb Ross again led the Saints with 34 disposals. 32 disposals and 6 goals was an incredible performance from Michael Walters, but with Aaron Sandilands injured, and Nat Fyfe again poor, the Dockers couldn’t find a way to keep the lead and win.