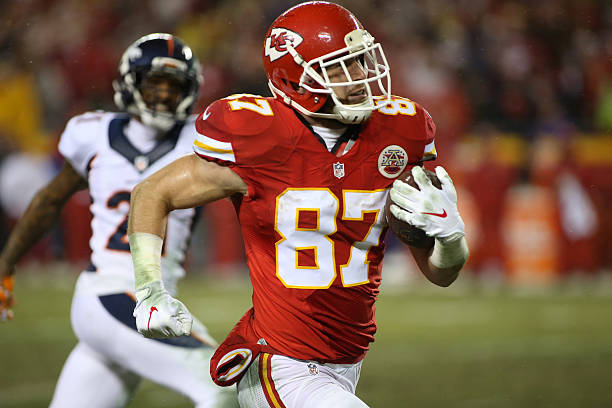 If you have missed any ‘Implication of Success’ articles, catch up now! Quarterback, Offensive Line, Wide Receiver

Chess is a game of strategy, and while tradition exists in the use of chess pieces, there are those players who strategize with a specific unit better than tradition has dictated. The same is true of the chess match that is the NFL. Over the course of time, coaches have evolved the game by making a meek rook the dominant component of their strategy. The Kansas City Chiefs chess maestro is Andy Reid, and during his tenure as head coach the tight end position has evolved from a rook into a king. In 2017, the dominance of Travis Kelce and the physically towering Kansas City Chiefs tight ends will be central to team strategy. Whether in passing or running schemes, Andy Reid will use the tight end as the central tenant of a dynamic offense.

Kansas City Chiefs Tight Ends – Imposing the Will to Win

Every tight end in the Chiefs system is important; however, make no mistake that Travis Kelce is essential to the Chiefs success. Not only does his positional alignment on the offense become the core to developing plays, but his production as Alex Smith’s number one target is crucial to the team. In 2017, his production will only be extrapolated with the absence of Jeremy Maclin. Additionally, do not forget Kelce’s memorable on the field moments. (Exhibit A and exhibit B).

Kelce is arguably the second best tight end in the NFL, right behind Rob Gronkowski. If you are a super Chiefs fan, the argument could theoretically be made that Kelce’s health makes him the top tight end. Silly rankings aside, Kelce is a top tight end due to the production for the Chiefs and mismatches opposing linebackers are forced into.

Although not a physical specimen in his rookie season, Kelce quickly developed in his second year of play. His power makes up for the lack of athleticism, and over time it is clear he has added power to his core. The best tight ends (such as Chiefs legend Tony Gonzalez) play the game with leverage, or the finesse of a basketball power forward. Linebackers cannot keep up with his crisp routes, and a 6’5” frame allows for physical superiority. Corners simply fail when they try to combat a player of his stature – most end up on the ground regretting their life choices.

The final part of Kelce’s game that is not praised enough is toughness. Toughness is an exemplary leadership quality that can support the entire cast of receivers. Kelce’s own words regarding his labrum tear exemplify it enough.

“I don’t like to harp on playing with an injury patting myself on the back because there’s a lot of guys playing without a labrum in the league. It’s more common than you think. Mine was just more aggressive where I had the full labrum tear and it was popping out the back a little bit so I made sure in the offseason I got that thing taken care of.”

One move was made clear from the release of Jeremy Maclin. The Chiefs are going all in on their young receiver crew, specifically Tyreek Hill. Andy Reid will naturally re-envision the Chiefs 2017 offense to push a more explosive and diverse play set. Part of these changes will be seen in the way tight ends are set on and off the line of scrimmage. While more changes can be observed in training camp, pre-season, and definitely the second and third quarter of regular season games, a few good conjectures can be thrown out.

In the blocking scheme, Travis Kelce has evolved as a capable inline blocker. At Cincinnati, his physical stature stood out. Gavin Escobar and Demetrius Harris, however, are not developed in the blocking game. The reliance upon inline blocking schemes does pose a risk due to the lack of a true blocking tight end. Schematically, Andy Reid will rely on Travis Kelce’s side, two-tight end sets, and the tackles sweeping out on outside runs. With six tight ends on the roster, and very well ending with three or four by the end of cuts, the Chiefs can move to more triple tight end sets with offset tight alignment.

Alex Smith will target Travis Kelce predominantly as he can come out of a slot receiver position, or off the line of scrimmage. Expect to see more two-tight end sets with Kelce as a slot receiver and Escobar lined up on the line of scrimmage. This allows for Kelce to operate as a true slot receiver and deep-post target. Escobar may have had only four receptions last year for the Dallas Cowboys, but he will have the potential to take over a check route. He stands big enough to chip defensive ends on play-action passes, and then leak into under routes.

The third tight end set will be a battle between Demetrius Harris and prospects Byrd, Ross Travis, and Orson Charles. (More on the battle below). Regardless of who gets the slot as a third tight end, they will serve predominantly as a bigger bodied decoy. Ideally, it entails getting a tight end to remove a linebacker from either a running back (Spencer Ware, Kareem Hunt) or Tyreek Hill lined up as a H-back. This scheme can be observed with the New England Patriots – a second tight end or receiver lined up in the Y position often runs a route to remove a linebacker from tracking running back James White as he leaks into a wheel route.

The Final Cut and Production

The first two tight ends are set in stone, barring a catastrophic injury or surprise training camp production. Travis Kelce will be tight end one, as he can line up on the line of scrimmage, in the Y, or the slot. The second tight end will be a battle between new signing Gavin Escobar or Demetrius Harris. The early nod goes to Escobar due to Harris being arrested on a felony marijuana charge. (He was never officially charged.) No matter, Harris needs to show up and win the job. He has been in Kansas City since 2014 and has yet to turn into a productive tight end.

Kelce needs to repeat and capitalize on amazing production from last season. In order to become the number one receiver on a productive Chiefs, he needs to catch 90 passes for 1,100 yards and five touchdowns. The second tight end does not need to be overtly productive, but reliable for a crucial touchdown or two. Anytime they get a look, they need to secure the ball upward of 200 yards.

More importantly, the second tight end needs to be aggressive in boxing out bigger linebackers. Crisp routes will create clearing routes. Their ability to chip combines with the third tight end, which will be a much tighter battle. Ross Travis is the leading favorite due to the fact he is familiar with the Chiefs, heading into his second season. Emmanuel Byrd is the first man out because of his rookie pedigree, but he might be able to battle out Orson Charles due to that same factor. If the Chiefs keep a fourth tight end, which would not be surprising due to the importance for 2017, Byrd may find himself as a project or with a position on the practice squad.