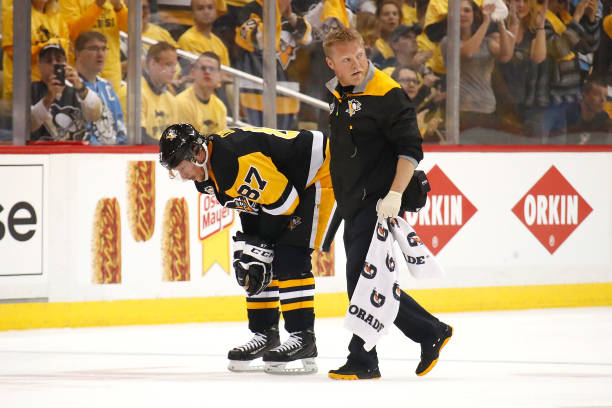 If not now, when? How many more hits to the head should Sidney Crosby take before he at least considers retirement? The answer is a resounding zero.

Crosby sustained his fourth concussion on Monday, May 1st in Game 3 against the Washington Capitals in the Stanley Cup Playoffs. He left under his own power, but took some time to get up.

January 2011 – There are two parts to this injury. The first happened on January 1st, 2011 during the Winter Classic. David Steckel skated into Crosby and made direct contact with his head. He left the game under his own power. Crosby then played in the Penguins next game against the Tampa Bay Lightning. After taking a high hit by Victor Hedman he left the game.

That was the last game Crosby played that season. He finished with 66 points in 41 games. Pretty incredible.

However, that concussion also delayed his start to the following season. He missed the beginning of the season and didn’t return to the lineup until November 21st, 2011.

December 2011 – After returning from his first concussion, Sidney Crosby played eight games between November 21st and December 5th, 2011, before being removed with concussion symptoms. Those were believed to be the result of an elbow from David Krejci. He was also diagnosed with a soft-tissue injury in his neck that was causing swelling of his top two vertebrae after that hit. He didn’t play again until March 15th, 2012.

October 2016 – After remaining relatively healthy for the next four years, apart from a broken jaw in 2013, Crosby sustained another concussion in practice. He only missed a short period of time, returning to the lineup on October 25th, 2016.

And here we are today.

Just four days after being diagnosed with a concussion, Sidney Crosby participated in a full practice with the Penguins on Friday. The Penguins captain missed Game 4, and he will be a game-time decision for Game 5.

Here's an idea of the type of drills Crosby is taking part in. Looks pretty good to me. pic.twitter.com/bS4mfZID32

‘But Sidney Crosby is the best player in the world, he can’t retire.’

That’s exactly why he can.

Is there anything else Crosby can do to solidify his legacy any further? If he wins another Stanley Cup, or another Hart trophy, does it really change the fact that he is, and will always be, one of the best hockey players to ever play the game? No.

So, it might be time to think about his future as a human being and not a hockey player.

Dr. Charles Tator, the director of the Canadian Concussion Centre at Toronto Western Hospital told reporters, “When there have been multiple concussions, the chance of having persisting symptoms goes up terrifically, so we’re especially careful about helping people avoid further concussions.”

“If he were an amateur, we would probably tell him to hang up his skates.”

Former NHL forward Keith Primeau had four concussions himself. He tried to return for a year after sustaining his fourth concussion, and eventually retired from the game. Primeau told The Canadian Press, “There’s just so many variables that go into the decision making (of whether to return). When I look at somebody like Sidney who has had four concussions, I immediately go to, ‘What are you waiting for?”‘

Crosby turns 30 years old this summer. He is still young. But the likelihood of a full recovery goes down with every concussion sustained. With every repetitive trauma, the recovery time is longer, and if you continue to put yourself in situations where you are likely to sustain trauma, you might get to a point where you won’t be able to recover. At that point, your whole quality of life goes down.

There is also evidence to indicate that people with traumatized brain tissue will be at higher risk of developing neurological conditions and problems as they age. Look no further than the plethora of former NFL stars that have had issues, or the late Muhammad Ali, who had Parkinson’s Syndrome.

The hard part for every athlete is being able to see the risk and being able to take yourself away from the game you love. For most athletes, Crosby included, the sport they play is their whole world. There is nothing that they would rather do than play. But, at some point, you need to take a step back and look at all sides of the picture and determine if the risk is worth the reward.

For Crosby, who doesn’t really have anything else to prove, it might be time to hang up the skates and get while the gettin’s good.

via Last Word on Hockey, by Rachel Halliwell