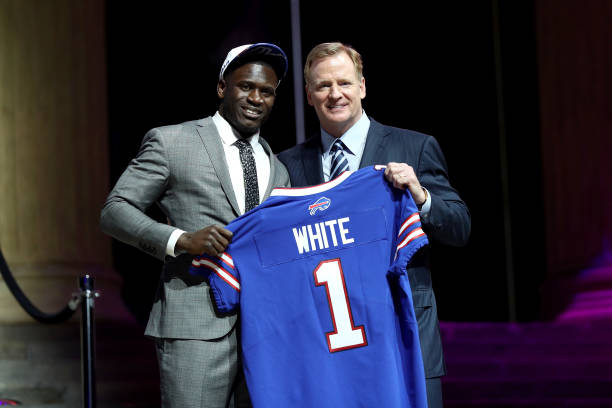 With the 2017 NFL Draft in the books, it’s time to give an evaluation as to how all 32 teams did in addressing their positional needs. Here, the Buffalo Bills are the focus. Buffalo made three trades over the course of the draft, the details of which can be seen below.

In the immediate aftermath of the draft, the front office underwent quite a bit of turmoil. On Sunday morning, team owners Terry and Kim Pegula announced the firing of general manager Doug Whaley in addition to the team’s entire scouting staff. Whaley had been with the team in varying capacities since 2010.

But before Whaley’s unceremonious departure, the Bills added six players to the roster via the draft.

This one’s a toss-up between the Bills first two selections, Tre’Davious White and Zay Jones. Keeping it simple and going with the player drafted in the first round, the nod goes to White. Cornerback became one of the Bills most glaring needs after Stephon Gilmore departed for the Patriots in free agency. But the team might not miss much of a beat bringing in White, who should make an immediate impact.

If his collegiate career is any indication, that’s not much of a surprise. White started all four years at LSU, a school that’s produced its fair share of standout defensive backs (Patrick Peterson and Tyrann Mathieu, anyone?). Though he only finished with six career interceptions, his 14 pass breakups in 2016 led the Tigers and was eighth best in FBS.

White should form a formidable cornerback partnership with Ronald Darby. Both have similar skill sets in that they excel as cover corners with solid burst and athleticism to get to the ball and make plays. Darby himself enjoyed an impressive rookie campaign in 2015. His 21 passes defended that year was the sixth best total in the NFL. His new teammate in White will look to make a similar mark as a first-year player this coming season.

The Head-Scratcher: Why No Tight End?

2017 was one of the best classes for tight end prospects in years, possibly ever. And with Charles Clay far from the most effective downfield pass catching option, it made sense to draft a player capable of making an impact in that regard. But in the end, the Bills decided to not address this need.

Failure to do so is partly what drags the Bills overall draft grade down. A player such as David Njoku, Evan Engram or Adam Shaheen could’ve immediately improved the unit. Jake Butt fell due to injury but was there in the fifth round for the taking. Even Bucky Hodges was available when the Bills were on the clock with their final pick of the draft.

In the final analysis, tight end is clearly the most glaring absence from this year’s Bills draft haul.

Despite uncertainty over his contract situation in the off-season, Buffalo reworked their deal with quarterback Tyrod Taylor. And there’s no doubt about his status as the incumbent starter in 2017. Nevertheless, most observers expected the Bills to address the position in this year’s draft.

But the selection of Peterman in the fifth round certainly raised some eyebrows. Though he played in a pro-style offense at Pitt and impressed mightily in the Panthers upset of Clemson, Peterman remains a developmental project at this point. He’ll certainly have a chance to compete for the backup role behind Taylor with T.J. Yates and Cardale Jones. But whether he can emerge as a legitimate starter down the road remains to be seen.

The Bills need a lot of help on the right side of the offensive line. John Miller was functional at right guard, but nobody on the Bills roster realized much effectiveness at right tackle. Case in point: Pro Football Focus gave the primary starter there, Jordan Mills, the third worst grade among tackles who played over 1,000 snaps during the season.

Dawkins is a versatile player with the chance to step right in and get starter reps out wide at tackle or tucked in at guard. His athleticism and lateral quickness is one of his more impressive traits. It was on full display during the Combine when he ran a 7.30 second three-cone drill which ranked second best among offensive linemen. Though he needs to reduce his tendency to be grabby in pass protection, Buffalo is getting a quality player at the position with the ceiling of regular starter in this league.

Most Likely To Turn Heads in Training Camp: Zay Jones

The Bills lost nearly one-third of their production in the passing game when Robert Woods and Marquise Goodwin departed the team in free agency. Part of the problem was Sammy Watkins inability to stay healthy as he managed just 430 receiving yards. But it’s pretty clear the team needed to draft a player who can immediately step in and assume the second receiver role.

Zay Jones possesses all the tools necessary to be that player. Last year, he finished with the second most receiving yards in the nation (1,746) while setting an all-time FBS record for receptions in a single season (158) and for his career (399). He catches the ball effortlessly and has burst to zoom past defenders after the catch. The one thing he’ll need to improve on is his ability as a vertical threat instead of overly relying on underneath routes. But putting it all together, he’s a surefire instant impact player in Buffalo’s receiving corps.

The Bills drafted two other players, both of whom played linebacker in college. They took Matt Milano out of Boston College with one of their two fifth round selections. Ironically enough, that pick came from the Patriots as compensation for them signing running back Mike Gillislee to a restricted free agent tender. In the sixth round, they nabbed Tanner Vallejo from Boise State.

Both are depth adds to a linebacking corps which lost Zach Brown in free agency and had their fair share of injury issues last year. Only a single returning Bills linebacker, Preston Brown, received a ranking from Pro Football Focus. And it wasn’t flattering considering he ranked 66th among players at the position.

Milano is a converted safety and as such is a little undersized for an NFL caliber linebacker. But he plays with a passion and intensity coaches like to see. His best fit for the Bills is on the weak side in defensive coordinator Leslie Frazier‘s 4-3. Vallejo has a similar build to Milano and has value as a coverage option in subpackages. But both should make an immediate impact on special teams.

For the most part, the Bills effectively addressed positions of need in this year’s draft. The receiving corps and secondary is immediately better with the additions of Jones and White respectively. Dawkins has all the makings of a starting caliber right tackle/guard at the next level. And Peterman, though a project, has a strong arm and solid understanding of pro concepts.

Not drafting a tight end in a class full of potential game-changers at the position was puzzling. Despite adding Micah Hyde and Jordan Power in free agency, bringing in another safety wouldn’t have hurt either. But overall, Buffalo boasts an improved roster compared to before the draft. With the 2017 roster taking shape via free agency and the draft, the drive towards erasing a now 17-year postseason drought begins now.