It’s now late April, and with all the Canadian NHL teams on the golf course and Sportsnet airing depressing commercials, it is officially Draft Lottery season. With the availability of the endlessly amusing lottery simulator, many hockey fans’ fears are growing that something as terrifying as this could happen:

With that, the possibility is sinking in for Toronto fans that the Leafs first round pick could very well fall to fourth with the new lottery system, despite having the highest chance of winning the first overall. I ran the simulator 100 times, and they were unlucky in 48 of them:

Now, if that does happen and the Leafs find themselves fourth on the draft board, the question then becomes whether or not they stay there.

There’s an argument to be made for trading the fourth overall pick. The players available there – probably Matthew Tkachuk or Jakob Chychrun – are incredibly talented, and will be a huge asset to their team down the road, but are not in the same class as the pair of Finns ranked second and third, and definitely can’t touch Auston Matthews at the top.

Matthews could turn into a generational talent, and both Patrik Laine and Jesse Puljujarvi are far too good to pass up. Beyond them, though, pretty much every other player ranked in the top ten is similar in skill level, and really there will be little difference between whoever goes fourth and, say, eighth.

If the Leafs First Round Pick Falls to 4th: Historical Precedents for Trading Down

Toronto picked fourth last year, and got a gem in Mitch Marner. Now, the prospect pool is quite deep – a fact proven by taking one look at the Toronto Marlies’ roster – and ideally what the Leafs need is that one franchise player to be the cherry on top. If the lottery balls don’t fall their way, though, it makes a lot of sense for them to test the market on their pick.

If the Leafs were able to flip the fourth pick for, say, one in the latter half of the top ten as well as a later pick, why wouldn’t they? There will still be a great player available after fourth – Olli Juolevi, Alex Nylander, and Michael McLeod are all names that could go pretty much anywhere from fourth to tenth. Plus, they could get another pick in the second or third round, where Mark Hunter and co. could work some more of their scouting magic.

So, it’s fun just to consider how things could play out if the Leafs first round pick does end up on the trade market. Let’s take a look at all the instances of top-five picks being traded at the draft.

The Capitals traded up here to get Bobby Carpenter, who played five full seasons in Washington, with very respectable numbers. He had 53 goals in the 1984-85 season, but that was his peak as he went on to play briefly with the Rangers, Kings, Bruins and Devils en route to 1178 career games played, with 728 points. Joe Cirella played in 828 games, eight of his seasons with the Rockies and Devils after they moved to New Jersey. Rich Chernomaz played 51 NHL games to Eric Calder’s 2. Overall, Washington ended up with the better player, and the Rockies weren’t really any better off for trading down.

This trade is mostly interesting for the names involved. Yes, that’s the same Eddie Olczyk who calls the NHL on NBC, as well as the EA NHL games. He was a pretty good player, with 794 career NHL points. He only played three seasons with the Blackhawks, though. Craig Redmond, cousin of the great color analyst Mickey Redmond, never really amounted to much, calling it quits after playing in parts of five seasons. My favourite part of this trade, though, is Tom Glavine – Hall of Fame baseball player Tom Glavine, that is. He never suited up for the Kings, unfortunately.

Wayne McBean was a promising enough defenceman, but never really materialized for L.A., a wrist injury forcing him into retirement after 211 NHL games. The North Stars may have won this one, as Dave Archibald ultimately played in about a hundred more games, and Kevin Kaminski appeared in almost 200.

This is the first trade involving a Leafs first round pick! New York traded up to grab tough defenceman Darius Kasparaitis, who was a regular for many years on the Isles’ and then Penguins’ blueline. Brandon Convery was an absolute bust for the Leafs, but they might wish they’d hung on to Jim Carey. They traded the 32nd pick later to the Washington Capitals, who selected the future Vezina winner.

Oh boy. Well, Viktor Kozlov did turn into a regular NHLer, with 897 games played. Ville Peltonen had a big league career as well, very little of it with the Sharks though. However, there’s really nothing that can be said to redeem this deal. These three players absolutely do not add up to one hall of fame defenceman. Not even close. This one is rough for San Jose.

The Sharks kind of learned from ’93, as this trade worked out much better for them. The Predators jumped up one spot to draft perhaps one of their franchise’s best players, but San Jose did really well here. Brad Stuart played six seasons in teal before being the major piece of a trade that brought a future hall-of-famer in Joe Thornton to the Sharks. The Preds also paid quite a high premium to move up just one spot, surrendering an early second-rounder that turned into one of the NHL’s weirdest 50-goal seasons of all time.

I know, technically this one is breaking the rules as the Blackhawks didn’t really trade down. But it’s important for context, because it’s part of the larger picture of Brian Burke’s all-or-nothing approach to the 1999 draft.

That Pavel Brendl pick got shipped away from the Vancouver draft table pretty quickly, as they put together this package for the first overall pick – a package which, in my opinion, would cause most NHL GMs to hang up immediately if it was offered today.

Of course, Burkie didn’t hang on to that first pick, though. He knew from the get-go that he wanted second overall, to go with the third pick which Vancouver already owned, so he could draft the Sedin twins. The Canucks flipped that first pick to the Atlanta Thrashers, getting an extra third out of them in exchange for moving down a spot. The Thrashers, with the first pick in the franchise’s first ever draft, proceeded to pick one of the biggest draft busts in NHL history, now famous for just one thing.

This one breaks the rules too, but it’s fun to see how many times that Brendl pick was flipped. Disappointingly, he too turned out to be a bust after all this drama. He never even played for the Rangers, and as a journeyman finished his short NHL career with 78 games played, split between the Flyers, Hurricanes, and Coyotes.

This trade is interesting because Tampa didn’t get a later first-round pick, since the Flyers didn’t have one to give. Pitkanen was a highly-touted defensive prospect, vying with Jay Bouwmeester for the title of best blueliner available. He never really materialized, though, struggling with injuries and failing to meet expectations, before leaving the NHL to play in Finland. Neither of the picks Tampa received worked out either, but Fedotenko turned out to be an instrumental piece of the 2004 playoff run, scoring the Stanley Cup-winning goal in game seven of the Final.

Speaking of Jay Bouwmeester, he too was drafted with a traded pick. The Panthers agreed to swap with Columbus, on the condition that if the Blue Jackets had a higher pick in 2003, they could swap again. As you’ll see below, the Jackets did not have the higher pick in 2003, making this deal effectively a one-for-one swap of picks. Columbus drafted their franchise player in Rick Nash, and the Panthers got an elite defenceman in Jay Bouwmeester. Pretty even deal on both sides, really, but Nash meant much more to the Blue Jackets organization and was there longer, so they’d probably win this one.

Yes, the Florida Panthers traded the first overall pick two years in a row. It made sense at the time, though, as they still had a great young goalie in Roberto Luongo at the time, and therefore could benefit from trading down for some extra assets. Nathan Horton was a good player for the Panthers, who had scoring talent that was unfortunately hampered by the injuries that plagued him throughout his career. Samuelsson was meant to be a solid roster player, but his one season in Florida was also cursed by multiple injuries. Pittsburgh won out here, partly by chance, coming out with their goalie of the future in Fleury.

This one stings for Columbus, as they gave up a solid future player, currently with 750 NHL games played and counting, in exchange for a guy with a Star Trek name and a career minor leaguer. The Blue Jackets lost this, from pretty much every angle you look at it.

It’s funny that the most recent case of a team trading down from a top-five pick involves the Toronto Maple Leafs, albeit in the opposite direction to where they may move this year. It also may be the most relevant historical precedent. Jumping a few spots down from fifth to seventh, taking a good player top ten while picking up a couple extra assets on the way, is exactly what the Leafs may be looking at doing this year. Luke Schenn and Colin Wilson are probably similar in value, although Toronto did somehow manage to get James van Riemsdyk out of the Flyers for Schenn. So, why not move down a bit to take a similarly talented player, as well as two shots at a late-round gem (the Islanders were unsuccessful with both, but the point stands)?

This is a hot-button topic among Leafs fans, and it seems a lot of them disagree with me:

Polling #Leafs nation: if the Buds end up with the 4th overall pick, should they trade down? #TMLtalk

However, I stand by my case that, unless they can draft Matthews, Laine or Puljujarvi, there’s no player available from 4-10 that’s worth passing on extra assets. Admittedly, a lot of the historical precedents seem to be evidence against trading down, so I’m not entirely sure why I did this (it was really entertaining). Regardless, it’s clear that this kind of deal can be made, and should at least be considered.

But then again, it may turn out not to be a problem after all: 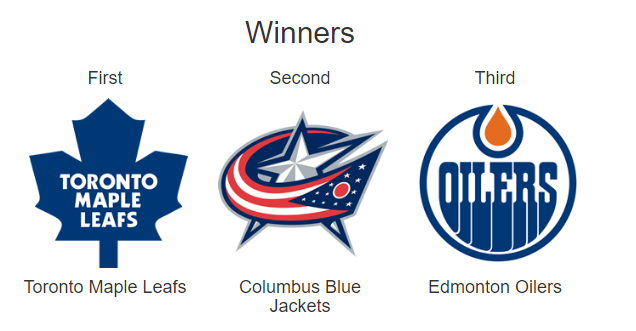