The 2015 NFL Season is almost here, and, to go along with that, so is fantasy football. Most of us have already chosen our leagues/lineups, but for the late registration, I’m going to cover one particular area of fantasy football.

Teams like the Seattle Seahawks and Buffalo Bills are well known for having elite defenses these days, and rising stars include the Cleveland Browns and Denver Broncos. But perhaps out of all 32 teams, one defense remains under the radar.

That would be the Minnesota Vikings.

Surprised? You shouldn’t be. Under new head coach Mike Zimmer, the Vikings defense has taken a significant step in progression. During his time with the Cincinnati Bengals as the defensive coordinator (2008-13), Zimmer raised four teams that finished in the top ten for fewest points and yards allowed, including his last three seasons as DC in Cincinnati.

So when the Vikings’ decided to offer Zimmer the head coaching position, it was the opposite of a curveball. This was a team that in 2013 was 31st in yards allowed and 32nd in points per game conceded. There was nowhere to go but up in the city of Minneapolis.

Needless to say, Zimmer’s work in his rookie season on the defense was incredible. In 2014, the Vikings finished 14th in yards allowed and 11th in points per game given up, a dramatic improvement over 2013’s disastrous results.

Below are two charts explaining the reasons for this. Both charts consist of yards and points per game given up on defense, and any improvements or regressions from the 2013 season to 2014.

First, I’ve charted the highest rank increase of yards given up.Green numbers=increase in rank, yellow=rank did not move at all, and red=decrease in ranking. For example, The Kansas City Chiefs ranked 24th in yards allowed in 2013, while allowing the seventh fewest in 2014. That’s a 17.0 Rank Increase (Rk Increase). 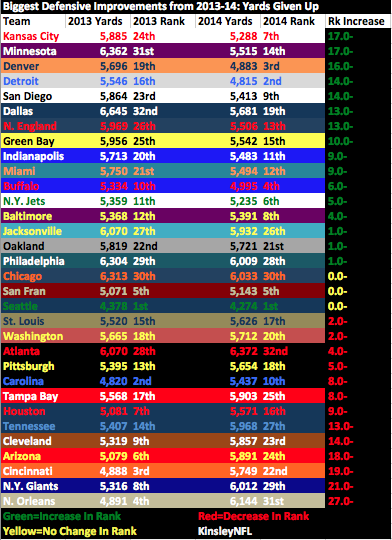 The Chiefs and Vikings both moved up 17 spots from 2013-14, and thus tied for the highest rank increase in yards allowed. No comment about Rob Ryan’s New Orleans’ Saints defense.

Next, I’ve charted the highest rank increases for points per game given up. Same rules apply. 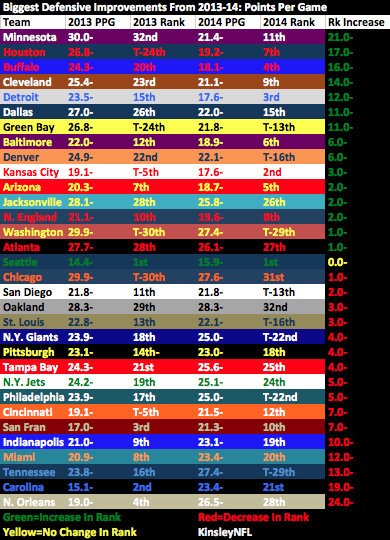 Still no comment on The Big Lebowski’s New Orleans Saints’ defense. It’s also nice to see the Cleveland Browns high on a chart that isn’t dubious in any way.

Back to the Vikings. their +21 rank increase is astonishing, considering Zimmer implanted his defense in his rookie season as a head coach. Going forward, the expectations are for Minnesota to get even better on that side of the ball, and they hope Zimmer can take them to the promised land.

Fantasy owners should hope the same.

The young talent also deserves a mention. Rookie outside linebacker Anthony Barr had a defensive rookie of the year (DROY) type of campaign in 12 games before his season was cut short due to injury. In his debut season, Barr constantly forced pressure on the quarterback, and disrupted pass completions or stopped them for minimal gain. One particular highlight included a game winning fumble return for a touchdown in overtime against the Buccaneers. A healthy Barr should be able to progress and make Minnesota’s front seven better.

Cornerback Xavier Rhodes enters his third season with plenty of promise, and the team is hoping first round pick Trae Waynes, out of Michigan State, will be a DROY candidate.

Most of these games should be winnable, especially the ones against St. Louis, Kansas City, and vs. Chicago due to the home field advantage. You can even argue teams like Seattle and Green Bay might have difficulties adjusting the offenses (due to Seattle’s limited receiving corps and Green Bay coming in without Jordy Nelson), though that seems like a bold conclusion in of itself.

As for special teams, there’s not a lot to suggest your fantasy roster will be damaged if they do not score, though we should never rule out Cordarelle Patterson returning kicks again.

All in all, the Minnesota Vikings in 2015 are not a team to take lightly, and their up and coming defense is a big reason for that. That’s what makes the 4-3 roster the sleeper fantasy team of 2015.

US National Team Chip Shots – All Eyes on Mexico
Is Eugenie Bouchard Ending Her Terrible Run of Form?