(Harrison, NJ) The Red Bulls home opener was a coming out party. Jesse Marsch talked about his philosophy and team goals heading into the season. Week 1’s game against Kansas City was a sneak peek, but that mentality was on full display on Sunday against the Red Bulls biggest rivals. New York clogged the midfield while the backline played off the shoulders of the D.C. forwards, and United had no answers. Two games in, a couple of things are starting to take shape, and so far, I like what I see. Let’s take a look, shall we? RBNY v. DCU: Three Things I noticed.

Last week I talked about Bradley Wright-Phillips needing to be more involved offensively. I was not referring to his lack of shots in the SKC game, but rather his hold up play and connecting with the midfielders. Well, maybe he read the article, because this week he played that role to perfection. Of his 29 pass attempts, he completed all but two. You read that right. With just under 30 passes, he connected on 93.1%. That allowed New York to control possession and pick their spots when going towards goal. Take a look at his heat map. 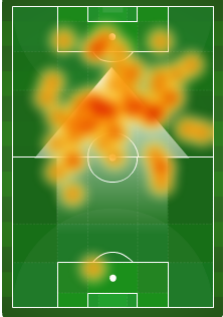 As I mentioned above, BWP needs to act as a pivot for the offense. His activity is just underneath the box for the most part, and throughout the center of the field. This is exactly what you want to see from him. While he was stifled in higher positions last week, he dropped back a little bit further and found the game at RBA. This put Lloyd Sam in great positions throughout the day. Zizzo was a little less offensive, but he also benefited from the space created by the backline pinching in and playing a bit higher than they were comfortable. Good show Bradley!

Let us take a minute to reflect on the two most important players in the side. While it is no surprise that Dax McCarty is stepping into his role as captain very nicely, his central partner Felipe is more than making up for the loss of Eric Alexander. Felipe had the second most recoveries on the team (11, second only to Dax’s 12), and he had the second most tackles won on the team. The insurance goal was created by Felipe reading and taking advantage of a poor play by Davy Arnaud. Dane Richards chased Sean Franklin down the left wing but ultimately lost out to Franklin who was able to recover possession. Franklin played the ball to Boswell, who played it forward to DeLeon. DeLeon dropped the pass back to Arnaud who sprinted into the middle of the field. Arnaud managed to get past his defender (Kljestan) but played the ball just too far in front of him. Felipe read it and just got a touch on it to break up the play and start the counter. The rest is history. Felipe’s contributions so far have been much less eye catching than Dax, but he is proving to be an immensely important midfielder for this team.

With the news of the injuries to Roy Miller and Ronald Zubar, many Red Bull fans understandably worried about who would be stepping into the lineup. Their concerns were not elated when it was revealed that youngster Matt Miazga would be taking the reins. Matt’s lack of experience and occasionally bad decisions in previous appearances had the hearts of fans fluttering. That may have changed slightly after the game. Miazga partnered very well with the veteran Perinelle. Their stats for the game were also nearly identical, although Perinelle held the edge for pass accuracy. With the exception of one poorly timed tackle early in the game, and a very questionable penalty at the death, Miazga looked incredibly poised. His physicality was on full display any time he challenged Jairo Arrieta. Ben Olsen was very critical of his team’s first half display, but a lot of the issue falls on his game plan. In my match preview, I talked about how D.C. tends to attack by skipping the first level of the midfield, dropping the pass back, and then running off the ball. Arrieta was utterly useless as the first step in the attack. Miazga and Perinelle bullied him off the ball or outright intercepted. Without being able to drop the ball back, D.C. could not string any attacks together. It was glorious!

On the wing, newcomer Kemar Lawrence showed he is not your average backup. The 22 year-old Jamaican international was a revelation for those who had not seen his preseason performances. He was strong in his challenges, and very few D.C. attacks came down his side. He forced Nick DeLeon to cut inside and take his chances with the center backs as a result. While going forward, I would have like to see some smarter play from Lawrence, overall he acclimated quickly to the team, and brought a different dimension to the left side normally martialed by the steadfast Miller. Although, the young Jamaican did a much better job getting back to cover when possession was lost, something Miller has been criticized for in the past.

Some more work to do

While there were plenty of positives, there were two important pieces that still need some work. The first is Sacha Kljestan’s role. He did very well in dictating the pace of the game, and opening up the field after some short exchanges, he needs to become a bit more dangerous in the final third. When he did attempt to open up the game a bit, it was usually to very good results, but you can still see that he is not overly comfortable with his role on the field. Not to worry though, it doesn’t look like it will take him long to get there. He continues to show his value and is playing higher up the field than he is used to, so expect some growing pains. All in all though, it is a promising start to his tenure.
The other area of concern is the Bulls ability to kill off the game. While they created a lot of chances in the second half, they were not sharp enough around the net. About half of the Red Bulls shots were off target, something that must be improved. Finishing chances will also need to improve, case and point, Sam easily could have had another goal at the death, but his shot was directly at Bill Hamid as Lloyd attempted to power it past him rather than chip the onrushing keeper. On the defensive side, the Red Bulls sat back a bit after the second goal and invited a lot of pressure on themselves. In general, D.C. controlled possession for most of the second half and the Red Bulls were happy to absorb the pressure and counter. While it worked for them on this day, I worry about what that will mean against teams who can finish their chances.
Next week’s game against Columbus will be a much steeper test, although some regulars will be missing with international call-ups which may work in favor of New York. For now though, the celebration can continue for the well-deserved first victory.

– The Red Bulls have not had a victory this early in the season since 2011. The previous three season it took the Red Bulls 7 (2014), 5 (2013), and 3 (2012) games to find their first win.
– Damien Parrinelle had double the number of passes he had against KC and completed 88%.
– The backline had a combined 0 tackles won. Normally that would be a red flag, but it is really just a sign that D.C. could not get much penetration.
– Damien Parrinelle, 0 Fouls conceded, 1 Yellow card. LOL.
– Dax McCarty had 79 pass attempts in the game, 20 more than the next closest Red Bull players (Sacha Kljestan 59, Felipe 58), and for the second week in a row leads Red Bull Midfielders in pass completion.
– Felipe didn’t just do a great job breaking up attacks and transitioning, he also forced D.C. to foul him 5 times during the game, the most of any field player for either team.