Welcome back to Top Shelf Prospects, the daily column that brings you the next crop of professional hockey players. Each day I will bring you a new player profile or topical article in the lead-up to the 2013 NHL Draft. Be sure to bookmark the site, follow me on Twitter, and spread the word for the site that will bring you analytical and critical draft profiles and scouting reports! Last Word On Sports is your new headquarters for everything “NHL Draft”! For a Complete Listing of all our 2013 Draft Articles Click here.

Instead of our normal draft profiles today, I begin the first round of my NHL Mock Draft.  Today I bring you picks 1-15.  We’ll finish the first round tomorrow, do a few more profiles, and then bring you round two.

Some things to keep in mind:

1) Colorado Avalanche: Seth Jones, D
The Avalanche take the young American blue liner who began playing hockey in Denver, and who is well known to Executive Vice-President Joe Sakic. Jones has size, skill, and has been fighting for position in the top 3 all season long. The Avalanche take a Defenceman to add to their stable of forwards that includes Matt Duchene, Gabriel Landeskog, and Ryan O’Reilly.

2) Florida Panthers: Nathan MacKinnon, C
The Panthers are pleased to see MacKinnon fall to number 2.  They will love to put him beside Jonathan Huberdeau and recreate the chemistry of last fall’s Subway Super Series.  The two QMJHL produced prospects will create a dynamic duo in Florida for years to come.  MacKinnon comes at the perfect time for the Panthers who have number 1 centre Stephen Weiss as a UFA this summer.

3) Tampa Bay Lightning: Jonathan Drouin, LW
I see a lot of Martin St. Louis in Drouin’s game, and what better place for him to go than Tampa where he can learn directly from this season’s Art Ross Trophy winner.  St. Louis is still playing great hockey, but he isn’t getting any younger.  Eventually Drouin will replace Marty as the set up man for Steven Stamkos, ensuring that Tampa’s first line will remain dynamic for years to come.

4) Nashville Predators: Aleksander Barkov, C/LW
The Nashville Predators have never really had a franchise centre.  Sure ,Peter Forsberg filled the role for a few months, and Jason Arnott for a few years.  David Legwand played the role out of necessity, and while a good player never fulfilled the greatness that was hoped when he was drafted.  The Preds have been seeking that dynamic force up the middle throughout their existence.  In Barkov, they hope to finally find a player who can grow into the role of true game changer down the middle.

5) Carolina Hurricanes: Valeri Nichushkin, RW/LW
The Canes have the Staal brothers, Alex Semin, and Jeff Skinner under wraps.  Ideally the team would rather add a defenceman with this pick, however Nichushkin is just too good to pass up at this spot.  The Russian can play with skill and with power.  He has eased concerns on the KHL factor by getting out of his contract and claims to want to be in the NHL next season,  the Hurricanes will be the team to give him that opportunity.

6) Calgary Flames: Elias Lindholm, C
The Flames spent years looking for a franchise centre to play with Jarome Iginla.  Craig Conroy did the job for a while, and was likely the best of the long list of players they tried, but he was never a true franchise player.  Now with Iginla gone, they do get their future franchise centre in the young Swede, Lindholm.  Thankfully though, Lindholm will have some veteran wingers to help him when he makes the team, either this year or 2014, and it will be hoped that he can combine with Sven Baertschi to create a true number one line.

7) Edmonton Oilers: Darnell Nurse, D
The Oilers have a ton of good young forwards on their team in Nail Yakupov, Jordan Eberle, Taylor Hall, Ryan Nugent-Hopkins, and all the rest. They have been drafting at the top of the draft and taking offensive prospects for years. They also have Justin Schultz on Defence, with a number of young offensive defencemen developing in the AHL, Juniors, and Europe. However they don’t have a real defensive presence, and Nurse is the type of player their system lacks. The guy who can take care of his own end of the rink and be a strong physical presence, and forms a perfect pair with Schultz, who will be free to go on the attack.

8) Buffalo Sabres: Ryan Pulock, D
With Cody Hodgson, Mikhail Grigorenko, and Zemgus Girgensons all added to the Sabres in 2012, the centre position changed from one where they were really lacking young players and prospects to one where they have great depth.  Monahan certainly intrigues the Sabres here, but the need is for a future powerplay quarterback and number one defender.  Pulock can provide that if he develops, and the Sabres take the defender from Brandon.   Pulock is a hard one to judge as not many are as high on him as I am, but I think this would be a great pick, and think that he has far more offence than the stat sheet shows due to the poor group of forwards he played with and some injury issues this year.

9) New Jersey Devils: Sean Monahan, C
The Devils are extremely pleased to see Monahan still on the board.  He’s a big centre, who can score, is great on faceoffs, has character, and is excellent defensively.  No available player screams Devils hockey the way Monahan does.  He will fit seemlessly into the Devils family, and will be drinking Uncle Lou’s Kool-aid before he leaves the Prudential Centre on draft day.  Monahan will give the Devils the Centre they will need to match against their new Atlantic Division foes (or whatever we call that division) and their best players in the future years.  In a division that will feature Crosby, Malkin, Ovechkin, the Staals, Giroux, Tavares, and others, his ability to matchup against them and provide 1st line offence, will be a huge benefit if he develops.

10) Dallas Stars: Rasmus Ristolainen, D
The Stars have new GM Jim Nill running their draft for the first time.  Nill was a long time scout in the Detroit Organization and knows the importance of building a strong blueline.  When the best player available is a huge Finnish Born defenceman who plays with a mean streak, Nill knows he’s the piece to complement a prospect core that includes a puck movers like Joe Morrow.  In Ristolainen and Jamie Oleksiak the stars will have twin towers on their defence.

11) Philadelphia Flyers: Nikita Zadorov, D
The Flyers were hoping that one of Nurse, Ristolainen or Pulock would fall to them, but it is not to be.  The team is really in desperate need of a prospect defenceman, and so they take the next best one on the board, getting Nikita Zadorov, a Russian who played for the London Knights.  Zadorov has all the skills to be an elite defenceman and it will now be up to Philly to develop him into the elite defenceman he can be.  Coming from London, and the tutelage of the Hunters, he’ll have the type of mean streak that the Broad Street faithful will love.

12) Phoenix Coyotes: Hunter Shinkaruk, LW
The Coyotes have built an impressive stable of young defenceman both on the team and in the system.  However they could use some more offensive punch, and as such they go for the talented and shifty Shinkaruk out of Medicine Hat.  Equally adept as a setup man, or a sniper, the Coyotes will hope to develop Shinkaruk into a dynamic offensive force for the desert dogs. 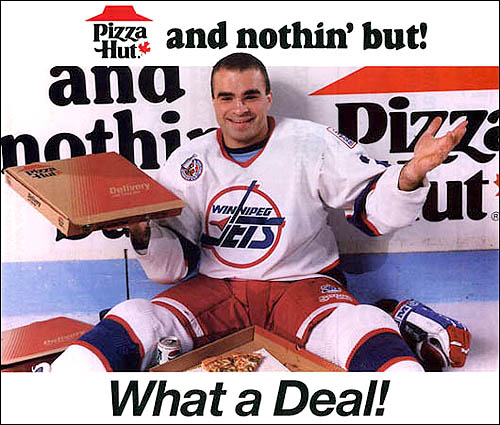 13) Winnipeg Jets: Max Domi, C
In Jacob Trouba, and Mark Scheifele the Jets have a pair of top notch prospects.  However they really don’t have a 3rd player who really jumps out at you as a future top line scorer, or top pairing defender in their prospect system.  There is young talent on the team in guys like Evander Kane up front, and in a number of names on the blue line.  As such adding another forward becomes the priority here.  The Jets take Max Domi, and local Pizza Huts begin calling to get him in ad spots, just like the old man.  Unlike the old man though, Max Domi is a dynamic offensive force who lead the OHL Champion London Knights in scoring this season.

14) Columbus Blue Jackets: Anthony Mantha, RW
The Blue Jackets rode the hot goaltending of Sergei Bobrovsky and nearly made the playoffs this season, falling just short on the final day.  Outgoing GM Scott Howson has left incoming GM Jarmo Kekalainen with a bevy of riches in this years draft as the Jackets have three first round picks.  With all the picks, the Jackets have the luxury of taking the some risks, and can go best player available and for some boom or bust prospects.  They take a boom or bust player at 14 grabbing a player with great size, good speed, and an excellent wrist shot in Anthony Mantha.  He scored 50 goals in the QMJHL this season, but his intensity has been questioned by some of my contemporaries.  It says here that the Blue Jackets get a heck of pick at 14, and a future top 6 winger with great size who will score goals for them.

15) New York Islanders: Adam Erne, RW
In what may be an NHL first, the Islanders selected nothing but defencemen in the 2012 draft, greatly boosting their prospect depth on the blue line.  At Centre they have one of the NHL’s best (and a player who is still very young) in John Tavares.  They also have Ryan Strome, and Brock Nelson in the system at Centre, and will need some wingers to play with these great prospects.  The Isles are thrilled to see a power forward prospect winger on the board in Adam Erne, and take him out of the QMJHL

You can now click here for Part 2 of the NHL Mock Draft.

For a listing of NHL Mock drafts around the internet, please check out our friends at the NHL mock database.

Thanks for reading, as always feel free to leave comments below and follow me on twitter @lastwordBKerr. Give the rest of the hockey department a follow while you’re at it – @BigMick99, @IswearGAA, and @LastWordOnNHL, and follow the site @lastwordonsport.

Interested in writing for LastWordOnSports? If so, check out our “Join Our Team” page to find out how.