Welcome to today’s edition of “Top Shelf Prospects”. If you missed any of my previous articles you can find a complete listing of them here.

Today I finish my early look at the 2013 NHL draft with the honorable mentions to my top 30 rankings.  The next group of players who are just knocking on the door for a first round ranking.  They are listed in alphabetical order, not by ranking.

If someone obvious is missing off the list (especially a European player) chances are i haven’t seen enough to properly rank him yet. I often use the World Juniors, the Five Nations, and the Under 18s as my reference point for ranking some of these players as Euro tapes are hard to come by. That said guys like Barkov, Nikushkin, and Lindholm who were seen last season (or in 4 nations events, or the Subway Super Series) will be included.

Without further ado, the honorable mentions…

Chris Bigras, Defence, Owen Sound Attack (6’0, 174 lbs):  Has been a key spark to the Owen Sound Attack offence this season with 1 goal and 17 assists for 18 points in 27 games.  He is an extremely smart player with outstanding instincts and positioning.  Bigras is extremely poised with the puck and makes hard, crisp tape to tape passes, both on the breakout and on the powerplay.  He is defensively solid, using his  strong positioning and good instincts to their full advantage.  Skating wise, he has good pivots, edgework, and balance, but could stand to work on his top end speed.  He also needs work on his shot from the point going forward.   Still a very good, steady 2 way defender.  One of those well rounded players who can be used in every situation that every team would love to have.

Oliver Bjorkstrand, Right Wing, Portland Winterhawks (5’10, 164 lbs): Portland’s first round selection in the 2012 CHL import draft, this young and talented Dane has come in and made an immediate impression for the first place Winterhawks with 13 goals and 23 points in 25 games. He has a very heavy wrist shot and an excellent release which he uses to snipe goals coming down the wing on a rush, or setting up at the top of the circles or in the slot in the offensive zone. A tad undersized, Bjorkstrand is a quick skater, and is very shifty avoiding hits from defenders. He has outstanding stickhandling and is tough to knock off the puck and his agility and quickness allow him to elude defenders and buy time to make plays for teammates. A player who could easily find his way into the first round with a productive WHL playoff run (and in Portland he is playing on a team that is a favorite to go deep in those playoffs). He definitely needs to bulk up though, and that might take some time before he’s ready for pro hockey.

Eric Comrie, Goalie, Tri-City Americans (6’1″ 170lbs): The son of “The Brick” founder Bill Comrie, and the brother of NHLer Mike Comrie (aka Mr. Hillary Duff), Eric Comrie looks to keep the famous Canadian last name in the news.  After seeing Comrie play 31 games last season Tri-City traded incumbent starter Ty Rimmer handing the number 1 job to Comrie this season.  He’s taken the bull by the horns, and has a 15-10-2 record with 2 shutouts, a .915 save percentage, and a 2.55 goals against average this season.  Comrie has decent size and good technique as a hybrid goalie.  He has very good lateral movement and his quick legs do a great job of taking away the bottom of the net, while a good glove works to take away the top portions.  Comrie plays an agressive style and comes out far to cut down angles and take away net from shooters.  He was part of Team Canada’s Gold Medal winning squad at the Ivan Hlinka Tournament splitting time with Zachary Fucale in the net.

Alex Forsberg, Centre, Prince George Cougars (5’11, 184 lbs): Sharing a famous surname, Forsberg is not related to either Peter or even Filip Forsberg.  In fact, he’s not even Swedish, as he was born in Saskatchewan.  Still Alex Forsberg was the 1st overall pick in the 2011 WHL Draft.  Since that time he’s been a bit disappointing, as he hasn’t really taken the next step in the WHL.  I had him as a possible 1st rounder before the start of the campaign, but Forsberg is falling down the boards with his 15 points in 25 games and -18 so far this season.  Granted he’s in a tough role playing on a weak Prince George squad, but even then, he just leaves you wanting more.  Consistency is a huge factor, and if he can find it, Forsberg has the skill to move up quickly.  At his best, Forsberg, is a smart centre with high hockey IQ who makes the smart play in the offensive zone. He is extremely talented with the puck on his stick and has a wide array of nifty moves and dangles to help him beat opponents one on one.  He also has excellent vision and the ability to thread the puck through the eye of a needle.  An all around offensive force, Forsberg also has a hard wrist shot and quick release.  He does need some work on his defensive game.

Ryan Graves, Defence, PEI Rocket (6’4″ 225lbs): Blessed with tremendous size, Graves is a strong defensive defenceman. He is very mobile, and uses decent speed, good edgework and strong pivots to get himself into good positions to block shots, and cut down passing lanes in the defensive zone. He’s also been willing to fight when necessary and has done well in this department the past two years. In order to break into the first round, I would like to see a bit more of a mean streak along the boards and a few more big hits. It would also be nice to see him show some more offence. He is a good passer in his own end, and starts the rush well.  While the offence is better this season with 8 assists in 27 games (as compared to 9 points in 62 games last year), he still isn’t showing much of a two way game going forward.  However given his size and defensive prowess he’s a good bet in the 2nd round right now.

Robert Hagg, Defence, Modo (6’2″ 201lbs):  Hagg is one of the players I found toughest to actually rank at this point.  Hagg was part of Sweden’s team at the U18 World Championships last spring, and in the Ivan Hlinka tournament this summer.  I have seen a bit of him in those tournaments, but would like a longer look before giving him a ranking.  He has a chance to make Sweden’s WJC squad this month, so I’ll be hoping to see more there.  From what I have seen, Hagg is an excellent skater who loves to join the rush.  He can score off the rush or on the powerplay with a hard accurate shot.  Hagg makes good crisp passes out of his own end of the rink and with the man advantage.  He has shown to be able to use his size to make him an imposing defender on the blue line.  He’s certainly someone who could rise into the first round (and quite high) of my rankings once I have more viewings of him.

Stephen Harper, Left Wing, Erie Otters (6’1 194 lbs):  Harper has excellent size and skating ability. He is extremely solid on his skates and very difficult to knock off the puck.  He controls the puck well down low, and is great at working the cycle game.  He also shows good passing ability.  A goal scorer with a quick one timer, he’s been a bit disappointing with only 7 goals in 27 games after leading the Otters with 24 goals as a 16 year old.  Haper can climb back into the first round by providing some secondary scoring for an Erie Otters team that is desperate for anyone other than Connor McDavid and Connor Brown to hit the scoresheet up front. 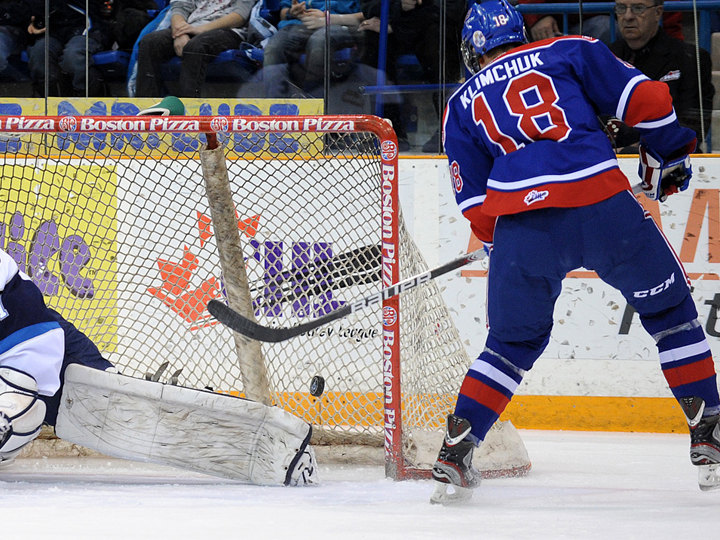 Morgan Klimchuk,  Centre/Wing, Regina Pats (5’11” 180 lbs):  Klimchuk has had an outstanding start to the season for Regina, with 16 goals and 36 points in 29 games.  He is a natural sniper, gifted with a great wrist shot and an excellent one timer. His outstanding release fools and confuses goaltenders as he seems to have the puck in the back of the net before they know it. Klimchuk has good hockey sense and is able to find openings in the defence where he can set up his deadly shot. More than just a one trick pony though, Klimchuk works hard in the corners, often winning board battles despite the fact he is merely average size. He also does extremely well in the cycle game protecting the puck with his soft hands and excellent balance on his skates.  He is really pushing hard, and very nearly made the first round of these rankings.

Nick Sorensen, RW, Quebec Remparts (6’1″ 175 lbs):  The highly touted Dane was plagued with injuries as a rookie last season only playing in 8 games for the Remparts, but he made a statement by scoring 5 goals and 9 points in those 8 games. This season he’s played 22 games and has 9 goals and 24 points in that time.  He’s proving that he is well recovered from the MCL/ACL reconstruction he had last season.  Sorensen is regaining his quick and shifty skating, and excellent agility which allows him to avoid defenders.  He’s also showing a great wrist shot and a lightning quick release. He is extremely skilled and the more he plays and continues to score, the more he’ll rise up draft charts. 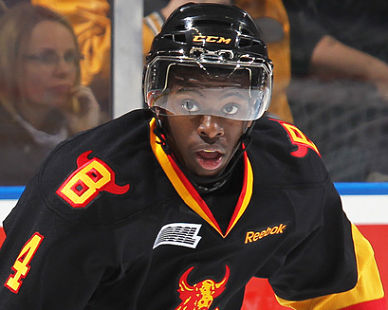 Jordan Subban, Defence, Belleville Bulls (5’10 177 lbs):  The third member of the Subban family, Jordan is a great skater, and is becoming a dangerous offensive weapon, with many of the same tools his brother P.K. showed while in Belleville. Jordan has put up 5 goals and 19 points in 28 games fro the Bulls this season. He has an excellent slapshot, and is great at one-timers. He also has great vision, and is quickly becoming the Bulls powerplay quarterback. Questions about his size will always plague him as he is listed at 5’10″ but can sometimes look even smaller than that out there.  However if he can add strength, and answer questions about his defensive ability he can move up draft boards very quickly.  Jordan certainly has the type of prodigious talent we’ve seen in his two older brothers.

Thanks for reading. Feel free to leave comments below and follow me on twitter @lastwordBKerr and be sure to join Max Vasilyev and I on Wednesday Nights at 10:00pm when we host the hockey radio show, “Puckheads”, on the Last Word Radio Network.  You can listen in live or to our past podcasts by clicking here, or by searching for us on iTunes.

Things We Learned In College, Championship Week
My Pint's Half Empty: The Arsene Wenger Conundrum