Welcome to today’s edition of “Top Shelf Prospects”. I’ve taken a couple of weeks off from the Prospect Beat since completing a review of the prospects of all thirty NHL teams. If you missed those you can find a complete listing of my previous articles here. You can also find my extensive NHL Draft preview here.

This past weekend, hockey started across the CHL, and now that the new hockey season is upon us I will be given my thoughts on this coming season. I’ll be breaking it down league by league, and conference by conference. We started Sunday with the OHL and now move on to the QMJHL Maritime Division, home of the two time defending QMJHL Champions, and a kid from Cole Harbour, Nova Scotia who looks to be the 1st Overall Pick in this year’s NHL Draft. 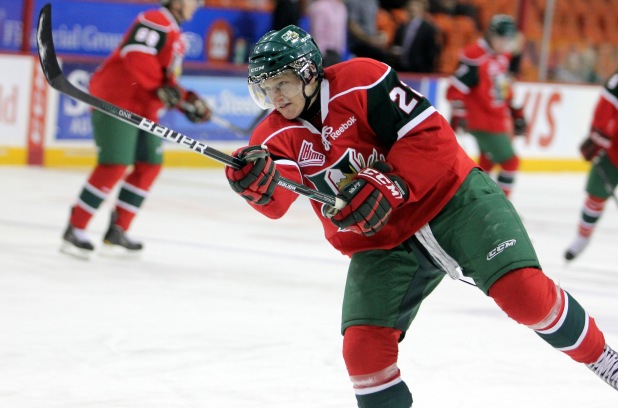 Halifax Mooseheads:  The Mooseheads are my pick to take the Maritime Division Crown and challenge for the QMJHL title.  Halifax gained valuable experience in last year’s playoffs knocking off Mikhail Grigorenko, Patrick Roy, and the Quebec Remparts in 7 games.  They would fall in the third round to the Rimouski Oceanic after 6 hard fought games but the team served notice that they were building something special.  The Mooseheads are full of young talent and of course feature the latest Cole Harbour, Nova Scotia wonderkid, Nathan MacKinnon.  He is joined by goalie Zach Fucale, and Winger Jonathan Drouin as 2013 Draft Eligible Prospects.  The Mooseheads also boast Red Wing 2nd round pick Martin Frk.  Clearly they will be capable of scoring goals again this year. The only question mark on this club is if the defensive core is good enough.

Moncton Wildcats: The Wildcats will once again be led up front by Alex and Allain Saulnier. The Wildcats have found some help for the brothers though, adding Yannick Veilleux in a trade with Shawinigan and Ivan Barbashev at 1st overall in the CHL Import Draft. On defence look for James Melindy to lead the club. Jonathan Racine was also acquired from the Cataractes to strengthen the backend. In goal Alex Dubeau also comes over from Shawinigan. With the additions of key talent with playoff experience, and the players already in Moncton, look for them to provide the biggest challenge for the Mooseheads in the Maritime division this year. 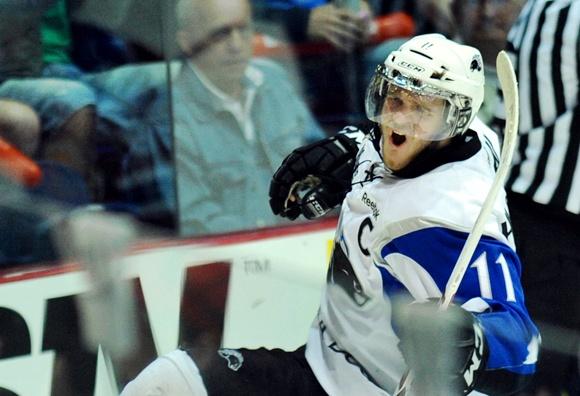 Jonathan Huberdeau, Centre /  Left Wing, Saint John Sea Dogs: As a Memorial Cup Champion, a two-time QMJHL Champion, a Memorial Cup MVP, a QMJHL playoff MVP, and a QMJHL regular season MVP, Huberdeau has done it all in the QMJHL. Expected to challenge for a spot on the Florida Panthers this year, the NHL lockout has forced Huberdeau to return to Saint John. Huberdeau will obviously dominate the league again, we’ve seen him do it before, and there is no reason to believe anything has changed on a personal level. However, the Sea Dogs are a rebuilding club and he just isn’t surrounded with the same level of talent he has been the last two years. Lets face it, the Sea Dogs will not be three-peating as QMJHL Champions. I think that if the NHL lockout continues through Christmas, we may see the Sea Dogs trade Huberdeau prior to the QMJHL trade deadline. He’d be a huge boost to any team contending for the league, and the assets the Sea Dogs would get back would accelerate their rebuild dramatically.

Zach O’Brien, Acadie-Bathurst Titan: O’Brien put up 101 points, good for 2nd in QMJHL scoring last season. His 50 goals led the league. He’s obviously an early contender to win the scoring crown this season. He has fantastic hockey sense and a great shot and release. O’Brien was considered too small, and not a good enough skater to be drafted by an NHL team, but if he puts up another big season, surely you’d have to think that someone will give him a 2 way NHL contract and a chance to prove himself at the AHL level.

Nathan MacKinnon, Centre, Halifax Mooseheads: We’ve been hearing about MacKinnon for over 2 years now. The talented playmaker has even drawn comparisons to Sidney Crosby based on his Nova Scotia roots. While I don’t think MacKinnon is quite in that class of generational player, he may be the next best thing. Blessed with extremely good skating skills, a fantastic wrist shot and release, and exceptional vision and passing ability he has all the skills necessary to be an offensive force in the NHL. MacKinnon is also willing to battle along the boards and is not afraid to get his nose dirty to make a play. MacKinnon began his draft year in style leading Canada to a Gold Medal at the Ivan Hlinka tournament, scoring a Hat Trick in the Gold Medal Game. The sky is the limit for what he can achieve in the QMJHL this season. 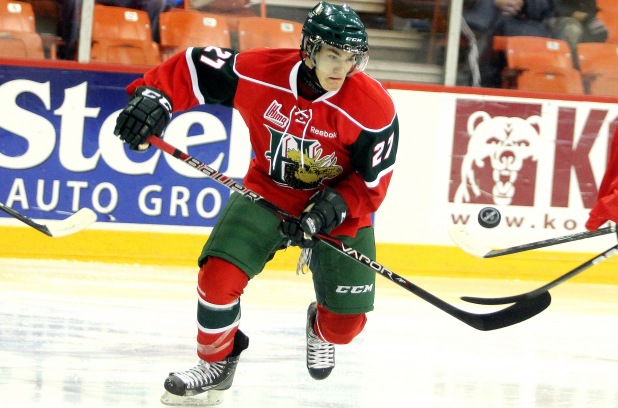 Jonathan Drouin, Left Wing, Halifax Mooseheads: MacKinnon’s teammate and linemate is playing in the shadow of the big dog, but he is no slouch when it comes to 2013 Draft Eligible Prospects. Drouin is a smooth skater, and can play the role of sniper or playmaker from the left side. He certainly deserves the praise and is a potential first round pick. He will need to add some bulk to his frame moving forward though, as he is a little thin right now.  He could also stand to work on his defensive game.  These are minor concerns though, Drouin and MacKinnon usually light up the scoreboard and are a dynamic duo for the Mooseheads.

Zachary Fucale, Goalie, Halifax Mooseheads: Three top prospects all in Halifax? This is the value of some good trades and good drafting at the 2011 QMJHL draft (along with suffering through a pretty rough season in 2010-11). The Mooseheads number 1 goalie looks to be the first goalie drafted in the 2013 NHL entry draft. He has very quick reflexes and has shown good technique.  Fucale’s rebound control is impeccable for a 16 year old goalie, it is very rare to see a kid who is already as good at that aspect as he is.  Fucale filled in admirably as the Mooseheads backup when regular starter, Anthony Terenzio, went down to injury early last season. He took the reigns, and never relenquished them, looking great in the process, starting a ridiculous number of games in a row, and even all 17 Moosehead Playoff Games as a 16 year old, with Terenzio healthy and watching from the bench.

Ryan Graves, Defence, PEI : Graves is a strong defensive defenceman with good size. He is a mobile, and a solid skater and gets himself into good positions to cut down passing lanes and to block shots. He plays a steady game and makes a good first pass out of his own zone. He’s also been willing to fight when necessary and did well for a 16 year old. NHL teams will be hoping to see a bit more of a mean streak along the boards and a few more big hits. They also would like to see him show some offence. However given his size and defensive prowess he’s already sneaking into the 2nd round as is. 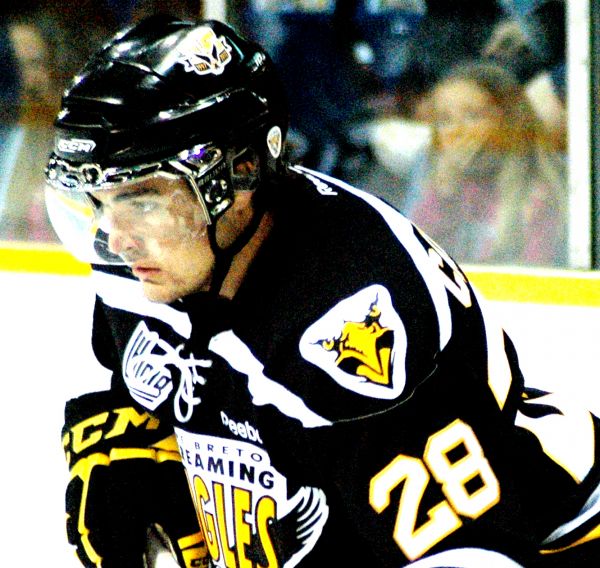 William Carrier, Centre, Cape Breton Screaming Eagles: Was his team’s 2nd leading scorer as a 16 year old. He mostly played left wing last year, but is expected to transition back to his natural position of Centre this season. Carrier is extremely solid on his skates and has great balance. He plays at his best cycling the puck down low and uses a strong, powerful stride to cut to the net when he gets an opening. Carrier has good vision and is also a very good playmaker. He has already shown the ability to play a two way game as well, and will be the main piece that Cape Breton will build their roster around.

Ivan Barbashev; Left Wing, Moncton Wildcats: The first overall pick at the CHL Import Draft, Barbashev is said to be a solid two way player, who can score goals off the wing and shows a lot of skill. He is said to be a sniper who will add offence to the Wildcats lineup. I’ll be looking for an opportunity to see the kid play as soon as possible.

Alexis Pepin, Centre, PEI : Pepin was the 2nd overall pick in the spring QMJHL Draft. Pepin is already 6’2 at 16 years of age and looks to fill out to become a power forward in PEI. Capable of playing both Center and Left Wing, he is said to be a quick agile skater, with a very good shot. Another player I’ll be keeping an eye on this season.