The NFL season kicked off last night with a classic at Lambeau Field in Green Bay. The contest pitted two strong, balanced teams and two elite pivots – Rodgers vs. Brees.

If you watched the broadcast last night, you will no doubt agree that the Americans certainly know how to wave their flags, and that’s a lesson we can all learn from.

To begin, recording artist Kid Rock performed in front of many thousands of fans screaming while waving little American flags. While I could give a flying crap about Kid Rock, it was a good show.

And then to start the game, the crowd at Lambeau was transformed into a giant waving flag…are you picking up on the night’s theme? Really, it was spectacular.

And just prior to kickoff, singer Jordin Sparks sang the national anthem. She did well. I’m still not a fan, but she was great.

The whole time I was comparing the way Americans seem to wave their flags every chance they get, while we don’t seem to have the same enthusiasm.

Are other countries passionate about where they come from? Of course! We all bleed red in Canada (I do see the irony that blood is red)… but we don’t seem to want to jump up and down and wave our flags in the same way.

So what is right? Are the Americans waving their flags at events like last night’s game because they love their country, or because it has become part of their culture? I think a little of both.

I believe that the passion is the same, whether American, Canadian or other. But the way we demonstrate it is not. Own the Podium, our Olympic campaign for the Vancouver games, took a step forward, but our American friends have a gigantic head start.

That is the last word. 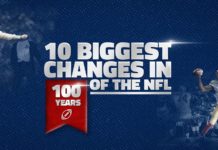