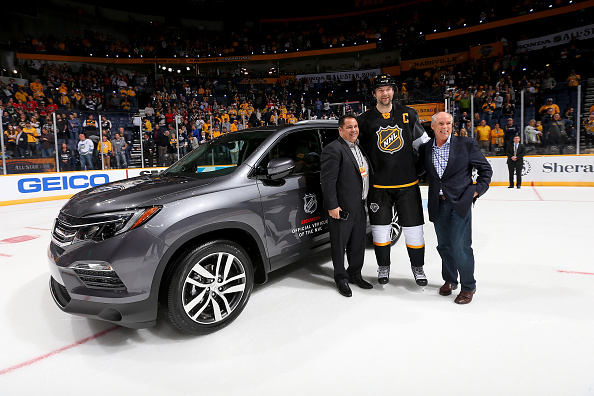 This is the fourth and final installment of Last Word on Hockey's five-part series breaking down hockey's top 50 personalities. READ MORE

LWOS is pleased to present our new hockey podcast, the 4th Line. Coming from Calgary, AB and Nanaimo, BC, Carl and Joel provide their own unique and fun view of hockey. Every week the guys share their thoughts on the news of the week, have a variety of guests from the world of hockey and […] READ MORE

The NHL isn't known to be a tall man's game, but here are how some players are take advantage of their size playing against guys almost half their height. READ MORE

The NHL All-Star Weekend was on it's final breath but the league, the city of Nashville, and players who just want to have fun gave it a new life. READ MORE

There is no hockey fan out there who would ever expect to hear the words “John Scott” and “MVP” in the same sentence. But after a chaotic month of voting, trades and reassignments, along with a hell of a weekend, that has all changed. For Scott and the entire National Hockey League, the 2016 All-Star weekend will go down in […] READ MORE

It is time that the NHL takes a hard look at the All-Star Game and finds a way to bottle up the successful and enjoyable 2016 edition of the game in Nashville. Let’s face it, one of the people who made this game more enjoyable than the usual lackluster All-Star events was none other than John […] READ MORE

We sit down with Josh Cooper (@JoshuaCooper), an editor with Yahoo's Puck Daddy Hockey Blog to talk about this year's NHL All-Star Game in Nashville. READ MORE

Last Word on Sports is proud to present their hockey podcast, On the Powerplay with Ben and Dave. Join Ben Kerr and Dave Gove each week as they take a look around the Hockey World focusing on the big issues of the NHL and elsewhere. On this week’s edition: After being sent down to the AHL […] READ MORE

The NHL announced on Tuesday morning that, after much speculation and doubt, it will in fact allow enforcer John Scott to captain the Pacific Division team at the 2016 All-Star Game in Nashville. Last Friday, many fans who had voted him into the game received disappointing news, as it was announced he had been traded from the Arizona Coyotes to the Montreal Canadiens, as a minor piece of a trade for Jarred Tinordi. READ MORE