With the Japan Top League quarterfinals set to commence this weekend, the growing numbers of Asian rugby fans are ready for knockout rugby.

Agreed, that is the purpose of all rugby competitions yet, reaching this stage is one step. The next is to graduate past the knockout stages – Japan Top League quarterfinals follow on from the completed qualifying stages. Now the step-up, the teams move through the gears to near top speed.

Quarterfinals are two matches away from every team’s objective, and there is a fine balance between laying all your cards down now and, having something left in the reserve tank.

That’s enough with the motoring metaphors though, let’s meet the teams that will play on Saturday May 8, and Sunday May 9 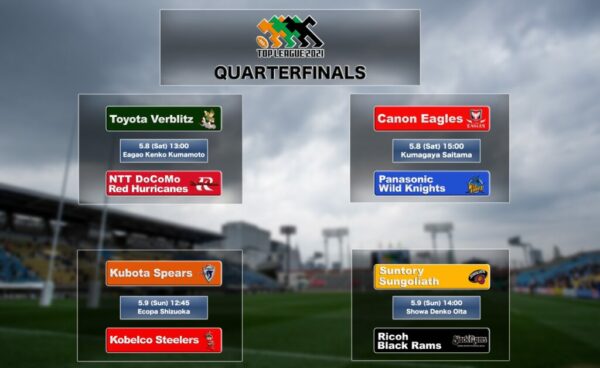 Investing heavily in their goal of repeating the three titles earned in the past century, it would bring great pride to the Aichi Prefecture side, to progress further. With the oversight of Steve Hansen, a heavy-International presense has proven a good direction in the last few seasons. Ex-Wallabies skipper Michael Hooper and Springbok Willie le Roux add to the always professional, Kieran Read.

Johan Ackermann is in his second year with the Osaka side, and to his credit the team has made great strides to bring a more rounded style to the club. Not reliant on a volume of imported talent, the local company-players have provided the backbone on which the stars, like TJ Perenara could shine.

Projection: If the ‘blitz’ can control the tempo, most see Toyota as a finalist in 2021.

This year has been one of the best for the Canon Eagles. Wins against the Ricoh Black Rams and rivals the NTT Communications Shining Arcs have been mixed with some disappointing losses. With former-Springboks coach Alistair Coetzee at the helm, the chances of progression are fair to even.

Facing them are multiple Championship winning side, the Panasonic Wild Knights. A tough opposition, as their winning habit was only halted by one drawn result to the Kobelco Steelers. That underlying confidence will provide a good cushion for high-flying Kenki Fukuoka (see below image) and his group to aim for more success.

Projection: It will take more from the Eagles to defy the Wild Knights yet another finals place [searching for their fourth title in the last decade].

With losses to top-tier sides Suntory and Verblitz, the Kubota Spears will feel they have the game to match reigning title holders, Kobe Steel. Rebounding from a lower place finish in past league seasons, the introduction of Malcolm Marx and Bernard Foley has ensured they carry forward momentum to counter the ‘champs’.

Well directed by famed mentor Wayne Smith, this year’s squad has the blend of local and imported talent that will assist the side to push for another trophy. Mixed wins of both large margins, and small tougher encounters provide a firm base for this squad to aim to overturn their opponents.

Projection: while past form counts well, Kubota Spears might well feel this season they can prevail in the Japan Top League quarterfinals.

It is hard to see a better example in 2021. Pushing aside all but one; in a close fought victory over Toyota Verblitz. It might seem that the highest ranked qualifier is aiming to run through all comers – and with the power of Hendrik Tui, the pace of Beauden Barrett, and the leadership of Yutaka Nagare, it is a fine rugby team that approaches this quarterfinal.

Finding it a tough going in many fixtures over the season, meeting the favourites now might need the Black rams to reach peak performance for 80 minutes. That is the only way they can improve on a mixed season – some excellent games, rounded by too many less satisfactory outings. On Sunday, the group must pull all their strength together.

Projection: very few will bet on the Ricoh Black Rams to upset the Sungoliath. It seems a firm bet, to count on Suntory yet again.

Following the Japan Top League quarterfinals, expect heightened interest from across the rugby globe, as semifinals and the Top League final are played out. Timed well to bring enjoyment to Asian rugby fans who have been limited in their opportunities to witness live games over the past month.

52 players and team staff have been announced for the year 2021 ahead of the Brave Blossoms v British & Irish Lions match going ahead in June.

Note: the Japanese Brave Blossom’s side has been selected, so player’s who go past the quarterfinals and beyond can then enjoy representative football, as they plan to travel to Murrayfield, Edinburgh for a rare outing for any side outside of New Zealand, Australia, and South Africa. On June 26, they will meet the British and Irish Lions side in a warm-up match.