The 2021 British and Irish Lions squad announcement is hugely exciting, with choices coming from all sectors of the game. As such, our final Last Word on Rugby squad selection looks to reinforce the status and recent player examples from the just completed Six Nations Championship.

Given the form coming out of the home nations, a rugby squad selection is possible. Captaincy, bolters and England’s failing stars are all dominating the headlines. Warren Gatland looks likely to pick on versatility and experience, meaning talent such as Sam Simmonds and possibly Luis Rees-Zammit might stay at home according to Charlie Inglefield.

While the discussion continues until May 6, Alun Wyn Jones will surely take the captaincy honours to end that discussion. Every position is debatable in fact, and there are two conundrums that are perhaps top of Warren Gatland’s list. The first is; whether Johnny Sexton or Owen Farrell will tour.

The second is considering a bolter or two to ‘complement’ the experience that Gatland has available to him.

Dan Biggar, Owen Farrell, Johnny Sexton and Finn Russell. One of them will not go. Dan Biggar must go given his form and is a likely starter for the first test. Finn Russell could be a key attacking weapon for the Lions, especially if the team needs to chase a win in the final quarter of a game. And then there is Johnny Sexton and Owen Farrell. Between them, they have won everything there is to win in the game apart from a World Cup.

Johnny Sexton would be massively unlucky to miss out but Farrell’s versatility may just sway Gatland’s mind. Farrell’s reputation will probably get him into the squad but he must regain his form to repay the management’s faith. This promises to be a close series and it may well be decided in the last ten minutes of the third test match. Who would you want to kick for goal? For our senior rugby contributor Charlie Inglefield, Farrell is probably that man.

Warren Gatland will understandably go for size, power and experience. However for the British and Irish Lions to win in South Africa they will need to score tries. No easy task given how good the Springbok defence will be off the back of their 2019 World Cup triumph. It raises the question of whether Gatland will leave a space or two open in his squad for a bolter. Two obvious names that come to mind are Sam Simmonds and Danny Care.

Warren Gatland has been to Sandy Park a couple of times which would suggest that he is more than interested in Simmonds. Simmonds offers a unique skill set that most in world rugby cannot do. He would be a huge asset to have on a test match bench.

The Lions are struggling for options at scrum-half. The Welsh trio of Gareth Davies, Tomos Williams and Rhys Webb have been injured or out of form. Conor Murray despite being excellent against England has had a tough 12 months and Ben Youngs has ruled himself out. Ali Price is a good option but can be shaky if put under pressure. Danny Care’s name should therefore be thrown into the hat. He has been outstanding this season for Harlequins and not just with his traditional running game. Care’s game management and box kicking are in excellent working order as well.

The question that every recent British and Irish Lions rugby squad selection has been unable to confirm with certainty is, whether Gatland believes he has room to accommodate a bolter [or two]?

The first of many tough selection picks begins with the back three. We have gone for James Lowe as one of our bolters for the tour. He has struggled a bit with form and injuries but Lowe has pace, power and experience of playing in South Africa. Lowe goes, just, past Josh Adams, Duhan van der Merwe and Keith Earls. Van der Merwe may well go but his defence is a worry and the Springboks will definitely target him. Jonny May like most Englishmen has struggled over the last 12 months but he is so dangerous in space and would relish the hard grounds of South Africa. One man who may take a place is Jack Nowell, who is now back from injury and can cover wing and centre.

With George North out injured, there is an argument for Manu Tuilagi to get a call-up. Particularly as Gatland favours power and understandably so given what the Springboks will throw at the Lions.

Henry Slade may be the man that takes over from North. Slade has been poorly used by England but with space to play in, he is an outstanding player. With Dan Biggar and Finn Russell at number ten, Slade could be the creative trump card for the Lions’ backline. And he has that versatility tag of playing anywhere in the backline.

This is undoubtedly one of the hardest picks Gatland faces. Johnny Sexton has every right to be in the squad. But with Dan Biggar playing really well and Finn Russell an absolute must for his creative genius, it is either Farrell or Sexton. Despite an underwhelming 18 months, Farrell is a big match player and can be played in the centres if Gatland wants two playmakers. It could be that Russell does not make it as it goes against Gatland’s favoured style of play.

Gatland will probably take three scrum-halves and Danny Care must be in contention. He qualifies on his experience with 84 England caps and is playing the best rugby of his career. Murray provides the aerial bombardment to counter the Springbok equivalent, Care can attack and lift the pace of the game. Likely to be Gareth Davies, Murray and Ali Price though.

The scrums will be so important in this series and the Lions have to get their selection right in this area. South Africa tore England to shreds in the 2019 World Cup Final and that is a warning to Warren Gatland. Joe Marler must be considered but Gatland is not Marler’s biggest fan after 2017 if rumours are to be believed. Mako Vunipola, Cian Healy and Tadhg Furlong have the experience.

Scotland’s George Turner would be very unlucky to miss this tour. However, the lineouts are key against South Africa and Turner has struggled in this area. The Lions have to pick reliable throwers and Cowan-Dickie will certainly challenge a currently off-form Jamie George and the likely starter, Ken Owens.

Courtney Lawes should be considered but his injury problems may just leave him vulnerable. Lawes is brutal in defence and his physicality would be very useful against the Springboks. Maro Itoje could well slot in at blindside giving Gatland an option of a James Ryan and Alun Wyn Jones combination. 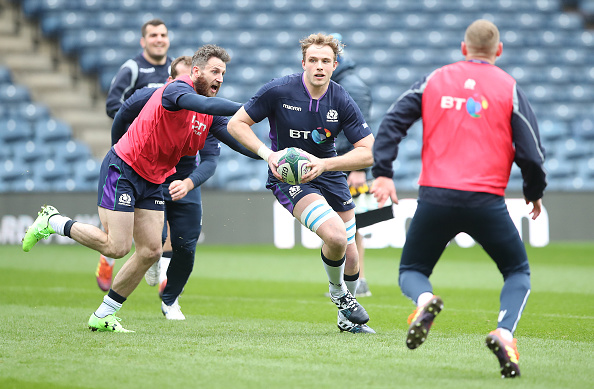 It would be extremely harsh on Iain Henderson, especially as he can play in the back row. However Jonny Gray (see above image) is the kind of player who would fit into Gatland’s thinking. He puts his head where it shouldn’t be, is excellent in the lineout and makes his tackles.

You could have so many options in the back row and nobody would let the squad down. Josh Navidi, CJ Stander, Josh van der Flier, Billy Vunipola, Ben Earl and Jamie Ritchie all have their rightful claims. Sam Underhill’s power and tackling might possibly put him in at the expense of the excellent Jamie Ritchie.  Tadhg Beirne was Ireland’s best player in the 2021 Six Nations and he that crucial ability to turn over opposition ball.

Much will depend on whether Gatland takes a punt on Courtney Lawes and Sam Simmonds.

The official British and Irish Lions rugby squad selection is announced on May 6, live from 11:45am when chairman Jason Leonard reveals the 2021 Lions squad and tour captain.

At that point, the global rugby conversation will be dominated by conjecture, agreement and arguments for and against. So join Last Word on Rugby in our LWOS boards forum site. You can create your own, add to others and discuss the side that will visit South Africa from late June.