There have been some memorable players to take the field for teams based in Greater Sydne NRL clubs, and in regional New South Wales, Victoria, the Australian Capital Territory, Queensland, and New Zealand.

Here Last Word on Rugby are looking at the best players to play for each of the two regional New South Wales clubs and the expansion sides from the Australian Capital Territory; Canberra, and Melbourne,  Victoria.

Captured outside of Sydney, yet still within the state confines, the New South Wales NRL teams are the Newcastle Knights and St George Illawarra Dragons. They each have different histories, with Newcastle emerging alongside the Industrial city, while the Dragons exist as a 1999 venture between the St George Dragons and Illawarra Steelers.

While down over the state border sits the Canberra Raiders, and the Melbourne Storm from the ACT and Victoria respectively.

All four have provided key moments in the history of the National Rugby League, and have seen players emerge who would be considered amongst the games best.

The eighth Immortal, Andrew Johns is a rugby league legend but he will be seen by Knights fans as even more, given his outstanding career there. From 1997 to 2007, Johns consistently displayed his talents at halfback that saw him score 80 tries in a record 249 games, winning the Dally M Medal three times.

A brilliant goal kicker, Johns slotted over 917 goals for Newcastle helping him to finish as the then highest points scorer in Australian first-grade premiership history with 2,176 points.

Playing in the halves alongside his brother Matthew, his crowning moment came in 1997 when he helped Newcastle win their first premiership title, setting up two tries including Darren Albert’s match clincher.

By 2001, the elder John’s brother had left but Andrew steered the club to a second premiership, keeping up their 100 percent record in Grand Finals.

He retired in 2006 due to long-standing injury problems but the following year was named in the Knight’s team of the last 20 years.

Gasnier finished his career in 1967 but is still revered to this day, being named as an Immortal after winning six premierships at the Dragons.

Playing at centre, he spent his whole career at St George scoring 127 tries in 125 games from 1959 in a period where the club won 11 consecutive titles.

His highest try-scoring season came in 1963 when he crossed 25 times and he only failed to reach double figures once. The calibre of the team he played in was highlighted by teammate Johnny Raper and Graeme Langlands joining him in 1981 and 1999 as Immortals.

In 2008 he was selected as one of Australia’s 100 Greatest Players by the National Rugby League and Australian Rugby League. 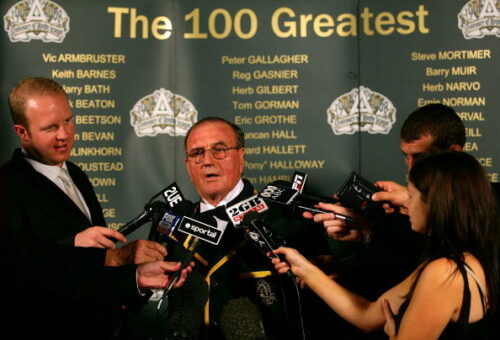 Editors note: Illawarra Steelers player Rod Wishart would be a candidate for inclusion for his club. While he only played 23 matches in the new venture, Wishart earned  154 caps and scored over 1000 points for Illawarra, before the club ended its 20 history.

Daley played during the Raiders’ most successful period, between 1897 and 2000 where they won three premierships and were runners-up twice.  Playing at centre and five-eighth, he scored 87 tries in 244 matches alongside kicking 40 goals in a career spent exclusively in the capital.

During his time, Daley’s side finished in the top-four eight times, with the five-eighth claiming the player of the year award in 1990 as Canberra won their second consecutive title.

In 2006, he was elected into Canberra’s 25-year team and two years later was inducted into the Australian Hall of Fame.

Still playing at the age of 37, Smith is regarded as one of Melbourne’s best-ever players and arguably the best dummy-half to play the game. In a career spent solely at the Storm, he has racked up over 400 matches; the only player in NRL history to achieve this feat.

His longevity has been well rewarded since his debut in 2002 with two premierships. Even while another two were taken away from the club in 2007 and 2009 after breaching the salary cap, his side has been one of the most dominated NRL clubs in modern history.

A legend of the game for his leadership and all-round play, Smith is still setting the benchmark in 2020 and has one many individual awards throughout his career including the Dally M Player of the Year and the Golden Boot twice, as well as the Dally M Hooker of the Year on seven occasions. 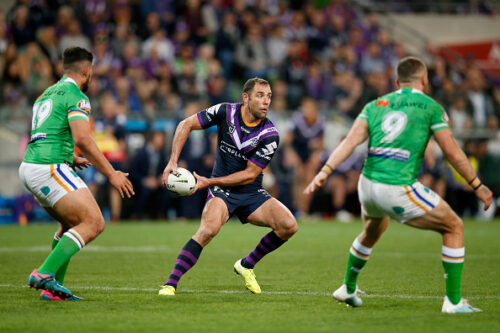 He is the highest points scorer in NRL history with 2,616 points, overtaking Hasem El Masri’s record of 2,418 last year.

Smith, who has been Melbourne captain since 2012, has been recognized for his service with a Member of the Order of Australia (AM) in 2019.

Enjoyed this? Then read our Greater Sydney NRL clubs list of players here.