There have been some memorable players to take the field from the Greater Sydney NRL clubs. Recognized names, who have established legacies both at their clubs, and in the game in general.

Here Last Word on Rugby is looking at some of the best players to play for each of the NRL’s eight Greater Sydney clubs.

After starting his career with Parramatta where he won a Grand Final in 2001, Ryan moved to the Bulldogs for the 2003 season.

He had a successful first season playing 24 games but his second season saw his breakthrough at Canterbury, scoring 13 tries; an impressive return for a second-row, as he captained them to a Grand Final win over the Roosters. 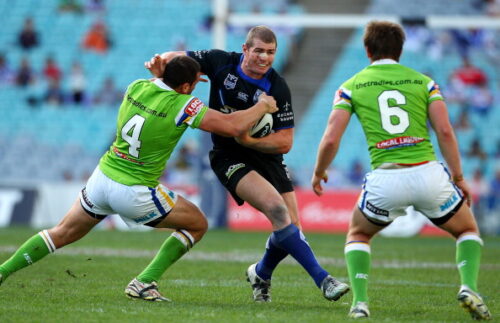 The 2004 campaign was his highest-scoring season but he was a threat throughout, crossing for 52 tries in 2018 for Canterbury. Ryan was named captain in 2005 when Steve Price left the club but it was an underwhelming year as they finished 12th.

In 2008 he saw the side claim the Wooden Spoon with five wins all season. But 2009 saw a remarkable turnaround, with Canterbury coming to within a game of the Grand Final and Ryan being named Dally M Captain of the Year.

That was the last time the Bulldogs would make the finals before the second rower’s retirement at the end of the 2011 season, as the only member left of the 2004 title-winning side.

His longevity was highlighted with his record of the most seasons played in Australian first-grade of 19, one more than Storm captain Cameron Smith. In 2014 came one of his lowest points when he was banned for three NRL matches and Australia’s Four Nations series after accepting backdated bans for using banned substances.

However, two years later was his crowning moment as Cronulla beat Melbourne 14-12 in the Grand Final to seal their first-ever premiership with the prop setting up Ben Barba for the first try.

Two years later Gallen retired with his final game coming in an elimination final defeat to Manly but not before he had been named in the Sharks half-century team in 2017.

During his career, Paul Gallen turned to boxing, becoming professional in 2014. He ended with an unbeaten record from 10 fights.

The most prolific try-scoring forward in rugby league, Menzies’ 180 tries is only behind Ken Irvine and Billy Slater.

His first few seasons were his most successful as Manly. Here they reached three successive Grand Finals from 1995, winning the second of them against St George Illawarra.  The prop remarkably finished as the club’s top try-scorer in all but two campaigns in his first spell including finishing with at least 20 tries on three occasions.

At the end of 1999, Manly-Warringah controversially merged with arch-rivals North Sydney and became the Northern Eagles with Menzies predictably to team’s top try-scorer in 2002.

After their dissolution in 2002, Menzies returned to the Sea Eagles, losing a Grand Final in 2007 to Melbourne. However the following year they thrashed the Storm 40-0 to claim their second premiership with the second-row scoring on the day he equaled Terry Lamb’s NRL clubs record of 349 first-grade games.

Sterling is seen as one of the Eels’ greatest ever players as he was part of the club’s most successful period of four premierships in six seasons. The halfback started his Parramatta career in 1978 and played 248 matches until he left in 1992.

Their Grand Final’s run started in 1981 with Sterling winning three consecutive titles added to in 1986 with 1984 seeing them finish as runners-up.

Sterling scored 40 tries for the Eels as he cemented his place as one of the league’s best halfbacks with his best scoring seasons in 1981 and 1982, with eight tries each.

His playing career saw him collect a host of individual awards including:

Following his retirement in 1992, he was awarded the Australian Sports Medal in 2000 and was inducted into the Australian Rugby League Hall of Fame in 2006.

Girdler played the majority of his career with the Panthers, racking up 204 games between 1993 and 2004.  A goal-kicking centre, he scored an outstanding 101 tries and kicked 531 goals for, at times, a struggling side who only reached the finals five times during his spell.

However, they were able to claim only their second-ever premiership in 2003, beating Sydney Roosters 18-6 in the final. This capped a remarkable turnaround for a club who had claimed the Wooden Spoon just two years earlier. 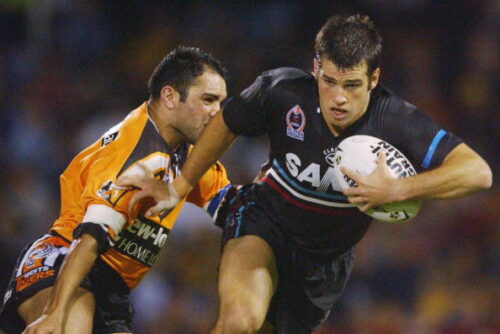 His best try-scoring season came in 1999 when he crossed 18 times as he was named Dally M Centre of the Year in a career where he became the first player to score 100 tries and kick 500 goals.

The all-time points scorer in Penrith’s history with 1,572 points including a record 28 points in 2002 against Manly, Girdler retired in 2004 after a Preliminary Final loss to Canterbury.

Despite retiring in 1961, Clive Churchill is a name synonymous with the game of rugby league as the prestigious Clive Churchill Medal for man-of-the-match in the NRL grand final bears his name.

The fullback is best remembered for his time at the all-conquering Rabbitohs where he played between 1947 and 1958 making 157 appearances. During this time he won five premierships, all coming in a six-year stretch in one the most successful periods in the club’s history. Churchill was named man-of-the-match in 1954.

The only other accolade to come during his career was when he was named as one of the initial four post-war Immortals in 1981 as one the nation’s greatest players.

A year after his passing, the Clive Churchill medal was created and has been awarded at every Grand Final since 1986. He also has a stand named after him at the Sydney Cricket Ground and in 2002 was named in South Sydney’s team of the century and inducted into the Australian Rugby League Hall of Fame.

His fourth club in rugby league, from 1971 to 1978, the Sydney Roosters was where Arthur Beetson played the majority of his career with 131 appearances.  Formerly known as Eastern Suburbs, the club took on the name Sydney Roosters in 1995.

Arthur Beetson became the first Aboriginal to captain Australia in any sport, when in 1973 he led Easts. The Roosters won consecutive premierships in 1974 and 1975 as well as finishing runners-up in 1972.

They were seen as one of the greatest NRL clubs during Beetson’s stint. In 1976 the Sydney side also won the World Club Challenge by beating St Helens with Beeston captaining the side.

As for personal honours, the prop was recognized as the Rugby League Week Player of the Year in 1974 – poignantly, in 2008 Beetson was retrospectively awarded the Clive Churchill Medal for the 1974 Grand Final.

He captained Queensland in the inaugural State of Origin match in 1980, which ushered in a new era for the game.

Following his retirement in 1982, he was voted as an Immortal in 2003 and the same year was inducted into the Australian Hall of Fame. Beetson was named in the Roosters Team of the Century of the best players from 1908 to 2000 and their Centurions team of players to have played 100 or more matches for the club.

After his debut in 2003, his first couple of seasons were restricted to just seven matches but 2005 would be a breakthrough season for both player and club. At dummy-half, Farah played 27 matches, scoring eight tries as a stunning late-season run saw Wests win their maiden premiership, beating North Queensland Cowboys.

From there Farah became a mainstay in the team, becoming one of their most important players in winning their Player of the Year in 2006. He retained his club award the following season and was also named Dally M Hooker of the Year in arguably his best campaign for the Tigers.

Following a year at South Sydney Rabbitohs, Farah returned in 2018 for a final season but could not prevent a loss to Cronulla in his final game meaning Wests missed out on a finals spot.