All Elite Wrestling kicks off the month of April with another rousing edition of AEW Dynamite. Let’s preview the action that set to unfold on Dynamite as Adam Cole battles “The Instant Classic” Christian Cage. The Owen Hart Foundation Women’s Tournament qualifiers continue, and on the Men’s side, it begins. Plus, two pay-per-view level tag team matches, including FTR versus The Young Bucks, take place this Wednesday night live on AEW Dynamite. 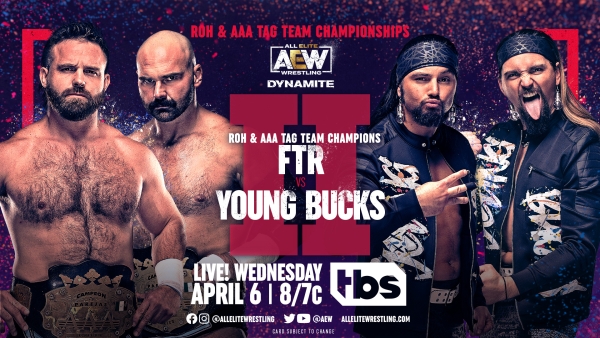 Matt and Nick Jackson crashed Supercard of Honor immediately following the championship victory of FTR. Dax Harwood and Cash Wheeler wanted to fight then and there. However, the Bucks set the terms, and on this Wednesday night’s Dynamite, these two teams rekindle their rivalry.

A win over The Young Bucks has eluded FTR for almost two years now. Dax and Cash consider a win over the tremendous brother duo to be the last step on their way to becoming the AEW World Tag Team Champions once more. That being said, Matt and Nick will not be pushovers as they look to rise up in the AEW tag team division themselves and recapture some tag team gold. This Wednesday night, on AEW Dynamite, it’s The Young Bucks versus FTR part two for the AAA Tag Team Championship! Something’s got to give this Wednesday night on TBS! 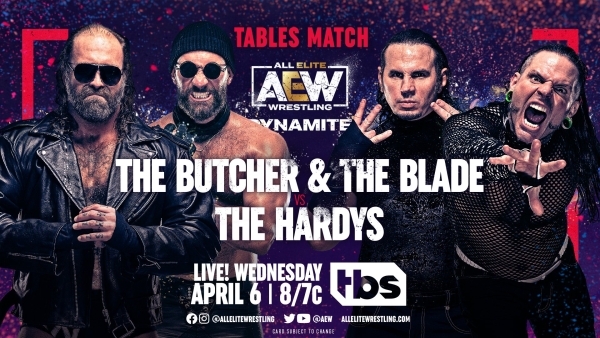 Taking it to the Xtreme

From one tremendous tag team match to another, The Butcher and The Blade look to avenge the AFO’s 8-man-tornado tag team loss as they battle The Hardys in a Tables Match. The Hardys waged war on the AFO the moment the group turned their back on their former CEO. Matt Hardy was on the receiving end of a brutal beatdown from the then AHFO. Fortunately for him, his brother Jeff Hardy, along with Darby Allin and “The Icon” Sting, came to his aid.

The war is not quite over, and in this latest edition of Dynamite, the battle is about to get more bloody. The Hardys are certainly in their element in this Tables Match. However. The Butcher and the Blade are a formidable duo that will stop at nothing to get their point across. Who’s coming out on top? Tune in this Wednesday night on AEW Dynamite so you don’t miss any of the action!