After weeks of announcements, press conferences, and sponsorship deals, it looks like Lucha Libre: AAA Worldwide is on the track of making their 30th anniversary a memorable one, and it all begins with their first pay-per-view event this year, Rey de Reyes 2022. The 25th edition of Rey de Reyes will be taking place in a baseball stadium in Veracruz, Mexico which sits around 7,500 fans for baseball games and has never been used for wrestling.

Not only will this event mark the start of the year for the Mexican promotion but it also presents a star-studded match card. It features the top championship for grabs and the former tag team champions in action. It will also showcase the annual Rey de Reyes match, a promising triple threat tag team match, and much more. 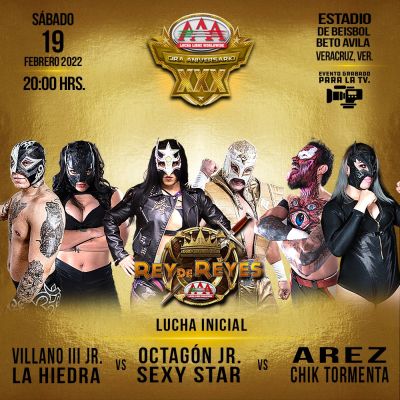 This match is currently scheduled to open Rey de Reyes 2022 this weekend and it’s not exactly difficult to figure out why. While this match may have no stakes or real star power to it, it features some of the best up-and-coming high-flying talent in AAA in the form of Arez, Villano III Jr., and Octagón Jr.

Another selling point to the match is the recent focus AAA has put on the factions as of late and this match sees representation for two of their top factions in Los Mercenarios, which AAA has struggled to keep relevant with the recent defection of Texano Jr. and Black Taurus, and the recently revived and aligned with company legend Cibernetico, Los Vipers. 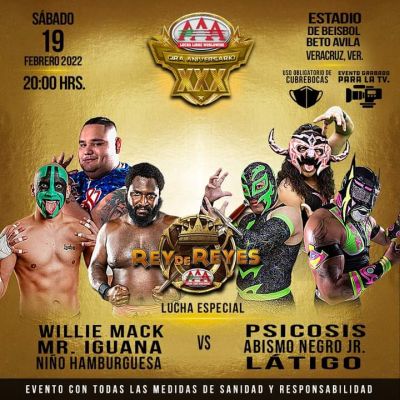 The following match in the card is another stakes-less match with the intention of heating up the crowd before the show-sellers of the night. Yet again, though, there might be more to this match than most people may see.

This particular match looks to be a showcase match for the aforementioned recently revived Vipers; the faction has teamed together in every single show and this time they face the team of fan favorites Mr. Iguana and Niño Hamburguesa alongside international superstar Willie Mack.

From experience, we know this match is going to be explosive, it’s going to be electric, and it’s going to be a great showcase for both teams as all six competitors look to establish themselves in the AAA roster. In the Vipers’ case, they’re making a legitimate case to dethrone Los Mercenarios as the World Trios Champions. 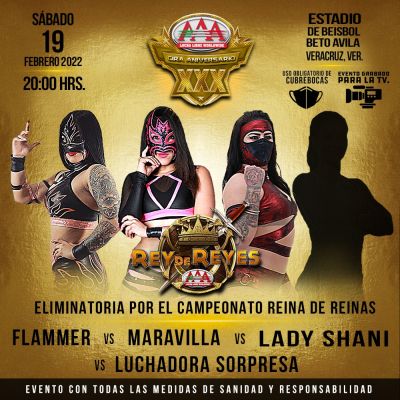 In the only all-female match of the night, AAA goes against the tradition of having the Reina de Reinas Championship defended on the event that inspired the title. Instead, three of AAA’s top female stars and a surprise entrant will battle for the right of challenging current champion Deonna Purrazzo at, presumably, the first Triplemanía of the year in April.

Regarding the match, while theoretically any of the three announced women could face Purrazzo and deliver a quality match, it feels as if the surprise entrant has a better chance at winning the match, especially considering who is slated to fill that slot.

According to rumor, Taya Valkyrie looks to be the most likely wrestler to enter the match at the last minute, winning the entire match. Valkyrie is considered one of the greatest Reina de Reinas titleholders in history in addition to one of the best available female wrestlers in the world.

We want to be perfectly clear in saying that any of the women involved have a reasonable chance of winning the match. However, considering Valkyrie has already confirmed her return to AAA, and seeing how she hasn’t faced Purrazzo ever since she lost this very championship to her in early 2021, this international cash seems like a no brainer for an upcoming Triplemanía. 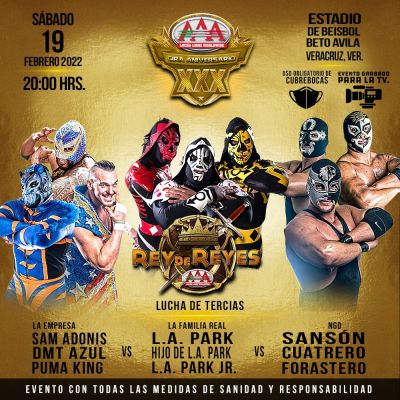 Coming up on our main events of the evening, this special attraction match has all the ingredients to not only steal the show but also have some major repercussions for all three factions in the coming year as all three look to make 2022 their breakout year.

Considering the success La Empresa and Nueva Generación Dinamita have had ever since their respective debuts last summer, and the incredible crowd reactions L.A. Park has been generating, it looks like a slam dunk on AAA’s part to put this acclaimed veteran and his sons alongside the two most promising factions in the company.

The most interesting aspect of the match looks to be who ends up taking the loss. Both NGD and La Empresa have been greatly protected and have rarely lost a match since their arrival to AAA. Adding to the mix the insanely positive reactions L.A. Park has been receiving on previous AAA live shows, this is perhaps the most unpredictable match on the card. 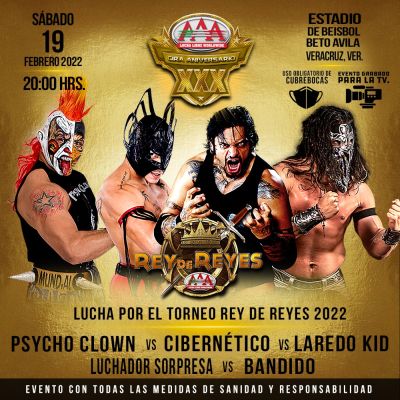 Speaking of breaking tradition, this year’s version of WWE’s King of the Ring will not feature a tournament or a battle royal as it usually does. Rather, it will begin and end with this fatal-five way that features not only AAA’s main star in Psycho Clown but also freshly returned Cibernetico, international sensations Laredo Kid and Bandido, and finally, a surprise entrant.

Yet another highly unpredictable match for AAA’s first big event of the year as, contrary to the women’s match, there isn’t really a clear-cut candidate to fill the remaining spot in the match; this adds a surprise element to this already stacked match.

While Psycho Clown may be the heavy favorite to win the match, we believe there is reason to think AAA could pull the trigger on either Cibernetico and his triumphant return story or on Laredo Kid’s first time ever repeat win, keeping in mind he won the tournament last year.

That all goes without mentioning the Pro Wrestling Guerrilla World Champion, Bandido. Considering his previous appearances for AAA, he may not look like a possible winner. However, when it comes to his in-ring ability and growing popularity, there is every reason why AAA would be interested in promoting him as the new Rey de Reyes. 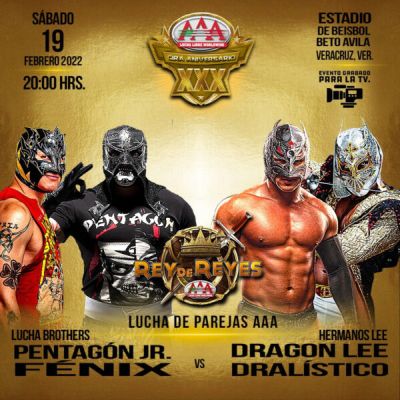 Making their second appearance as a tag team for AAA, the Lee Brothers have the chance of a lifetime to make a positive impression on the AAA audience against one of the best and most liked teams in AAA history, the Lucha Brothers.

While Fénix and Pentagón Jr.’s run in AAA has been somewhat tarnished following their feud with FTR over in All Elite Wrestling, with the Mexican brothers defeated in at least three high profile matches in the last couple of months, it is undeniable the impact the Lucha Bros have on the tag division. A victory against Dragon Lee and the newly repackaged Dralístico could very well lead them to yet another shot at Dax Harwood and Cash Wheeler’s AAA World Tag Team Championship.

The real selling point of this match is the actual in-ring work these two teams will be able to pull off. Longtime fans are very much aware of the match quality every wrestler in the match is capable of, especially in their specialty: tag team wrestling. 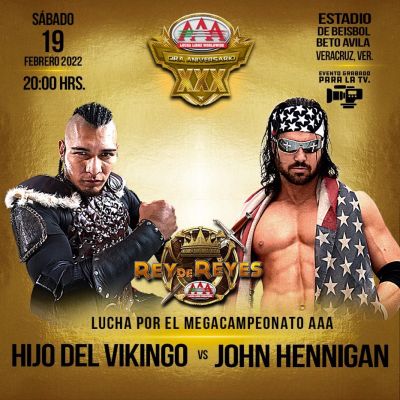 Time for the main event. And not only that, it’s time for John Hennigan’s return to Mexico and time to see what Hijo del Vikingo is made of. This match will be Vikingo’s first high-profile defense of his AAA Mega Championship which he won back in December, in a multi-person match. While it was entertaining, and a worthy coronation for the young superstar, it didn’t allow Vikingo to have a triumphant, convincing victory to start his reign.

Hennigan is a familiar face to AAA fans; he had a Mega Championship run not too long ago which ended at the same time he left the company. This may mean the former Johnny Mundo is thirsty for revenge and a second run on top in Mexico. This is exactly what makes this match special, the story being indirectly told by both wrestlers as they are both going through different paths and different stages of their respective paths yet they are brought together.

The young lion looks to convince his deniers that he is worthy of the top championship against the veteran foreigner wanting to conquer Mexico for a second time.

Stay tuned to the Last Word on Pro Wrestling for more on this and other stories from around the world of wrestling, as they develop. You can always count on LWOPW to be on top of the major news in the wrestling world, as well as to provide you with analysis, previews, videos, interviews, and editorials on the wrestling world. Catch Rey de Reyes 2022 on FITE.