As the calendar flips over to December, along with the cavalcade of festivities comes time to decide our respective Wrestler of the Year. I’ve shortlisted five names who are in the running for my Wrestler of the Year selection, with each being featured in their own piece. My first pick is Pro Wrestling NOAH’s reigning GHC Heavyweight Champion, Katsuhiko Nakajima.

Katsuhiko Nakajima: The Case to Be 2021 Wrestler Of The Year

Nakajima proclaiming “I am Noah” sums up aptly his positing in the promotion. He’s the star. While his former tag team partner and perennial rival Go Shiozaki is now back aboard the Emerald ship following successful shoulder surgery, Nakajima remains the star of NOAH. He’s been the brightest of a few shining lights in Noah’s 2021.

The wildcard of Kongo has had a somewhat rollercoaster year, with both high-profile wins and high-profile losses (though many more of the former than the latter). In what is a quite staggering list of Match of the Year candidates, Katsuhiko Nakajima has carried much of the weight left by the proverbial ‘Atlas’ when the dreaded injury struck.

To be declared ‘Wrestler of the Year’ or even to entertain shortlisting, a string of high-level, MOTY regarded outings are simply a necessity. Nakajima has this in spades.

A brutal victory alongside then Aggression tag partner Masa Kitamiya over Kazushi Sakuraba and Takashi Sugiura to capture the GHC Heavyweight Tag Team Championships (March 7th, NOAH Great Voyage in Yokohama) was just the first soirée in his stellar 2021.

The implosion of his adored Aggression partnership followed, as unforgivingly Kitamiya stabbed his once brother square in the back. This rivalry brought out an engaging emotion in his character, something we don’t always see. NOAH’s first ever Steel Cage match was the setting of their subsequent battle, as Nakajima and Kitamiya fought it out with the additional interest of it being a Hair vs. Hair clash inside the cage (June 26, NOAH Cage War). They battled brutally, ferociously and shockingly, with Nakajima eventually ending the night with a shaven head following his tag partner claiming the pride of victory. 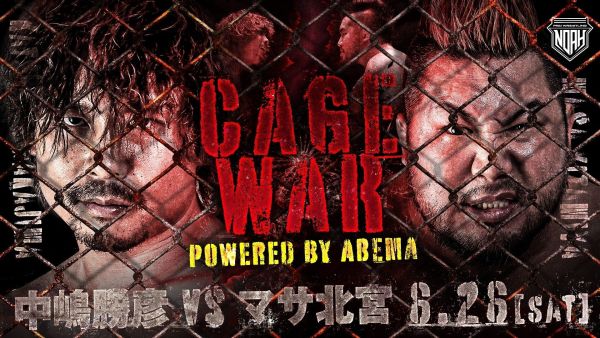 A major setback in what became a year of glory.

He went on to be the protruding figure of the N-1 Victory tournament, losing on the first night to Masato Tanaka before defeating both Kotaro Suzuki and Kazushi Sakuraba to reach the semi-finals. Three great matches, especially his opener against Tanaka.

Surpassing the group stages of the tournament, Nakajima lined up against the legendary Masakatsu Funaki in the semi-finals. A buzzing Korakuen Hall witnessed a thrilling encounter that can best be described as short and sweet. Nakajima advanced to the final, where he faced stablemate Kenoh in what many have as their 2021 Match of the Year pick (October 3, NOAH N-1 Victory Finals). The two Kongo men engaged in a war of pure brutality, with the sole aim of claiming the N-1 Victory trophy at the end of the night.

After an epic 20 minute battle, Katsuhiko Nakajima plunged Kenoh with a Vertical Spike, receiving the coveted three count. A week removed from his victory he steps foot inside the ring opposite GHC Heavyweight Champion, Naomichi Marufuji (October 10, NOAH Grand Square). This was his coronation. In another match that could be anyone’s Match of the Year selection, Katsuhiko Nakajima fought desperately to become GHC Heavyweight Champion – eventually putting away Marufuji in an incredibly enduring battle between two of the very best in the world.

With the prized GHC Heavyweight title around his waist, he saw off a spirited challenge from Masato Tanaka (October 30, NOAH Demolition Stage). Hitting the stiff, stirring strikes that have become synonymous with him. Nakajima managed to avenge his only loss in the N-1 Victory, and thus cleaning his slate of blemishes.

In the match’s aftermath, the Pro Wrestling NOAH fans were shocked as Kenoh left the commentary desk, entered the ring, and challenged Katsuhiko Nakajima. A GHC Heavyweight and GHC National Double Championship match was set – and boy, did it deliver! With the wrestling world’s eyes glued to their match (November 28, NOAH The Best), Katsuhiko Nakajima and Kenoh fought the most attritional hour of pro wrestling you could wish to see. It had more chops, kicks, strikes, knees and impressive manoeuvres than you could ever wish to see! After they battled back and forth in an enthralling, must-see match, the pair had to settle for a draw as the time limit elapsed.

Katsuhiko Nakajima has proven time and time again in 2021 that he is one of the best wrestlers in the world. He’s showcased his immense talent in both singles battles and tag team wars, each time portraying an elegantly charismatic, charming figure of easy-going swagger and well-placed confidence. His kicks are rivalled by none in their blood-curdling, gunshot-esque sound or their gruesome, welt-producing impact. This has always been one of his best qualities.

There really wasn't much narrative to this one, but my God this is possibly the hardest hitting match I've ever seen in my life. Nakajima's glee at inflicting those kicks was just wonderful too. (****3/4) pic.twitter.com/LjXcT7v84z

He is a unique commodity, in that while some can be compared to him, no one will ever be him. That’s why he’s on my Wrestlers of the Year list. In a year where NOAH needed their big-name roster members to step up, Nakajima covered the tab and then some. He’s been the foremost shining light in a promotion which has impressed the puroresu faithful in 2021.

Katsuhiko Nakajima claims he is NOAH, but perhaps he is Wrestler of the Year too.