Tuesday night will be Halloween Havoc as the odes to WCW in NXT continue. Last year when the event returned, Io Shirai successfully defended her NXT Women’s Championship by defeating Candice LeRae in a TLC match. The multiple champions defending Tuesday night hope to say the same. Here’s a look at the NXT 2.0 Halloween Havoc card.

Raquel Gonzalez will look to keep her title reign going as she takes on Toxic Attraction’s leader, Mandy Rose. Rose has become the star of NXT 2.0, being all over the show week after week along with the rest of her group, showing that this could be her time to win championship gold. Rose has never won a title in her WWE career, making this one of the biggest opportunities of her career. Gonzalez, on the other hand, defeated one of the most dominant champions in NXT history in Io Shirai to gain her championship. It’s going to take more than talk for Rose to take the title. The toss-up in this one is that the match will be a “Spin The Wheel, Make a Deal” encounter, meaning that no one will know what kind of match they will be competing in until right before the match.

Time will tell as to who has the advantage, but it certainly feels as though that this is Rose’s time to take over NXT. 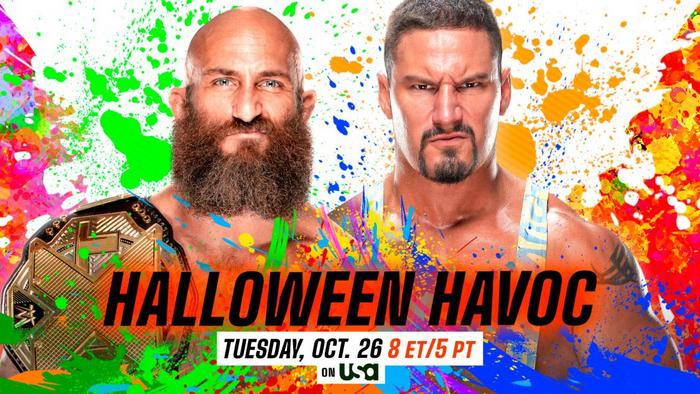 Tommaso Ciampa has never competed in a match where he’s lost when it comes to being NXT Champion. The two-time titleholder won the gold on the first night of NXT 2.0, setting himself as the man to lead the brand into this new age. However, his opponent is what many are calling the breakout star of NXT 2.0. Bron Breakker has been on a warpath to the NXT Championship, showing that despite his rawness in the ring, he has an unmatchable pedigree. It’s the biggest match of his short career and all signs point to him being able to pull off the upset. He defeated LA Knight in his very first match, making an impact instantly, and later that night, he stared down Ciampa.

This is a match that can be described as the most highly antiquated in the (short) history of NXT 2.0 as the world awaits if Breakker can dethrone Ciampa and become the new NXT Champion on Tuesday night.