Monday Night Raw had its most newsworthy episode all year last week when Big E cashed in Money in the Bank to become the new WWE Champion. This week will feel the ramifications of that as a massive main event has already been made with the biggest star of SmackDown makes their way to Raw in what will be a headline “WWE Champion vs. Universal Champion” battle as their respective families go to battle with them. Here’s a look at the WWE Raw card.

The team of Super Brutality has put together some impressive efforts in their first month as a team, coming together after both being on the losing side of the Raw Women’s Championship match at SummerSlam. So much so that they now have a WWE Women’s Tag Team Championship match against Tamina and Natalya. The champions have hed the gold since WrestleMania and while they have had challengers, they have managed to get away with the victory time and time again. A win for Rhea Ripley and Nikki A.S.H. would not only be a major win for both but give WWE another oddball set of tag team champions. It makes sense and if the relationship that they developed continues to grow, they may even be fantastic champions. 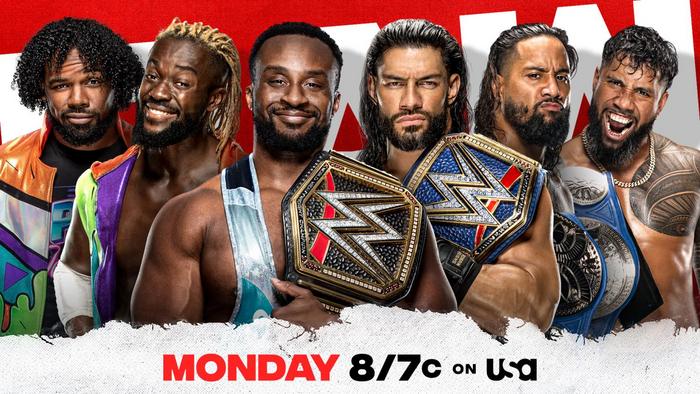 Big E won the WWE Championship and rather than backing down from the Universal Champion Roman Reigns, he got in his face the first night he could at Friday’s SmackDown. This, unfortunately for Big E, led to him getting attacked by The Usos backstage in what was a planned attack. The New Day plan to celebrate the title win of their friend but they plan to go to war as well as it will be family versus family, world champion versus world champion. The Bloodline making their way to SmackDown is a major moment for Raw as the faction warfare dream that fans were hoping for will go down in the main event. The New Day versus The Bloodline. Not only should it deliver but continue the unique story that is being told heading into the WWE Draft.