On the previous episode of ChocoPro, Lulu Pencil took part in the biggest match of her wrestling career against her rival, Chris Brookes. Their feud came to a head in a 30-minute Iron Man Match, and while the Pencil Army commanding officer put forth her greatest effort to date, it was her towering tormentor that emerged victorious. Several hours removed from this encounter, Gatoh Move Pro Wrestling fans may wonder what’s in store next. ChocoPro #138 is almost upon us, so let’s take a deeper dive into the action to come. 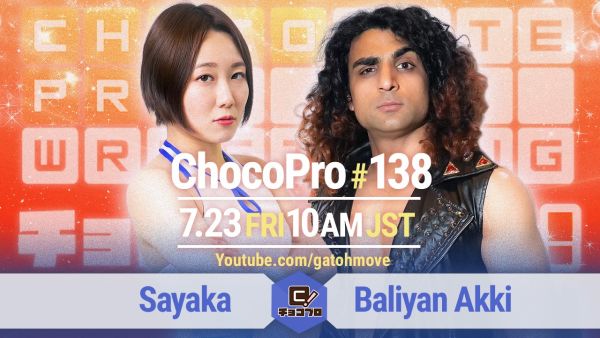 “I’m going to kill you, yay!” Only in Gatoh Move can a threatening declaration sound so lighthearted. Following the sole match of ChocoPro #137, the card for the next show was announced. The first contest will pit “The Beautiful Cosplayer,” Sayaka, against one-half of the Asia Dream Tag Team Champions, Baliyan Akki. It seems like, ever since the One of a Kind Tag League, Sayaka has developed more of a hard-hitting streak. Undoubtedly influenced by her tag league partner, current Super Asia Champion Minoru Fujita, the cosplaying grappler has placed more authority in her strikes and maneuvers, making her that much more formidable.

With that said, she will have to bring her best to ChocoPro #138 if she intends on besting Baliyan Akki. Though he’s currently known in Gatoh Move as one-half of the most dominant team in the promotion, one shouldn’t overlook his singles efforts. Whether against his fellow Gatoh Move combatants or notable outside Japanese stars like DDT Pro‘s HARASHIMA, Akki has proven, time and time again, that he can go the distance. Though it’s easy to side with the high-flying sensation from India as the winner in this match, don’t count Sayaka out so easily.

The main event of ChocoPro #138 will see the reunion of Warm Caterpillars. Mei Suruga and Chie Koishikawa last teamed on episode #69, which dates back to this past November. On this show, the energetic yet mischievous duo lost to the veteran team of Sayaka Obihiro and Gatoh Move founder Emi Sakura. Since then, Suruga and Koishikawa took different paths. While “Mei-chan” went on to win the Asia Dream Tag Team titles the following month, her ally with “Too Much Energy” continued to hone her game, whether on her own or alongside Hagane Shinnou as the team known as Egg Tart. Now, several months later, Warm Caterpillars reunite to face another veteran team.

Earlier this month, Masahiro Takanashi made his official return to action on a special edition ChocoPro event. In the months prior, he had been out of action due to injury; complications in Japan due to COVID-19 halted his return as well. Earlier this month, during said special edition show, he faced Pro Wrestling BASARA‘s Fuminori Abe in a losing effort. Despite this, it was clear that the man bearing the tagline “I Only Live Twice” was back. On this show, he joins forces with the kung-fu specialist Chon Shiryu, who ChocoPro regulars will know as one-half of Dragon Ninja alongside Sayuri. Keep in mind that, in the One of a Kind Tag League, Dragon Ninja ended Block A with 0 points, being the only team to fail to make it on the board. Expect Shiryu to seek out a win on ChocoPro #138.