The big events continue with Fight for the Fallen, and after weeks of waiting, 'The Machine' @MrGMSI_BCage takes his shot at the AEW World Champion @JonMoxley!

Watch Fight for the Fallen on Wednesday, July 15th, at 8e7c on @TNTDrama. #AEWDynamite #AEWonTNT pic.twitter.com/RYtBHd7zMv 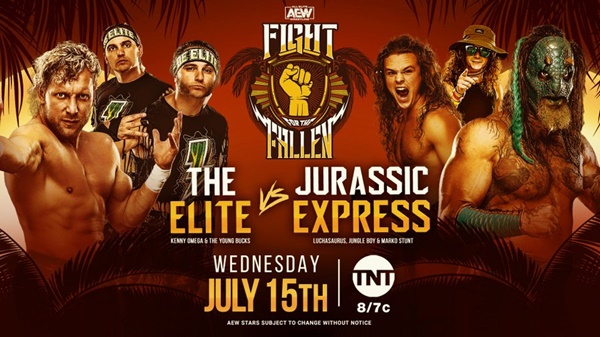 The first billed match of the evening sees The Elite taking on Jurassic Express.  An all babyface match, this one is certainly interesting.  Kenny Omega and The Young Bucks (Matt & Nick Jackson) certainly have the edge when it comes to experience, but it is perfectly arguable that Jurassic Express (Jungle Boy, Luchasaurus and Marko Stunt) are hungrier at this point in their young careers.  Honestly, this has the potential to be a show-stealing, exciting six man tag.  I wouldn’t miss this one. 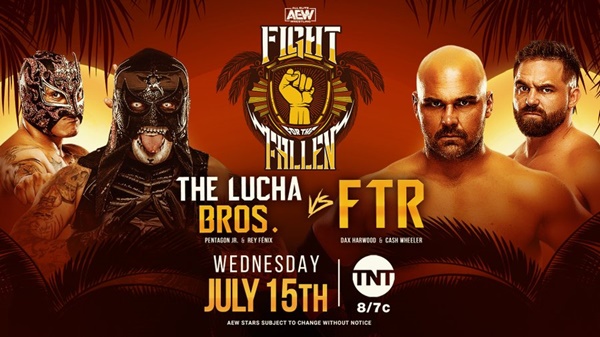 Last week saw the long-anticipated return of the Lucha Bros., Pentagon Jr. and Rey Fenix.  Pentagon has been stranded in Mexico as a result of the COVID-19 situation, whilst Fenix was injured mere days before he was scheduled to compete in the Casino Battle Royale at Double or Nothing 2020.  This week they face fresh opponents in FTR (Dax Harwood and Cash Wheeler).  These two teams are incapable of having a bad match at this level, so the fact they are facing each other is certainly a mouth-watering prospect.  Will the Lucha Bros. return with a win? Or will FTR continue establishing themselves as AEW’s top tag team? 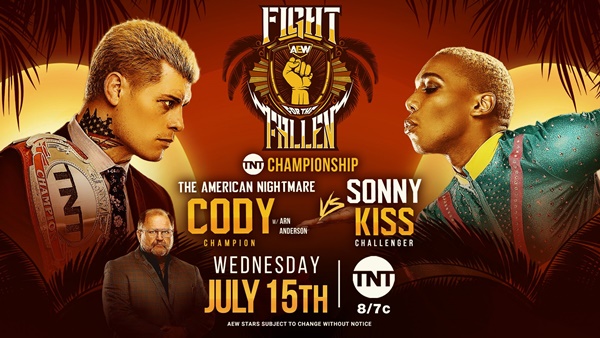 Cody recently announced on Twitter that Sonny Kiss would his next challenger.  The Tweet proved polarizing, with certain fans arguing that Sonny Kiss is unworthy because of his gimmick and because he is a gay man.  This was, of course, a preposterously bad take.  You can dislike Sonny’s character all you want, but to argue he is somehow unworthy of a title shot because of his sexual orientation is ridiculous.  Sonny is an athletic, gifted, worthy competitor who can seriously prove his worth here if given the chance.  This is a real opportunity for him to shut the doubters up and hopefully he does so.  Will Cody be able to successfully defend his TNT Championship once more? Tune in to find out.

The main event of the evening is a match which was supposed to take place at Fyter Fest.  AEW World Champion, Jon Moxley, finally takes on newly crowned FTW Champion, Brian Cage.  Taz has been talking a good game about Mox recently; insinuating that the reason Mox was at home and not at Fyter Fest was that he had a case of the “chicken s***s”.  Taz has been phenomenal as the manager of Cage and has reminded viewers of just how great a talker he is.  All Cage has to do is stand there, look menacing and then eventually back it up in the ring.  Well, the time has come and he has to do just that against his toughest opponent yet.  Mox has defended his title against all-comers and he must now do so against his deadliest opponent yet in Cage.  Can he pull off the victory or will Cage stand tall as champion? Don’t miss AEW Fight for the Fallen on TNT this Wednesday at 8/7c.