At last night’s Ring of Honor Summer Supercard, Matt Taven was successful in defending his title against Alex Shelley. In what would wind up being a match which had Shelley taking the upper hand against Taven, the Motor City Machine Gun could not overcome the ROH World Champion and came up short. After the match, Taven got on the microphone and talked about the dominant champion he has been since he has won the title, naming opponents like Jeff Cobb, Jay Lethal and others. It was then that an unlikely opponent appeared to confront Matt Taven in RUSH, who had won a No-Disqualification match against Dalton Castle earlier in the evening in what was a very decisive victory.

The leader and co-founder of Los Ingobernables simply got into Taven’s face, signaling for a match with the champ. It appears that by all accounts, Ring Of Honor Wrestling is heading into this direction with RUSH versus Taven for the ROH World Title. RUSH and Taven are no strangers to each other. RUSH is partially responsible for Matt Taven’s current hairstyle. It was back at Consejo Mundial de Lucha Libre‘s 85th Aniversario event when RUSH and Barbaro Cavernario defeated the team of Volador Jr. and Matt Taven in the main event which saw Taven lose his luxurious mane of hair.

One year later, the two are back in what could be an intense program with one another. Ever since RUSH’s debut with ROH, he has been on a monstrous run, not having dropped a singles match in his 20 attempts. However, since winning the ROH World Title at the company’s biggest show in its history, the G1 Supercard, Matt Taven has had the belt for 126 consecutive days defeating several strong talents such as the aforementioned names along with other names like Tracy Williams, PCO, Flip Gordon and now, Alex Shelley.

ROH returns to Center Stage in Atlanta, GA for its next set of T.V. tapings. Could we see more from this major story as RUSH looks for his biggest ROH match yet against Matt Taven, who could find himself facing his most credible challenger? Could the title be defended at the next CMLL Aniversario event? Could we see this match happen at a later ROH pay per view or special on HonorClub? Stay tuned for ROH’s social media accounts and television tapings for more. 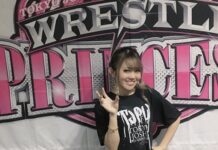 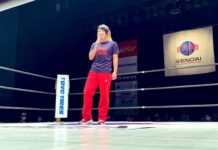