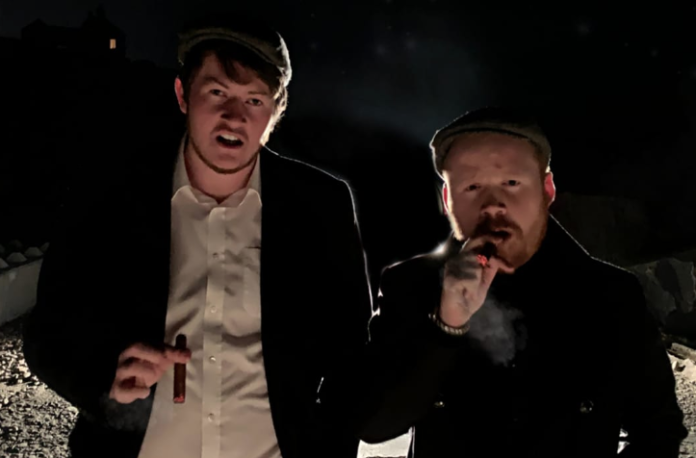 Indie Watch is our regular series that looks at all of the amazing talents working the independent circuits around the world. Some are veterans revitalizing their careers, some are indie prospects hitting their peaks, while others are names to be on the watch for! This edition looks at two young stars from Aberdeen, Scotland known collectively as The Outfit.

Heading into the 2018 Regal Rumble, the WrestleZone (WZ) promotion based in Aberdeen, Scotland had revealed that there would be some new names debuting at the event out of their training academy. One of those names was Dino Del Monte, with the lanky gangster being flanked by his business associate and soon-to-be tag team partner Ted O’Keefe. Del Monte made a lasting impression on the Rumble pre-show, dismantling training academy coach Blue Thunder with the use of his patented discus elbow. Although he was eliminated in fairly quick order from the Regal Rumble Match itself at the hands of Crusher Craib, it was clear that both Dino and Ted were a force to be reckoned with in WrestleZone.

In the months that followed, The Outfit was sharing the ring with some of WZ’s top names, including former two-time Tag Team Champion Kaden Garrick, the longest reigning Undisputed Champion in history Scotty Swift, and multi-time tag champs The Rejected (Chris Archer and Mikkey Vago). In fact, last July saw them begin a rivalry with Archer and Vago, a feud that doesn’t appear to be completely finished nine months later. They’ve traded wins in both singles and tag team action, with Del Monte and O’Keefe coming oh so close to lifting their first set of tag titles within a few months of joining the main roster.

As 2018 winded down, the gangster duo was continuing to rack up some rather impressive wins and was certainly making their presence felt on both the WrestleZone fans and the management team. Their debut year ended with them picking up a win over Blue Thunder and Kaden Garrick at Christmas Chaos followed a month later with a definitive victory over The Rejected at Summerhill Showdown after they targeted the leg of Mikkey Vago for the duration of the match.

That date was the day of Aberdeen Anarchy 2019, the biggest show on the WrestleZone calendar. Dino and Ted were taking part in their first main card Anarchy event, having participated in a pre-show battle royal in 2018. This time around though, they were opening the main card in a three-team bout to determine the contenders for the WrestleZone Tag Team Championships at August’s Battle of the Nations event, a match that also included The Rejected and the new team of The Foundation of the Future (‘Mad Dog’ Bradley Evans and ‘Inspirational’ Ryan Riley). Despite impressive showings from Archer, Vago, Evans, and Riley, that bout would indeed see The Outfit crowned the #1 contenders for the Tag Team Championships after they dropped Vago with a Magic Killer. They now go on to challenge new tag champs Scotty Swift and Johnny Lions on August 17th at Battle of the Nations.

They may be relative newcomers to the WrestleZone roster. Don’t let that fool you though. Dino Del Monte and Ted O’Keefe are no slouches. They’re here to make a name for themselves. They’re here to take over, by order of The Outfit.