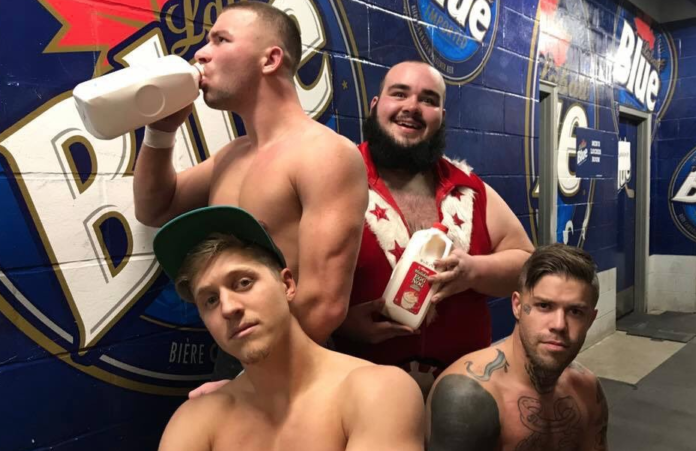 UPDATE: Since the article was published, an official GoFundMe has been set up to help the wrestlers during their recovery for medical costs.

Another blow for the indie scene, in particular the US Northeast and Canadian (Ontario) indies, as a car carrying four members of the Buffalo Brothers – the tight-knit collective of emerging indie stars from the Buffalo, New York area that are breaking out with Empire State Wrestling (ESW) and Limitless in the US and with Smash Wrestling in Canada – hit a patch of black ice while driving home from a show in Montreal, Quebec and hit a guardrail where the car was severely damaged.

Buffalo Brothers @DanielMTGarcia @blaxkwood666 @blaxkwood666 @pufisgod were in a major car accident last night. They hit black ice on the way home from a show and a guardrail just about ripped the car in half. Please send them some love and positive thoughts their way ❤️ pic.twitter.com/DRk7Pn8lSK

Pepper Parks (formerly Braxton Sutter in IMPACT Wrestling and one of the mentors of the Buffalo Boys) reported the accident on Social Media, and soon the others began to update on their condition. Wrestlers Kevin Bennett and Puf had minor injuries, but Kevin Blackwood and Danial Garcia suffered the worse of the four. The latter two were taken into emergency surgery, as Blackwood suffered two broken ankles and head trauma, while Garcia had a badly broken leg (broken femur) on one leg, and a broken ankle on the other.

It’s been a rough one. Thanks to everyone who’s reached out. Mostly right now I’m worried about @DanielMTGarcia and I’m hoping he comes back to this room ASAP but you know the buffalo brothers. We can’t be stopped ? pic.twitter.com/HmPYpmNpMD

The four had just finished wrestling for Federation de Lutte Quebecoise (FLQ), a sister promotion to Smash Wrestling out of Toronto, and was heading home when the accident occurred.

I LOVE MONTREAL!! @FLQWrestling was incredible tonight! Buffalo Brothers 4-way round two was probably my favorite match I’ve ever wrestled. I love @DanielMTGarcia @TheKevinBennett @blaxkwood666 so much.

The staff of Last Word on Pro Wrestling send out their good vibes for a speedy return to the ring for these four talented men as they enter a new year of professional wrestling!

In the meantime, you can click the links below to purchase merch from any of the four to help with medical bills during their time away from wrestling.