Either you have hear of him in every club that plays “Spanish” music or for his number one single with Cardi B & J Balvin “I Like It”, Bad Bunny is everywhere you go. The Puerto Rican rapper is one of the fastest rising star of the Latin Trap scene and urban music in general.  His looks, his appeal, the way he presents himself gives him a unique vibe that have made many Latinos and non-Latinos fall in love with the self-proclaim New Religion. Behind his success, there’s something that Bad Bunny has made clear, he loves music, fashion and PRO WRESTLING! Turns out that Benito Antonio (his real name) has a passion for pro wrestling like no other artist.

It all started when Bad Bunny alongside his producer and owner of the label Hear this Music DJ Luian and Farruko were present in Orlando backstage at WrestleMania 33. The Messiah of Trap took photos with Matt & Jeff Hardy – which both are one of his favorites since growing up – and even WWE Universal Champion Brock Lersnar.

Later that year, he broke the internet and the charts with his single “Chambea”, which feature a video with multiple-times world champion and WWE Hall of Famer Ric Flair. The song exploded on social media, with Bad Bunny professing verses in honor of his love for Pro Wrestling while dancing alongside Ric Flair.

In the famous 25th Anniversary of Monday Night Raw, Bad Bunny once again was present backstage in a big WWE event. He was invited by Flair backstage – in a friendship that has seen Flair appearing in Latin Music Awards – and even took photos with Flair’s daughter and former WWE Women’s Champion Charlotte.

Then, again, in WrestleMania 34 and in the Monday Night Raw After WrestleMania, Bad Bunny and DJ Luian were present at both events.

Putting wrestling in his verses

Bad Bunny has made it almost essential to put wrestling in his verses and while in the past that might have been suicide by anyone rapping, Benito’s smoothness makes it sound cool when he is telling his enemies that he is going to leave his enemies to R.I.P like The Undertaker.

Here’s some example at Bad Bunny’s verses dedicated to wrestling:

“The Devil calls me, but Jesus Christ hugs me (amen)

This one packs more wrestling that any other song

“Bring the bottles that the NWO has arrived”

“The Undertaker has arrived to give you Rest in Peace”

The song that started the frenzy

“I don’t get along with anybody, with are rocking flow Stone Cold (What?)” 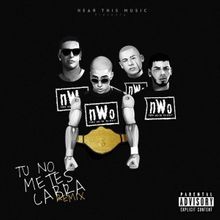 the lights goes off”

Not a song, but an interview with Complex, that shows Bad Bunny insane love for Wrestling. Here he rocks a WWF Vintage T-Shirt and can be seen in the ladder (at 8:10) saying, “Like Jeff Hardy getting the title”.