The Cleveland Browns defensive woes may be over if their unique pass coverage works to their advantage. While defensive coordinator Joe Woods employed one of the biggest varieties of unique coverage schemes, Pro Football Focus recently demonstrated that it does not necessarily mean a team will win. Much of the Browns 2020 success cannot be attributed to their defense, but there are hopes that will change this season.

Are Cleveland Browns Defensive Woes Almost Over in 2021?

The Browns were somewhere in the middle in yards given up, worse against the pass and better against the run. Defense faced the 22nd most rushing attempts (412) and eighth most passing attempts (585) in 2020.

The secondary left much to be desired, but Woods showed a variety of coverages. In fact, PFF’s Tej Seth and Ryan Weisman put Cleveland at ninth most coverage uniqueness. 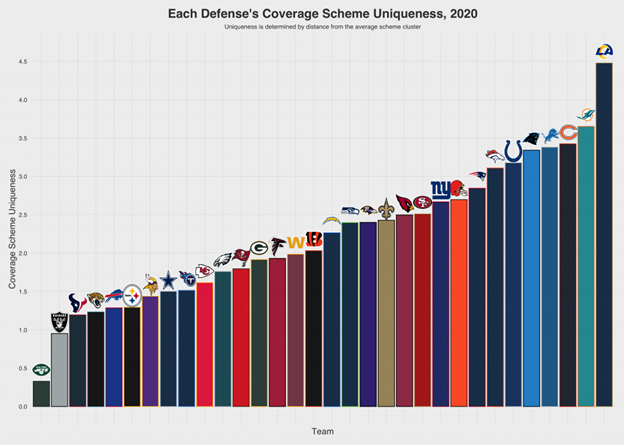 What Is Coverage Uniqueness?

Seth and Weisman created a new statistic – coverage scheme uniqueness. The statistic takes “how far away a team’s Principal Component Analysis is away from the origin. The more different a coverage is from the rest of the NFL, the higher their uniqueness score will be.”

Seth and Weisman found that being unique doesn’t automatically mean great coverage, but at the same time, some of the best defenses were unique. Based on their findings, the top teams had excellent pass rushes (New Orleans Saints, Tampa Bay Buccaneers, Baltimore Ravens and Pittsburgh Steelers) or uniqueness (Miami Dolphins and Los Angeles Rams) – but not both.

Evidently the Browns, while successful in 2020, could not place much credit on the defense. Their uniqueness in coverage was not quite enough to be on par with the performance of the offense. 2021 may be entirely different though.

Will Woods Continue With His Diverse Scheme Calls?

The Browns have addressed the issues within their secondary this off-season. Many of their starters, like Andrew Sendejo and Karl Joseph are no longer in Cleveland. But with the addition of John Johnson III and Troy Hill, the return of Grant Delpit and Greedy Williams, and top draft pick Greg Newsome II, there is plenty of reason to assume this season will be better for the troubled secondary.

Now that there are considerable, dare we say, improvements, to the secondary and defensive line, Woods continuing his varied scheme calls could bear great results.

Jared Mueller of Brownswire believes the Browns may achieve the ideal combination of coverage uniqueness and a good pass rush. The latter would of course feature Myles Garrett, Jadeveon Clowney, Takk McKinley and Malik Jackson. Additionally, the team has more talent in the form of Jeremiah Owusu-Koramoah and Anthony Walker at linebacker. They may be a way for the Browns to add more to their already diverse coverages.

The Browns have made so many leaps as a team and their offense has been applauded for putting them in a better position than ever before. Defensively, the pieces are all in place for a significant improvement. There is absolutely nothing wrong with being unique in their coverage. It may not have proven overly fruitful in 2020, but with player upgrades and a defensive coordinator who clearly has the right ideas, the Browns are even closer to be being one of the best teams in the league.