The Pittsburgh Steelers iconic logo seen on their helmets and jerseys have been almost unchanged since the team first adopted it in 1969. The current iteration has a past that is as tied to the community it represents as any other in the NFL. With some rather surprising alliances with the Philadelphia Eagles and Chicago Cardinals (Bears), the logo’s history is hardly short of intrigue. But if you ask most from Pittsburgh, they are happy to keep things as they are.

What was the first logo the Steelers used?

The old Steelers logos were much different from the current. The first was the coat of arms of the city, Pittsburgh, while the team was first known as the Pirates.

The next version incorporated a football shaped-logo as the team became the Pittsburgh Steelers Football Club. The logo paid homage to the city’s roots with the smoky cityscape and construction worker holding a pennant.

As WWII was in full swing and the US deeply embroiled, production in many industries was at a minimum. The economy was doing poorly, and cities like Pittsburgh and Philadelphia experienced work shortages and manpower difficulties. The two teams, the Pittsburgh Steelers and Philadelphia Eagles, merged to form the Phil-Pitt Eagles — or the awkward-sounding Steagles. It lasted just a year and was probably the last time the two cared to be in each other’s company.

A year later in 1944, the team left Philadelphia to join up with Chicago Cardinals. The blended name Card-Pitt, thankfully, also lasted just one year.

After two years of merged names and the war having ended, the team refamiliarized itself with its old logo and name once more, which lasted until the cartoon-like iteration in 1962. Often associated with the mascot Steely McBeam, the logo was the last one to feature for the Steelers before it was replaced with the one we know today — well, minus the black trim added in 2002. 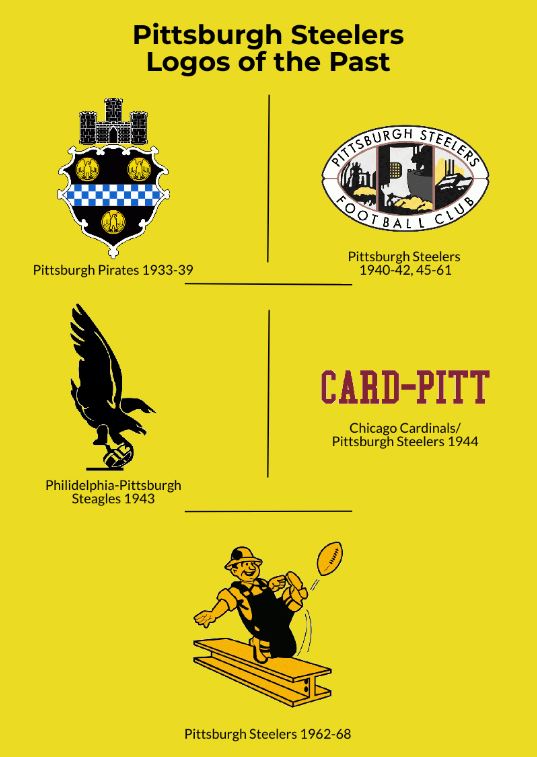 What does the Steelers logo mean?

Let’s set the record straight — the current logo is not exactly the one that was first used in 1969, and continued with the dominant teams in the 70s and 90s.  In 2001, a very modest change added a black trim outlining the silver circular ring. If anything, it does present well on lighter backgrounds.

The familiar three-diamoned logo — which is actually referred to as “astroid hypocycloids” — are represented in yellow, red, and blue.  The meaning behind the adoption of the three diamonds intended to be: “Steel lightens your work, brightens your leisure, and widens your world.” The shape was taken from the “Steelmark” logo created by U.S. Steel — now owned by American Iron and Steel Institute (AISI) — in their efforts to detail the importance of their industry. The color significance is to highlight the three stages of steel production: coal (yellow), iron ore (red), and scrap steel (blue).

As for having “Steelers” within the logo, it was originally written as “Steel”. The formal request to modify that to represent the team was accepted, and the “ers” was added. The first version of the current was formalized in 1969. 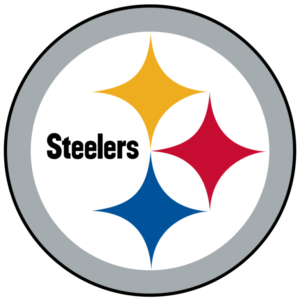 In 2002, when Reebok replaced Nike as the official jersey of the NFL, the company tried to force all teams to change. NFL legendary owner Art Rooney refused vehemently. After much pushback, Reebok softened their stance, allowing them and others to keep their logo. Rooney didn’t stop there. Less than a decade later, he again refused to change. Nike won back their deal to supply the NFL with their jerseys, but Rooney refused to change.

Why is the Steelers logo on one side of their helmet?