Justin Holl has become somewhat of a controversial topic when it comes to Toronto Maple Leaf fans. More often than not, it seems as if he is either considered a useful top-four player, or a guy who shouldn’t even be in an NHL lineup. In reality, it’s probably somewhere in the middle of that. Holl has some upside but also his limits too. However, one team that could use a player like Holl is the Ottawa Senators. Despite being rivals, here is why a Justin Holl trade could work for both sides.

Let’s start with Holl as a player. We mentioned earlier his reputation varies depending on who you ask. Some view him as a needed bigger body in the Leafs lineup that is often called “soft”. Others view him as a replaceable piece that should be moved to make cap space. There are arguments for and against both sides, but one thing is for sure, Holl is a useful NHL defenceman. While he absolutely has his limitations, you usually know what to expect from Holl.

He isn’t going to help provide much offence or flash much skill, but he will use his body effectively and can move the puck at an NHL level. At 5v5 last year, Holl posted a CF% of 52% and an xGF% of 54.69%. These ranked seventh and fourth among eight Leafs defencemen respectively. Considering many thought of this as somewhat of a down season, these numbers are still respectable. Everything about Holl points to a guy who is mainly a bottom-pair player that can elevate up the lineup if needed and put with a better player as his partner. 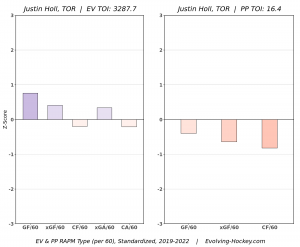 We have outlined that Holl is an NHL-level player. So why would a team like Toronto want to get rid of him? The answer comes down to depth and cost. The Leafs are right up against the cap, and for all the narratives of their defence, they are actually pretty deep down the right side. T.J. Brodie and Timothy Liljegren play the right side and they have also signed Jordie Benn and Victor Mete who both can play the right as well.

Holl might be better than the latter two names but he also makes $2 million against the cap this season. Mete and Benn are both on $750,000 deals and saving the $1,250,000 would mean the Leafs could keep an extra player on their roster all year.

If the Leafs sign ZAR for ~$800K and Sandin for ~$1.4MM, they can carry a 20 man roster with ~$650K in cap space by trading only Holl. You can push that space up by sending a player up and down on off days so that you can afford a league min scratch. I suspect this is their plan.

It all comes down to cost savings. Even if Holl is slightly better than other options, the additional cost may not make it worth it for the Leafs to keep him on their roster. Regardless, the Leafs would need a partner for a Justin Holl trade. Enter, the Ottawa Senators.

Here is where some wishful thinking has to come in. This article is based on the thought that Ottawa actively wants to upgrade its blueline, even if they need to eat money to do so. It does seem like the team wants to do that, but to what degree? Rumours swirled all offseason that the Sens were looking to move Nikita Zaitsev. That still needs to happen, especially if Ottawa wants to compete for the playoffs. We showed Holl’s RAPM Chart from EvolvingHockey above, now take a look at Zaitsev and Travis Hamonic over the past three seasons as a comparison. 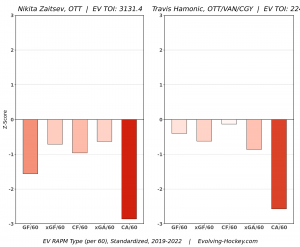 A team that seriously wants to compete probably shouldn’t have one of these guys in their lineup, they absolutely can’t have two. Upgrading on at least one of them is a must for the Ottawa Senators. Both defenders bleed chances when they are on the ice and don’t help provide any offence. No amount of physical play can make up for that, especially when they are not very effective on the penalty kill either (Zaitsev especially).

This is why a Justin Holl trade could benefit Ottawa. While he is not a legit top-four guy, he is much better than some of the current options available. Additionally, he checks off the box that most coaches, including DJ Smith, like to have of a “veteran” on the defence core. Lassi Thomson or Jacob Bernard-Docker would also be upgrades on the right side, but will the Sens trust them both? Adding Holl would give them some insurance that would be useful for the team.

At the end of the day, you have one team that would probably like to keep Holl, but may not be able to afford it. You have another that desperately needs to upgrade their right side. There is still the question of what to do with Zaitsev or Hamonic if you are Ottawa. At this point, the easiest solution may just be to waive Zaitsev. It seems unlikely anyone would pick up his contract. But waiving him would save the team just under $1.2 million on the cap.

Usually, this wouldn’t even be an option for Ottawa. However, we did see them put Michael Del Zotto down last year. That prior combined with the Senators’ obvious instructions to spend money this offseason makes it at least more likely they’d be willing to send such a large deal to the AHL. At least until a possible further trade could be figured out.

The final piece of the puzzle in a Justin Holl trade would be Holl himself. He does have a modified 10-team no-trade clause. So, why should he allow a trade to Ottawa? For starters, his chance for ice time would greatly increase in Ottawa. There would be an argument he could be a good partner for Thomas Chabot. And even if he isn’t, the second or third defence pair is wide open on the right side. That may not be the case in Toronto.

“As the season went on I started accumulating more responsibility, so that was good and I’m just looking to build on that.”

The other reason is that this Ottawa team is finally looking to take that next step. It makes sense for players to have Ottawa on the no-trade list given how bad they have been. But when you look at the teams that have cap space for Holl, Ottawa is one of the best fits. Seeing additional playing time with a young exciting team doesn’t seem like the worst scenario in the world.

This might be the most interesting part of it all. Holl is not moving for a premium asset, that is for sure. However, the return likely comes down to how desperate Toronto is to move him. If they are OK staying with Holl, regardless of the cap implications, it seems unlikely he moves for anything less than a 4th round pick. The ask may even be slightly higher than that. However, if the Leafs truly do feel they need to move away, maybe the pick becomes lower. Or maybe they look for a cheap roster player to help with their cap situation.

Joey Anderson was acquired for Andreas Johnsson a couple of years ago, it is possible that a similar idea is looked at. Toronto clearly gave away the better player in that deal, but Johnsson made almost triple what Anderson made. For Toronto, they looked at Anderson as a valuable asset to be a depth forward if needed in a pinch. A luxury they could no longer afford with Johnsson. Could a deal around someone like Jayce Hawryluk plus a draft pick be made? Hawryluk may be a little too old for the Leafs to be targeting, but the idea of a player who is on the cusp of being a regular NHLer may work.

At the end of the day, it is an interesting option to look at for all sides involved. A Justin Holl trade would help Ottawa improve their team. It would also allow the Leafs to have some much-needed flexibility when it comes to the cap. And they would be moving out a player that doesn’t appear to be in their long-term plans anyways.

Because of that, Holl could get a fresh start and a chance to prove he deserves another medium-length contract. Whether that be from Ottawa or another team. The Senators wouldn’t be committing anything long-term as Holl’s deal is up this coming offseason, and they do have an extra fourth-round pick in next year’s draft if they want to spend it on a player such as Holl.

At this point in the offseason, you don’t see too many deals, but a Justin Holl trade could benefit everyone involved.