Everyone knows that the Arizona Coyotes 2021-22 season may not be a huge success. It never is when you’re going through a rebuild/tanking process. Yet, general manager Bill Armstrong and new head coach Andre Tourigny are hoping that with 19 players on contracts ending after this new season, the motivation to stick around can be a positive thing. Armstrong chose Tourigny for a reason. Per ESPN.com Armstrong stated, “He was known as this big, tough coach, and I watched him with his players for two hours,” Armstrong said. “I was fascinated by his ability to interact with his young kids and at the same time get the most of them on the ice.”

With Tourigny’s belief in holding all players accountable, his system is rigid. Yet, if he can make it work, this team could surprise some (including this writer).  “With time, they understand I care about them as a person,” Tourigny said. “The player has a job and there’s no gray area. It will be black and white and we’ll be relentless and we’ll hold them accountable. But that doesn’t mean we don’t like the person.” They will be in a new environment of the Central Division which means they will travel more than almost every team in the NHL.

This coaching philosophy is extremely different from former head coach Rick Tocchet. As a former player, he knew what it took to make it in the NHL. Yet, he couldn’t take his team there and was let go after four seasons. Tourigny’s resume shows him being a former NHL assistant coach with the Ottawa Senators and Colorado Avalanche. He also possesses extensive coaching experience with Team Canada, collecting a silver medal as head coach at the 2021 World Juniors and gold as an assistant to Gerard Gallant at last month’s world championships. He knows what it takes to win.

Whenever an NHL team has a former player as a head coach, they may assume that he’s “one” of them and thus can get away with bending rules and such. With Tourigny, that won’t happen. During the world championships, two of his players were one minute late for practice and Tournigy excluded them from the session. Every player has the same rules and will be treated equally. That’s his philosophy and call it rigid, but by the players seeing that, there won’t be any locker room squabbles on the unfair treatment of certain privileged players.

The Arizona Coyotes 2021-22 May Be a Disappointment

Most projections place the Coyotes last in the Central Division if not last in the NHL standings this coming season. With that said, their goal (whether hidden or not) is to win the draft lottery in the next two seasons. The prize? Either Shane Wright or Connor Bedard, giving the Yotes that generational centre they so desperately need. 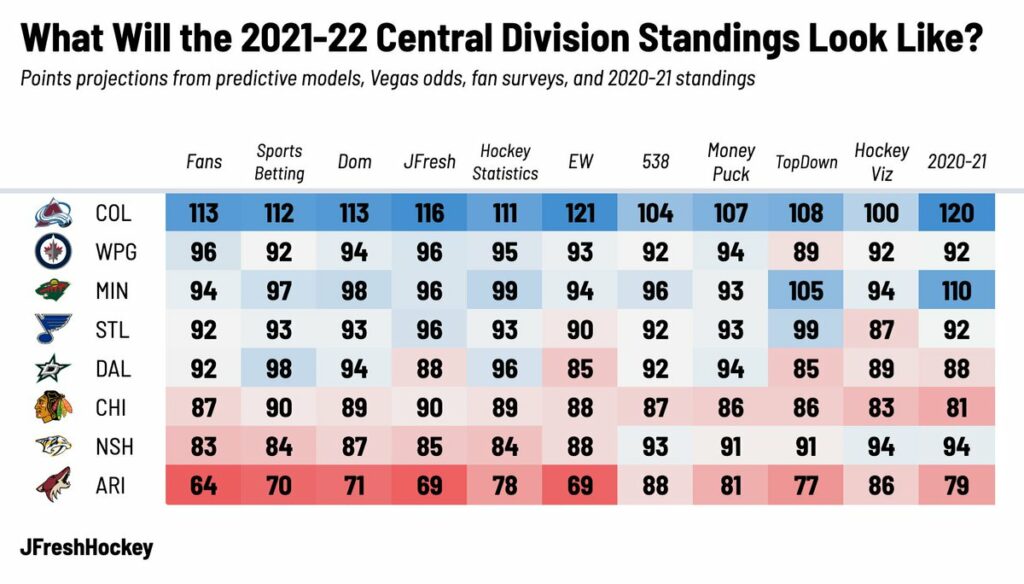 So, what other teams are competing for those two talented future NHL players? The Anaheim Ducks, Arizona, Buffalo Sabres, Columbus Blue Jackets and Ottawa all with 20,000-to-1 odds to win the Stanley Cup, and the Detroit Red Wings are 15,000-to-1 odds to win it. That means the Coyotes stand a chance to actually acquire a centre that will help them build a team that can compete in the future. Knowing that the team has had really rotten luck with winning the lottery, or even having a draft pick higher than #3, don’t hold your breath. Last season the team with the worst record only held a 16.6 percent chance of winning the lottery.

Which Players Could Be on The Roster Three Years From Now

With only three players signed long-term, this team is bound to have more changes than stability. Clayton Keller, Nick Schmaltz, and Jakob Chychrun, and possibly Victor Soderstrom if he stays on the final roster, are signed beyond 2022-23. And, who knows if Keller and Schmaltz will even be around. A lot will depend on if they earn the contracts they’ve been awarded. We all know Chychrun is here to stay and will be the player the franchise builds around. So, is it possible that by the time a future possible new arena in Tempe is an actuality, that the Coyotes gel into a contender? Time will tell.

Then, there’s the Phil Kessel question. Will he be able to continue his ironman streak in a Coyotes’ uniform? Possibly not. He wants out and the team is more than willing to oblige him once they get an acceptable return offer. That may happen sooner or later, and it would also leave a roster spot open for a player like Liam O’Brien or Jan Jenik.

Hungry Atmosphere is No Guarantee for Success

While Tourigny and Armstrong may be correct in hoping players playing for their next contract are hungry, there is no guarantee that will lead to a winning team. The Coyotes are taking a step back in hopes of building for the future. Was it too large of a gamble? Losing quality players like Darcy Kuemper, Oliver Ekman-Larsson, Conor Garland, and Christian Dvorak while maybe necessary makes it difficult if not impossible to justify that to loyal fans.

The Arizona Coyotes 2021-22 season will be painful. Make no mistake about it. Now, it is the future that holds the most promise.