Earlier on Sunday, it looked like the Pittsburgh Penguins would only be making a small depth move. There were reports that Anaheim’s Nicolas Deslauriers was going to be traded to Pittsburgh, only to have it fade away. After that, general manager Ron Hextall made his first trade with the team, acquiring Los Angeles Kings forward Jeff Carter.

In return, LA got two conditional picks. They also retained half of his $5.27 million salary. It was a move that struck a lot of people by surprise since it didn’t seem like Carter was on the trade block heading into Monday’s deadline. That said, this is a move that makes a lot of sense for the Penguins as they have a real shot at making a run to the Stanley Cup this season. Let’s take a look at what Carter brings to the table for Pittsburgh.

Before this trade, it was looking like Mark Jankowski was going to be in the lineup if the playoffs had started. That would’ve been no good considering that half of his goals this year are empty netters and he hadn’t produced any offense outside of that. With this move, Carter will bump Jankowski out of the lineup as he can play center or wing, though the best position for him is likely center. It’s a position that he’s played for most of his career and the position he’s put up his best stats. If he goes to center, the lines could look something like this when the team is healthy:

It allows McCann (who’s enjoying one of the best seasons of his career) to move back up with Malkin while also having Carter play with the best linemates he’s played with all season. Before this move, he was skating on a line with Andreas Athanasiou and Blake Lizotte, which is a far cry from Zucker and Rodrigues.

Strong Underlying Numbers and a Willingness to Shoot

Even though the Kings weren’t having a good season, Carter had been putting up some strong offensive number this year as seen here (via Evolving Hockey): 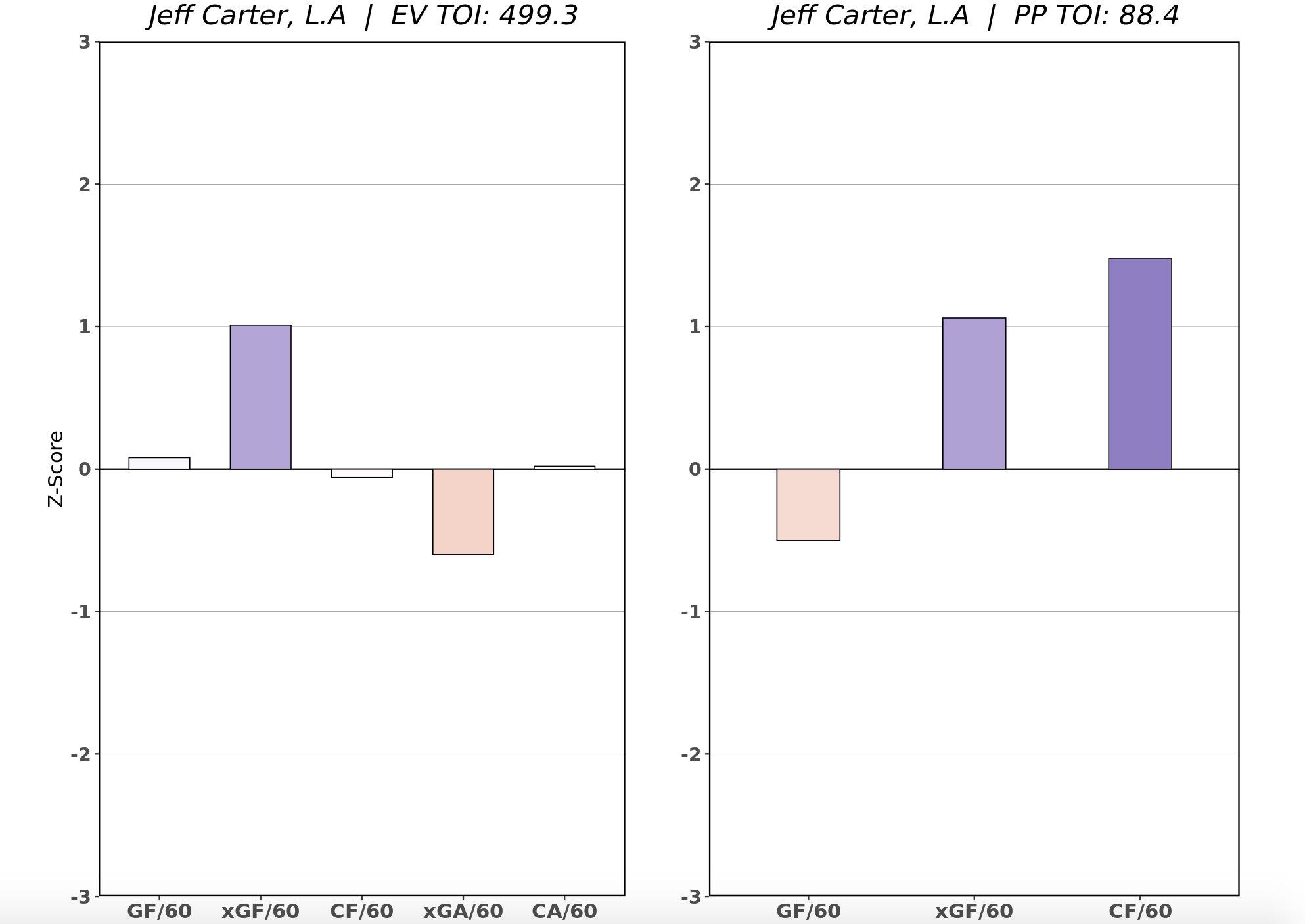 His xGF/60 (expected goals for per 60 minutes) has been especially better this year than compared to last year at both 5v5 and on the man advantage. It hardly got above 0 for the 2019-2020 season which means he wasn’t a net positive at the offensive side of the ice. His GAR (goals above replacement) has also rebounded nicely this season as seen in this article from Geoff of The Pensblog here.

These numbers have the opportunity to only get higher as he’ll not only get better linemates but not face as tough competition. Mike Sullivan usually likes to give his third line plenty of offensive zone starts so they can get the better of the chances on a nightly basis. That way, he can ice the ZAR-Blueger-Tanev line against whichever line he wants since that’s considered the shutdown line when everyone is fully healthy.

Carter also takes a ton of shots, especially in the high-danger areas: 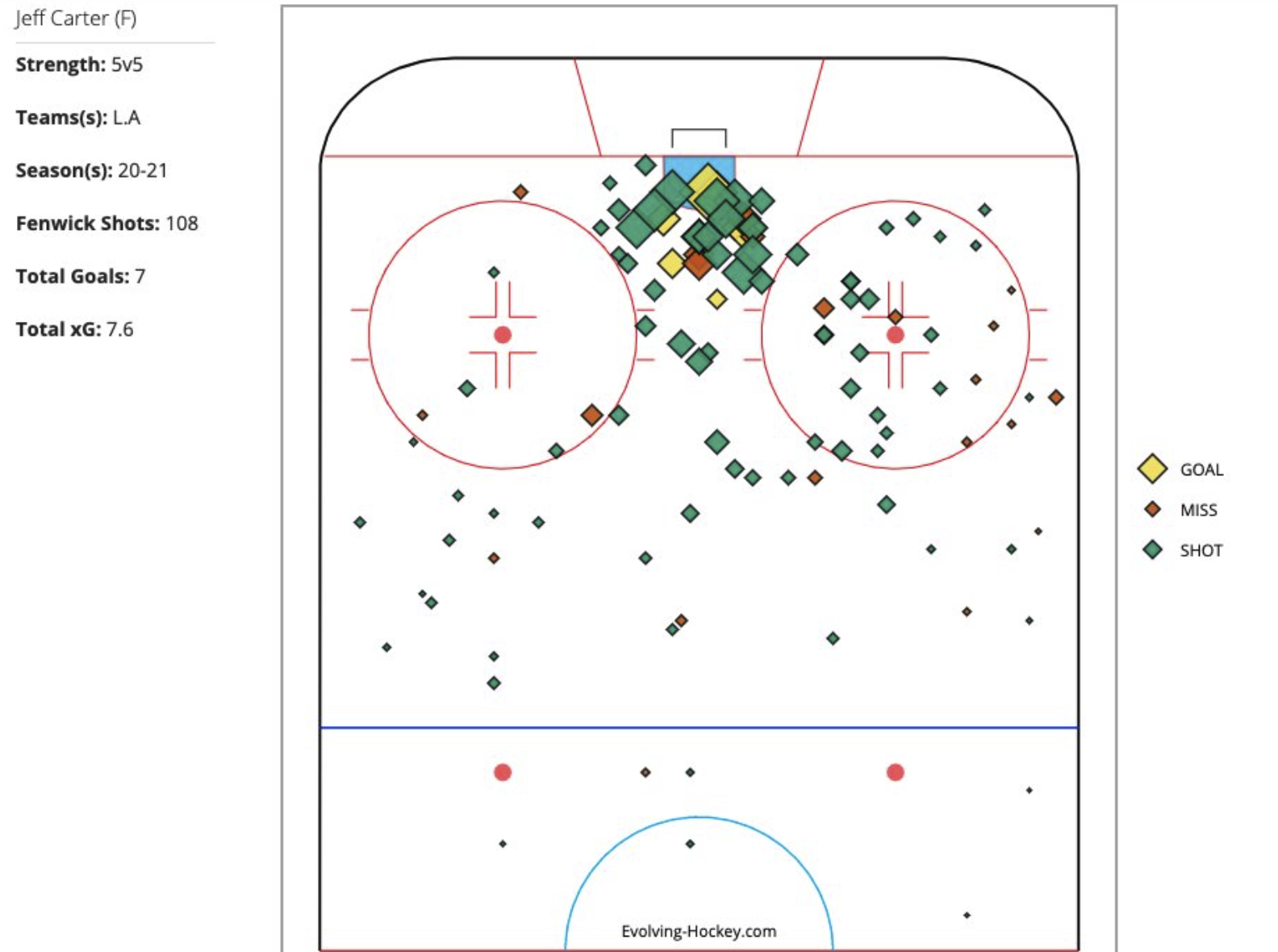 If you zoom in further on the chart, all of Carter’s 5v5 goals were scored right in front of the net. This can also be seen in a video with some highlights:

Fast forward to the two-minute mark and watch how Carter finds a soft spot in the defense. He gets around everyone and takes a pass to the front of the net and makes no mistake with it. It’s plays like this that gave him the reputation for being one of the best goal scorers in the league when he was in his prime. It’s an asset that’s going to help the Penguins immensely down the stretch and into the playoffs.

There have been some people comparing Carter to Patrick Marleau from last season and that’s ill-advised. Carter can still skate exceptionally well for being 36-years old. Pittsburgh has always been a straight line team and their speed gave everyone fits when they won back-to-back cups in 2016 and 2017. That’s still something they’re trying to emulate this season and Carter fits the bill to perfection. Let’s get to a couple of videos to check this out:

In the first video, Carter starts right next to defenseman Alec Martinez for a brief moment. After that, he blows past him after receiving the pass and goes forehand-backhand for the clinching goal.

For this second clip, notice how quickly he gains the zone after transitioning from playing defense. After that, he’s gone as he goes to the front of the net and cashes in on the garbage.

This doesn’t look like a player who has lost many steps in his game, especially when it comes to his speed. If you factor in the cost to acquire him, it’s a no-brainer for the Penguins, who look to be on the cusp of another Stanley Cup Playoff run.