It’s game night and the Toronto Maple Leafs lost again. Fans are angry and Twitter is on fire. Sure their overall record is alright, but this loss is unacceptable because “other teams just don’t lose like that”. Admittedly, the way they lose can be difficult to watch. Sometimes it honestly looks like half the team doesn’t care. This leads to a lot of discussions that the Toronto Maple Leafs play is particularly inconsistent.

There has always been reason to be skeptical of this narrative. All teams have painful nights where it doesn’t even look like they are trying. Even teams that go on to win the Stanley Cup. The problem is it upsets more people when the Leafs do it, and more people hear about it as result. So today let’s dive into the data to see if the Toronto Maple Leafs play is inconsistent, or if this narrative is overblown.

For the purpose of this post, we are talking about the variance of a team’s even-strength results. We are going to focus on Expected Goals (xG). xG takes all a game’s shots and weighs them based on the probability they become a goal. This way a point shot is worth far less than a rebound in front of the net. xG ends up being far less random in one game samples than actual goals data. It also doesn’t account for goalies. So if your team gets shelled but wins 1-0, xG stills shows the team got outplayed.

How does Toronto’s game to game xG differential standard deviation stack up to the rest of the league? Let’s compare them to the other competitive teams in the NHL over the past 2 seasons. 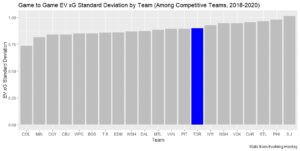 The Leafs have the 8th highest standard deviation of xG differential at the game level. This is some evidence of “inconsistency”. It shows the Leafs results vary more than the average competitive team from game to game, but it’s nothing definitive. The reason why is that “variance” can be good or bad. For example, let’s compare the Leafs distribution to the Vegas Golden Knights over the same period.

The Knights are a high variance team, but are they inconsistent? Well yes, just in a good way. They tend to dominate their opponents, what varies so widely is by how much. Sometimes they crush their opponents, other times they only out chance them by a small amount. So to see if the Leafs are more inconsistent than most in the painful way we have all become custom to, we will need a different measure of inconsistency.

This brings us to what I’m calling “loss threshold”. Counting games as below the loss threshold when a team loses the even-strength expected goals battle by at least a full goal. Games like these are disastrous. They are generally the kind of games that light that fanbases twitter-sphere on fire because they were just getting shelled. 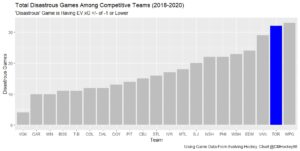 The Toronto Maple Leafs lost the even-strength expected goals battle by one xG or more 32 times in the past two seasons. This is the second-most games below the loss threshold of the competitive teams over the past two seasons. Toronto getting crushed this often is a massive red flag, showing they are hilariously inconsistent, but it gets even worse.

Obviously how many games teams have below the loss threshold is correlated with their overall ability to drive play. Toronto has been fairly good at driving play over the past two seasons, with an xGF% around 52%. This is well above average, but not quite elite. So, we should account for a team’s overall ability when looking at the team’s games below the loss threshold. 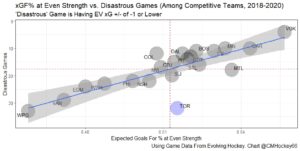 Toronto is the biggest outlier by a mile here. They drive play like a strong team but have been crushed as often as we would expect a bottom feeder too. Toronto had 32 games in the previous two seasons below the loss threshold, and other teams around Toronto’s quality only have half of that. The Toronto Maple Leafs appear to have had as many disastrous as some of the weakest play driving teams in the NHL, despite the fact their overall results are pretty strong. It’s also worth noting no other team’s number of disastrous games is that far away from their overall xG%, this problem has only existed in Toronto.

So, next time Toronto has a terrible game, then Twitter lights on fire talking about how other teams don’t have this many awful showings, know it’s not fans being overdramatic. The Leafs have been the most inconsistent team in the league by a considerable margin. They are still a strong team who has generally outplayed their opponents, but their bad nights have been way more common than any other team of their calibre.

They get filled in at even strength as often as some of the worst play driving teams in the NHL, and they are the only competitive team in the league with a large difference between their overall ability to drive play and how often they have been dominated at even strength. Looks like I was wrong. Sure every team has their off nights, but nobody has had off nights nearly as often as the Toronto Maple Leafs over the past two seasons.