The New Jersey Devils have re-signed defencemen Will Butcher to a three-year contract worth $11.9 million, or $3.73 million per season. This contract carries him through the 2021-22 season. They two parties were set to go to arbitration on Aug. 2.

Will Butcher and NJ avoid arbitration at 3 years, $3.73M

Will Butcher Staying In New Jersey

Butcher has spent the first two years of his career with the Devils. He has put up 9 goals and 65 assists for 74 career points in 159 career games. Butcher has a goal and an assist for four points in 9 Stanley Cup Playoff games. He was originally drafted in the fifth round, 123rd overall of the 2013 NHL Draft by the Colorado Avalanche.

Last season he scored four goals and 26 assists for 30 points. He also added 18 minutes in penalties. His possession numbers were 50.4 percent Corsi and a relative Corsi of +4.9.

General manager Ray Shero has made another move in an off-season that has seen the Devils remake their roster.

What This Means for the Future of Will Butcher

Butcher is a solid young defenceman that spent last year on the third pairing along with Steven Santini. This also gives the Devils some stability on the blue-line seeing that only three defense played more than 54 games last season. He adds speed on the blue-line for the Devils along with giving them a boost on the power-play. He was a part of the Devils second PP unit last year and led the team in PP assists with 20. In his rookie season, he came in second in that category four points behind Taylor Hall.

Butcher should continue to see time on the man-advantage for the Devils next season and it wouldn’t be a shock if they tried him out on the first pairing. He has proven that he can produce with the man advantage. It will be interesting to see how big of a role Butcher ends up playing on the Devils blue-line next season. 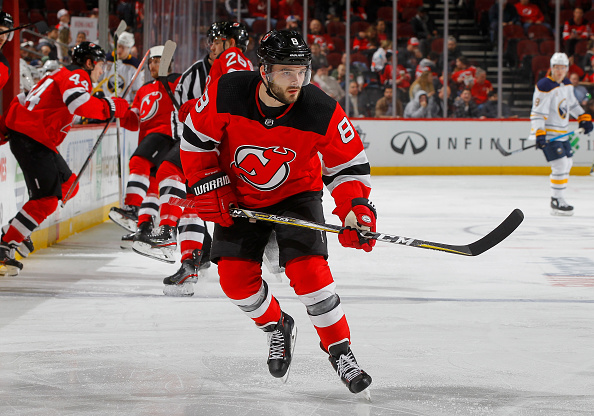 NEWARK, NJ – MARCH 25: Will Butcher #8 of the New Jersey Devils in action against the Buffalo Sabres at Prudential Center on March 25, 2019 in Newark, New Jersey. The Devils defeated the Sabres 3-1. (Photo by Jim McIsaac/Getty Images)