Free agent forward Chris Kunitz has retired after 15 seasons in the National Hockey League. He announced his retirement on Tuesday and will join the Chicago Blackhawks organization as a player development advisor.

Over his 15-year NHL career, Kunitz played for the Atlanta Thrashers, Anaheim Ducks, the Pittsburgh Penguins, the Tampa Bay Lightning and the Chicago Blackhawks. He has put up 268 goals and 351 assists for 619 career points in 1,022 career NHL games. Over his career, he has averaged 16:04 minutes of ice time per game. The NHL named Kunitz an All Star in the 2012-13 season.

Kunitz has a plentiful playoff history. He has 27 goals and 66 assists for 93 points in 178 career NHL playoff games. Three of those 27 goals were game winning goals. Over his playoff career, he has averaged 15:52 minutes of ice time per game.

Kunitz went undrafted, but was signed as a free agent by the Ducks in April 2003, right after his college career came to an end. In his last college season, Kunitz was named Central Collegiate Hockey Association player of the year.

Last season with the Chicago Blackhawks, Kunitz scored five goals and five assists for 10 points in 56 games. He also added 23 minutes in penalties. His possession numbers were 50.9 percent Corsi and a relative Corsi of 0.4.

What This Means For the Future

Kunitz was a veteran forward that knew what it took to win. He wraps up his career with four Stanley Cups as he got one with Anaheim and three with Pittsburgh. The Regina, Saskatchewan native was also a first team in All-Star in 2013. Kunitz also won a gold medal as part of Team Canada in the 2014 Winter Olympics in Sochi, Russia.

He’ll also assist the Rockford IceHogs of the AHL in their player development. He should be a good resource for the young players trying to make their way through the Blackhawks organization. 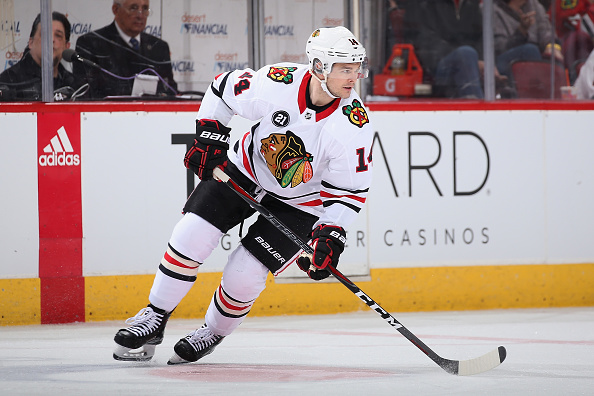 GLENDALE, ARIZONA – MARCH 26: Chris Kunitz #14 of the Chicago Blackhawks in action during the second period of the NHL game against the Arizona Coyotes at Gila River Arena on March 26, 2019 in Glendale, Arizona. (Photo by Christian Petersen/Getty Images)