The Carolina Hurricanes have re-signed free-agent winger Brock McGinn to a two-year contract worth $4.2 million. His salary for the upcoming season will be $1.9 million and $2.3 million for 2020-21. This contract carries him through the 2020-21 season.

CAR and Brock McGinn reached a two-year deal prior to arbitration. $1.9 in Year I, $2.3 in Year II

McGinn has spent his entire four-year career with the Canes. He has put up 36 goals and 40 assists for 76 career points in 240 career games. He was originally drafted in the second round, 47th overall of the 2012 NHL Draft by the Hurricanes.

Last season he scored 10 goals and 16 assists for 26 points. He also added 20 minutes in penalties. During the Stanley Cup Playoffs McGinn put up two goals and four assists for six points in 15 games. His possession numbers were 51.0 percent Corsi and a relative Corsi of -5.1.

The Fergus, Ontario native played four seasons for the Guelph Storm of the OHL. He played for the Charlotte Checkers of the AHL for parts of four seasons. McGinn scored 55 seconds into his NHL debut on October 16, 2015.

McGinn will continue to be known to Canes fan as the guy who picked up the game-winning against the Washington Capitals in game seven during the first round of the 2019 Stanley Cup Playoffs. Four of his five Stanley Cup Playoff points would end up coming during that first-round match-up.

For the Hurricanes, they lock up their final restricted free-agent in McGinn. Over the past two seasons, McGinn has finally come into form putting up 16 goals during the 2017-18 season and 10 goals last year. He plays a gritty game which is perfect for the Hurricanes especially for a guy on the bottom six. Moving forward expect McGinn to be a young piece for the Canes moving forward who could work himself up to a middle-six spot in the line-up. Hopefully McGinn can continue to be a guy who will put up 10-15 goals a year. 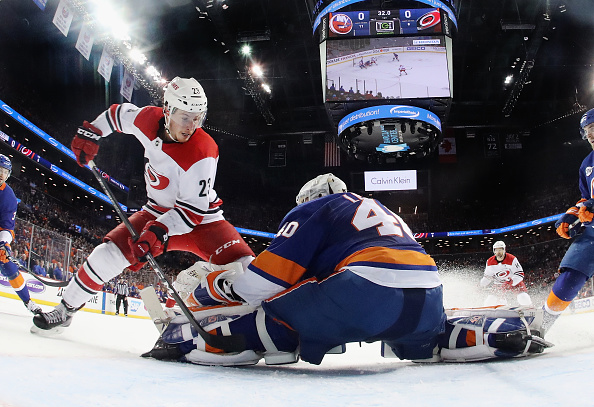 NEW YORK, NEW YORK – APRIL 26: Robin Lehner #40 of the New York Islanders makes the first period save on Brock McGinn #23 of the Carolina Hurricanes in Game One of the Eastern Conference Second Round during the 2019 NHL Stanley Cup Playoffs at the Barclays Center on April 26, 2019 in the Brooklyn borough of New York City. (Photo by Bruce Bennett/Getty Images)