#LAKings have bought out the final 2 years of Dion Phaneuf's contract.

As a result of the Retained Salary trade between the Kings & Sens on Feb 14, 2018 involving Phaneuf, the cap hit resulting from his buyout will be split between LA (75%) and OTT (25%)https://t.co/u0YNYgG1Qy pic.twitter.com/golsF8VigN

Over his 14-year NHL career, Phaneuf has played for the Calgary Flames, Toronto Maple Leafs, Ottawa Senators and Los Angeles Kings. He has put up 137 goals and 357 assists for 494 career points in 1,048 career games. He was originally drafted ninth overall of the 2003 NHL Draft by the Flames. In 55 career Stanley Cup Playoff games, Phaneuf has picked up seven goals and 14 assists for 21 points.

Last season he scored one goal and five assists for six points. He also added 53 minutes in penalties. His possession numbers were 49.1 percent Corsi and a relative Corsi of +1.1.

What’s Next for Dion Phaneuf

Phaneuf will now have to decide if he wants to go out and try to strike a deal with another club or hang up the skates after a 14-year career. There could be some teams interested in the 34-year-old defenceman if he’s looking to continue his playing career.

Despite his numbers dropping drastically last season compared to the 2017-18 season, Phaneuf could be a depth defender moving forward. Not only would he be an asset on the ice be he could prove to be a leader for the younger guys in the locker room. The Edmonton native spent six years as the Leafs captain from 2010-2016 before he was traded to Ottawa. Expect Phaneuf’s leadership to play a big role with his new team next season. 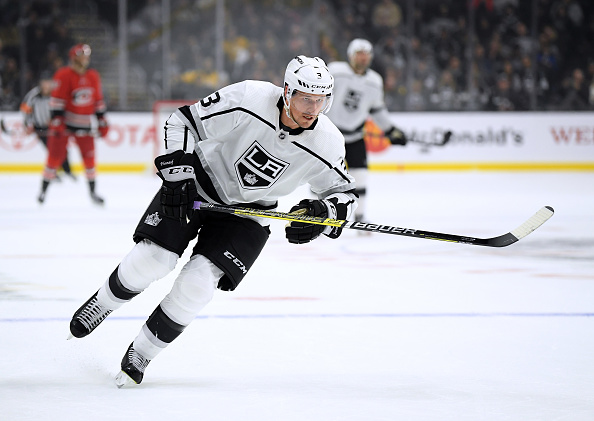 LOS ANGELES, CA – DECEMBER 02: Dion Phaneuf #3 of the Los Angeles Kings skates back for the puck against the Carolina Hurricanes at Staples Center on December 2, 2018 in Los Angeles, California. (Photo by Harry How/Getty Images)