NHL injuries always penetrate most post-playoff conversation. After Friday’s list of the Boston Bruins‘ injuries surfaced, so do questions of NHL player’s safety. NHL injuries are always the big news after the Stanley Cup is raised. The most shocking listed is Jake DeBrusk’s concussion, likely suffered in Game 2 of the First Round one against the Toronto Maple Leafs. In the race for Lord Stanley, players and team staff continue to turn a dangerous blind eye at player safety. This trend isn’t new and it needs to change.

In order to understand how the NHL has arrived in a slippery conversation about injuries, one has to understand its history. Littered with stick violence and lack of protective gear, hockey’s past and present continue to toe the line of acceptable safety.

Founded in November of 1917, the NHL has skated past its centennial with now 31 teams and a 32nd on the way. A league that once consisted of six teams has grown to unite fans across the world. Clothing companies now boast slogans like “Make Hockey Violent Again” and plaster images of the best hits on screen-printed t-shirts.

However, before the NHL was created, hockey resembled a clan sport, according to this New York Times article. Comprised of English-Canadian and French-Canadian rugby players, each small hockey team carried the heritage of it’s player’s ancestors. Clan mentalities have taken over teams, increasing retaliation injuries. DeBrusk’s concussion-causing injury from Nazem Kadri was a direct retaliation.

In addition to heightened violence, safety measures haven’t been adequately in place for most of the NHL’s history. Helmets weren’t even mandated for use until 1979, more than 60 years into the league’s tenure. In addition, it was another 37 years before the NHL added designated concussion spotters. The NHL’s lackadaisical attitude about safety allows fans, coaches, staff, and players to mimic that behavior.

Judging from the list above, the Bruins laid everything out on the line. From groin injuries to the core of this article, DeBrusk’s concussion, the Bruins were going to play for their city no matter what. In the comments below, some fans list these injuries as “excuses” for their Game 7 loss, instead of humanizing the players. NHL on NBC Sports posted on Instagram that captain Zdeno Chara had multiple jaw fractures which were held together by two plates. Chara’s mouth, wired shut and pins placed in his jaw, required a mostly liquid diet. To conclude the post, they say “played in games 5, 6 and 7.” Glamour and pride become associated with the pain threshold of athletes. This phenomenon is meant to drive eyes to a page or put butts in seats.

We’ve seen players step up and compete at an elite level post-concussion or traumatic injury. There’s no question about that. Take Sidney Crosby. He has had four reported concussions, missing over 100 games to recover. He still boasts three Stanley Cup titles. Beyond the glory of a rare success are countless stories of trauma and tragedy. Both examples are linked to the unspoken burden of a “hockey guy.”

The eighth anniversary of Derek Boogaard‘s death fell on May 13, 2019. Boogaard, one of the league’s best enforcers, spent most of his career with the Minnesota Wild. His untimely death, is officially a drug overdose, likely brought on by CTE. Chronic traumatic encephalopathy (CTE) is a brain condition, diagnosed post-mortem. Caused by continuous blows to the head and insufficient healing time, CTE causes behavioral, personality and memory alterations that can completely alter the person suffering. Boogaard’s tragic passing should serve as a cautionary tale to all of the NHL, and professional sporting leagues, to provide more resources and limitations for players at higher concussion risk.

Another chilling story was told by The Player’s Tribune, by the patient himself, Clint Malarchuk. Malarchuk credits the bullet in his skull at age 47 to the night of March 22, 1989.

Starting in net for the Buffalo Sabres, Malarchuk suffered the grisliest injury in recent NHL history, a skate to the throat. Blood spurted five feet from his neck as he remembered a notion drilled into him since peewee league, “If you get hurt, don’t lay there on the ice like a weakling. Get up and go. Get yourself off that ice. Show that you’re tough.” Ten days after his carotid artery cut and his jugular vein partially sliced, he was back on the ice.

This costly decision which would give Malarchuk with PTSD for the rest of his life, leading to a self-inflicted gunshot. It led straight back to the peewee leagues. “Show that you’re tough.”

In addition to the toughness ingrained in each player’s mentality, the league continues to push aside the importance of player’s injuries, notably calling injuries ‘upper body’ or ‘lower body.’ There’s no confirmed reason as to why this occurs. However, one theory is that if the opposing team knows the exact spot of a player’s injury, they will try to aggravate it upon their return. One can theorize that the location of the injury isn’t important, only the disclosed healing time. Without full disclosure of the injury to the public, the league is sending a message that the injury isn’t a big deal. It’s here, it’s there, it’s whatever. They’ll heal, bottom line. Unfortunately, with a constant battery of expectation – that healing may not last, until it’s too late.

What Needs to Change

The topic of injury transparency will continue to persist in the professional sports community, especially in the NHL. However, there are fundamental changes the league can make. These should start at the very beginning of the player’s careers so the conversation around injuries.

Junior league coaches need to hold their players accountable for their bodies at their best and their worst. The mentality Malarchuk presented, while tough, is unstable. Don’t hit the ice less than two weeks after almost dying on the same hallowed ground. Shift the conversation from strength to stamina. Encourage bodily and mental health, the characteristics we admire in the sport, grit, and honor, will remain.

Additionally, team staff needs to reconsider the need for certain players based on their injury, not the other way around. Continuing to play on an injury, especially a concussion is unsafe. It can have devastating effects such as mental disorders and continued and more frequent concussions. 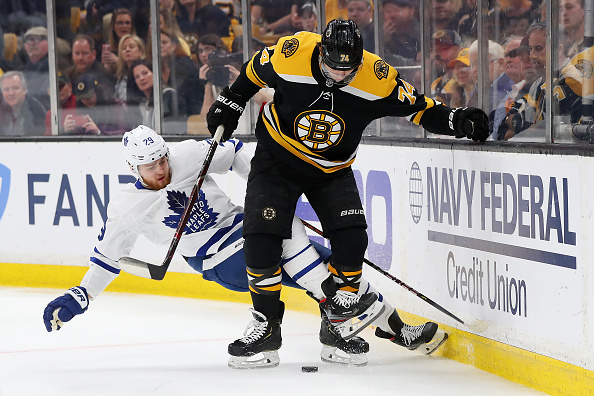 BOSTON, MASSACHUSETTS – APRIL 19: William Nylander #29 of the Toronto Maple Leafs gets tripped up in the skates of Jake DeBrusk #74 of the Boston Bruins during the first period of Game Five of the Eastern Conference First Round during the 2019 NHL Stanley Cup Playoffs at TD Garden on April 19, 2019 in Boston, Massachusetts. (Photo by Maddie Meyer/Getty Images)