The Dallas Stars have re-signed free agent defenceman Roman Polak to a one-year contract worth $1.75 million. This contract carries him through the 2019-202 season.

Over his 13 -year NHL career Polak has played for the St. Louis Blues, Toronto Maple Leafs, San Jose Sharks and Dallas Stars. He has put up 26 goals and 110 assists for 136 career points in 765 career games. Polak has also picked up four assists in 71 career Stanley Cup games. He was originally drafted in the sixth round, 180th overall of the 2004 NHL Draft by the Blues.

In his only year with the Stars, Polak scored one goal and eight assists for 9 points. He also added 69 minutes in penalties. His possession numbers were 43.7 percent Corsi and a relative Corsi of -6.7.

“Roman personifies what it means to be a professional and his mentorship to our younger players proved to be invaluable to our organization,” said general manager Jim Nill to the media. “His team-first attitude and physical style of play is endearing to both his teammates and the coaching staff, and we’re thrilled to have him back.”

What This Means for the Future of Roman Polak

Polak is a veteran defenceman who won’t produce offensively but brings a physical side to his game when on the ice. Despite the fact that the game is getting faster and guys like Polak are being phased out he still played a role on the Stars.

He’s part of a good young defensive group with John Klingberg, Esa Lindell and Miro Heiskanen. The others provide offence while Polak provides the physical edge.

He can prove to be a bottom six guy who can be a depth guy moving forward. The 33-year-old defenceman is not afraid to get down and block shots as he was second on the Stars this year with 152 blocked shots. Don’t be surprised to see Polak throwing his big body around next season. He looks to continue his role on the third pairing with Dallas. 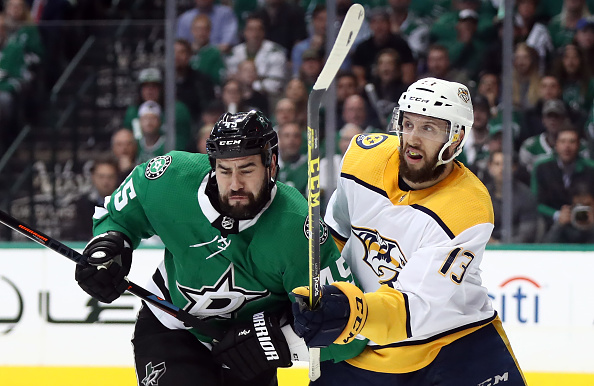 DALLAS, TEXAS – APRIL 22: Roman Polak #45 of the Dallas Stars and Nick Bonino #13 of the Nashville Predators in the second period of Game Six of the Western Conference First Round during the 2019 Stanley Cup Playoffs at American Airlines Center on April 22, 2019 in Dallas, Texas. (Photo by Ronald Martinez/Getty Images)