The Colorado Avalanche had truly a successful season. They made it interesting with yet another late push to punch their ticket to the Stanley Cup playoffs. With more than four points out, they buckled down and went on an 8-0-2 run with 11 games remaining in the regular season. That secured them the second wild-card spot in the Western Conference. The Avs made sure to make their presence felt. Now they look ahead to the free agency with a ton of salary cap space and the potential. the Colorado Avalanche free agent strategy is looking very interesting, but they have to think about it first.

It seems as the Avs have reached their potential. They might be looking at adding more this off-season. After finishing as No. 8 team in the Western Conference, the Avalanche came awfully close to making it to the Western Conference Final. There is a feeling we haven’t heard from the Avs for last time. After that Game 7 loss to the San Jose Sharks, a window appears to be widening a bit for Colorado.

One of the main problems for the Avalanche has been their one-punch attack. Head coach Jared Bednar had to rely so much on his top line of Gabriel Landeskog, Nathan MacKinnon, and Mikko Rantanen. When these guys went in slumps or ended up injured, the Avs had a serious obstacle. One of the Colorado Avalanche free agent targets will be a prominent player in Artemi Panarin.

Avs have as much to spend in free agency as any team. If a guy like Panarin chooses Florida over Avs, it’ll be more of a pure financial decision. And that’s fine. Avs will be there pitching him though

Now that would provide a spark for the Avalanche moving forward. You have pieces like MacKinnon and Rantanen. Adding Panarin after yet another wonderful campaign would be huge. After almost making the Western Conference Final a few weeks ago, that would certainly delight the Avalanche fanbase.

There might be a few problems with the potential signing of Panarin. Would the Avalanche want to commit to the Russian elite player for that long? Are they willing to pay him what he asks? Even though they would, those questions are always concerning. However, Panarin might not have Colorado as his top destination come July 1. Nevertheless, this may change as anything is possible and the Avs seem to have a better team than the Florida Panthers, who are also trying to land Panarin. At least momentarily. The Russian scorer may be a long shot for the Avalanche.

Kevin Hayes has been rumored with the move to Colorado as well. He’s a different type of player than Panarin, but that might be just perfect as well. Of course, Panarin would draw more of an attention in Colorado than Hayes. However, he might come cheaper and answer the Avalanche’s problems more than Panarin.

Hayes can play at the centre position as well as at the winger position. His versatility might be very useful for the Avalanche down the road. Their current top pivot is MacKinnon and their present second-best centre is Carl Soderberg. Hayes would be an upgrade as the No. 2 centre.

The 27-year-old forward had a solid season with 55 points in the regular season and then another three points in the playoffs. No one is saying that the Avalanche should favor Hayes above Panarin, but a player like Hayes might address their concerns in a bit better and appropriate way.

This name hasn’t been widely rumored with a move to Colorado in a month, but it would be definitely an interesting choice. After looking at former New York Rangers forward in Hayes, let’s take a look at Mats Zuccarello. Both Hayes and Zuccarello started the last season in New York but finished it in different destinations.

Hayes is certainly a more versatile player than Zuccarello, who almost exclusively plays as the right winger. After playing in just 48 games during the regular campaign, where he collected 38 points, the Norwegian winger impressed in the playoffs. He featured with 11 points in 13 playoff games with the Dallas Stars. Zuccarello has shown that he still has it and can be a very worthy player for his team.

Comparing Panarin with Hayes and Zuccarello respectively, Zuccarello is already 31-year-old, while Hayes is 27-year-old like Panarin. With the 32nd birthday coming in September for  Zuccarello, he should not be demanding a long seven-year contract. That’s why he would be probably one of the most financially profitable signings for the Avalanche in the free agency. After such a great season for him, he has some gas left in the tank for the upcoming years. Colorado would use his experience and abilities for sure.

The Colorado Avalanche have their sights set at the free agency. As of now, they have approximately $37 million of the salary cap space left. That’s a ton of money to work with. They have to re-sign some of their restricted free agents, like Rantanen, who is one of their main stars. Alexander Kerfoot, J.T. Compher, Nikita Zadorov also need to get deals done. The Avs have to find their new backup goaltender as well.

Committing to the player long-term shouldn’t be such a big problem for the Avalanche either. Next summer, the buyout of Brooks Orpik and the contracts of Mark Barberio and  Soderberg will expire. That would free up more than another $7 million in the salary cap space. Plus, MacKinnon is signed for a bargain deal worth $6.3 million until 2023.

“We see positions of need, of what we’re looking to do. There are a few guys that we’re gonna want to talk to if they become available. We’ll be more aggressive this year,” said the general manager Joe Sakic after the season ended for the Avalanche. The Colorado Avalanche free agent outlook is going to be interesting. They have the cap space left and the requirement to make the team more than just one-line firepower. 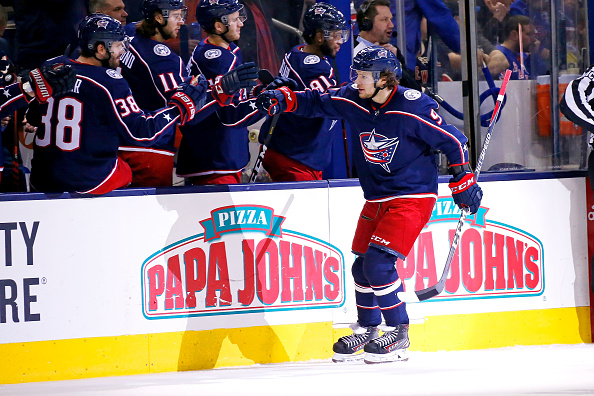 COLUMBUS, OH – JANUARY 13: Artemi Panarin #9 of the Columbus Blue Jackets is congratulated by his teammates after scoring a goal during the first period of the game against the New York Rangers on January 13, 2019 at Nationwide Arena in Columbus, Ohio. (Photo by Kirk Irwin/Getty Images)