Cody Ceci has been a polarizing figure for the Ottawa Senators. No doubt his off-ice character is great, yet his on-ice game has left something to be desired. For a long time fans would say he is still young, he can still develop, and his results are not that bad. However, now it seems most have accepted that Cody Ceci is in way over his head.

There is still a thought out there that there is an NHL player left in him. After all, when given a little bit of time he does show some flashes. He can jump up in the rush to create problems, as well as hitting some stretch passes. All of this leads to believe that he may have a lesser role but still in the NHL, here is why that shouldn’t be in Ottawa.

Sens Need To Move On From Cody Ceci

First, let’s take a look at Cody Ceci’s results. Using Evolving Hockey’s RAPM Chart’s we can see that Ceci has struggled in every single aspect of the game. 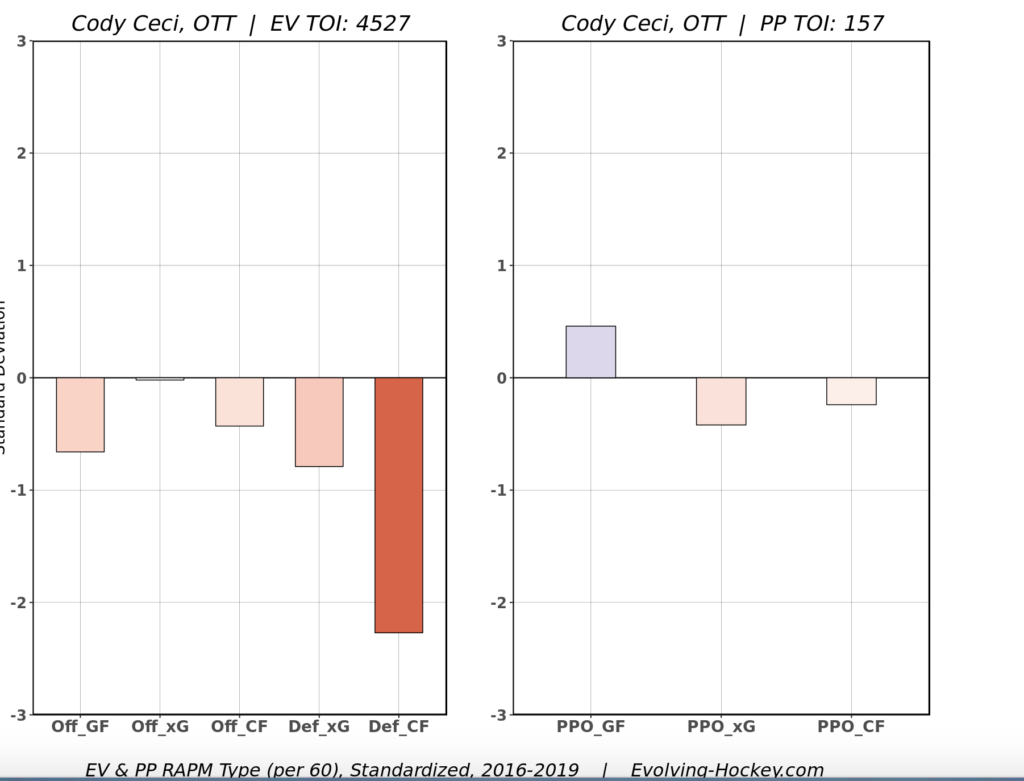 In fact, according to Natural Statrick, 204 defencemen have played 1500 minutes or more in the past three years. Cody Ceci ranks 201st in CF% and 203rd in CA/60 in that time. He also ranks 200th in xGF% and 187th in xGA/60. Simply put, he has been one of the worst regular defenders of the past three years. It should come as no surprise that the team has struggled when he has been the main player that has been relied on defensively.

We have seen his overall rates have been horrible beyond belief but does his shot location look any better? From HockeyViz.com, here is what the Sens allow in terms of shots against when Cody Ceci is on the ice vs off the ice. 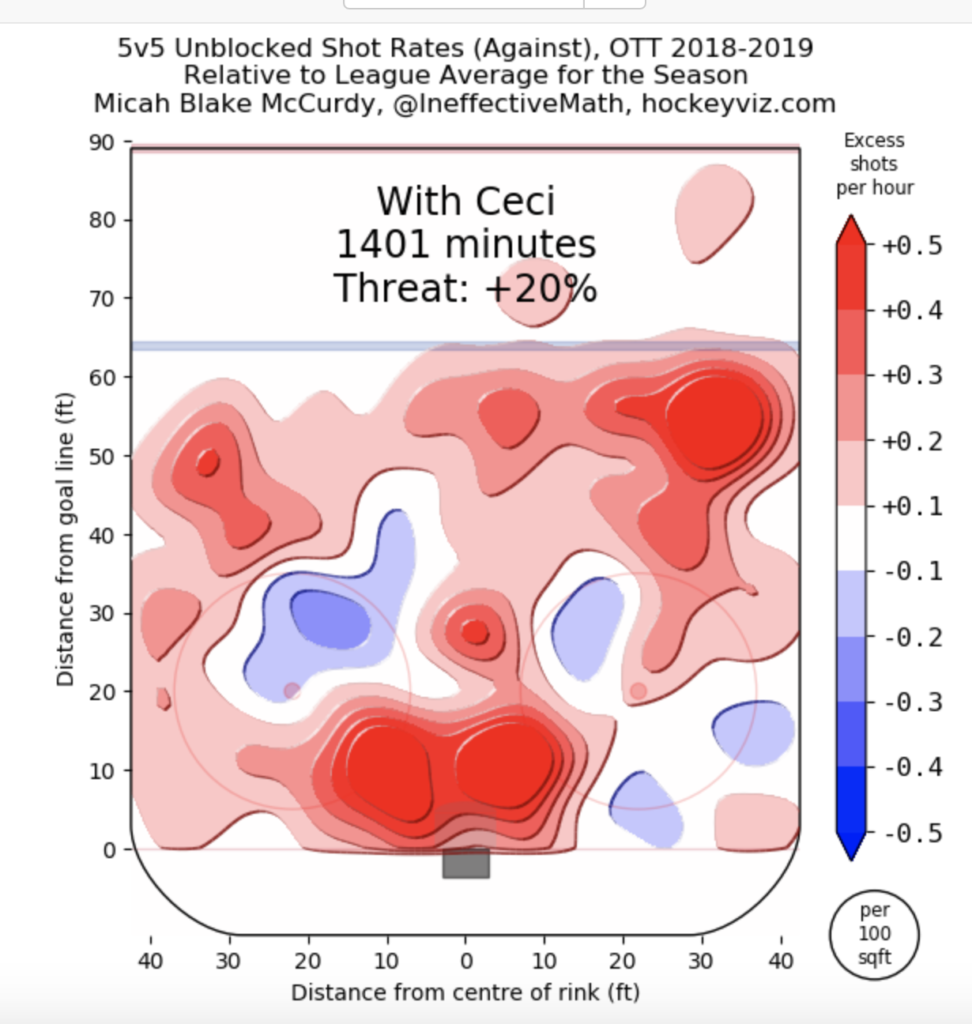 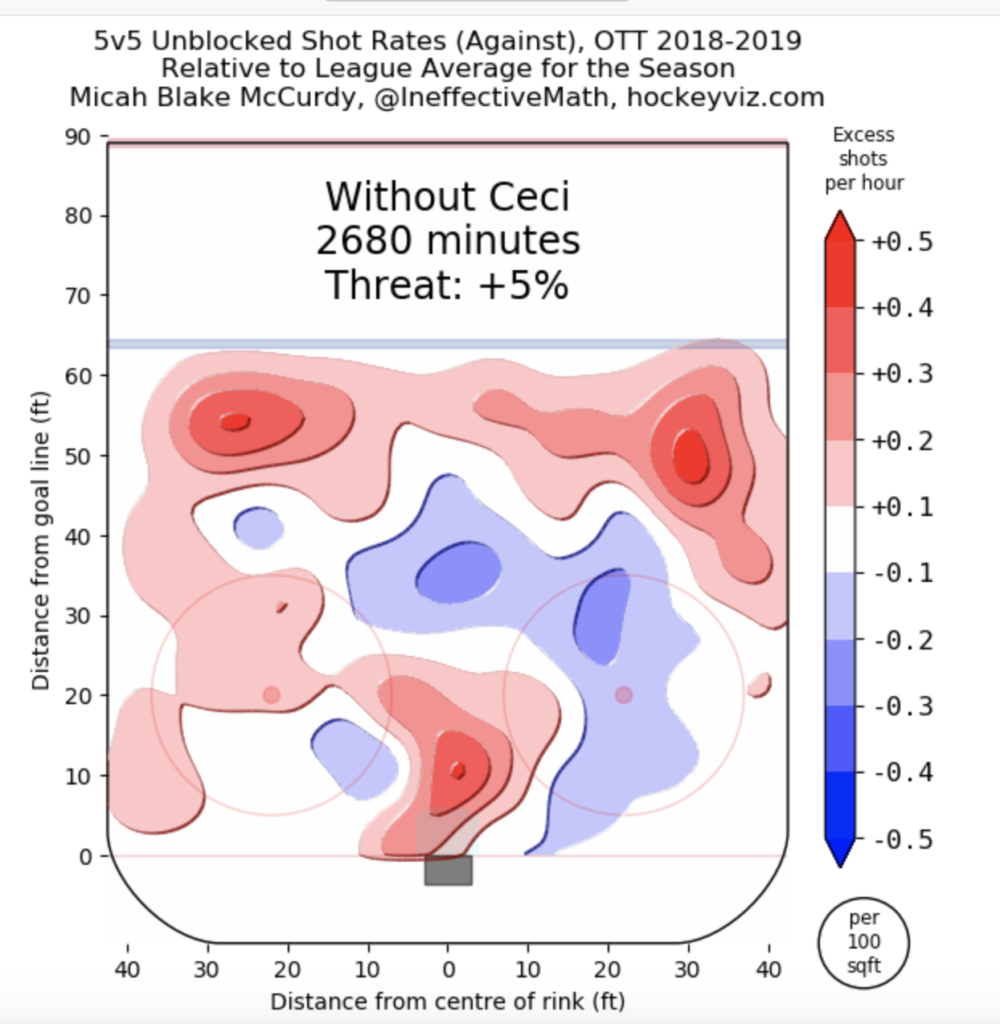 As you can see, neither is great. However, one is much worse than the other. The Sens bleed shots from everywhere when Ceci is on the ice. The worst part is, the massive red spot in the slot. This means that when Ceci is on the Sens give up tons of high danger chances. His play is just unacceptable.

So, what about the eye test? Sometimes in hockey stats don’t show everything. While that is often very overrated, we can take a look to see.

Welcome to the NHL, Daccord. Oh btw don’t expect you team to help you in any way… #Sabres take a 4-2 lead over #GoSensGo pic.twitter.com/SDForVBpoc

Cody Ceci is one of the toughest players to watch on the ice. Time and time again he gets caught doing nothing but watching the puck. In both clips above he is completely lost and has no idea what his surroundings look like. He often loses his man out front while just eyeing the puck the entire time and it is an issue that has never been fixed.

Cody Ceci is a bad, bad hockey player. Andy also probably should have had a piece of this but didn’t look like he was ready for it. Either way, Leafs tie it 2-2. pic.twitter.com/GX28gqmyNP

Stone with a rare turnover, Ceci with maybe not such a rare one.. Point shot goes in. #Sens #Sabres up 1-0. pic.twitter.com/eiPnCmQVZB

These two turnovers are not uncommon things for Ceci either. His puck decision skills under pressure are absolutely horrid. Instead of trying to stay calm and find an opening he will blindly fire the puck away and hope for the best. Often times this leads to a turnover and even a goal against.

The Good With Cody Ceci

Despite the horrid defensive play, there are some bright moments for Ceci.

Ryan tips an absolute blast from Ceci into the net. #GoSensGo beat the #SJSharks 6-2! pic.twitter.com/3LAJ8TzxSw

Ceci started to jump up more in the rush last season and it was effective. There are still offensive decisions that leave you scratching your head. However, as the clips above show, there are also times where he puts his head up and gets a good shot on net. Other times he makes a decent pass.

Where he really excels though is when he is allowed to jump up in the rush as an extra body. The second clip shows him rushing it then dishing it off and crashing hard to the net. That is exactly the kind of thing he needs to do if he wants to stay around.

The big question becomes, can he change? There are some signs of life as an offensive-minded defenseman, however, there are also lots of troublesome moments too. It seems very reasonable to suggest that Ceci could find a spot as a more useful NHL player.

However, this player can’t be a shutdown role in the top four of a team. He is brutal in his own end and needs to work on it if he even wants to become a bottom role guy. But, if he can work on finding his game in his own end, his talents of rushing it up the ice could make him a useful third pair guy.

This third pair role would be a super sheltered role where the goal is to not start in his own end much and play more against bottom lines. When he plays against slower or less skilled opponents his game starts to show a bit more. This is true for everyone obviously, but at times Ceci looks like he knows what he is doing out there. Moving him into a sheltered role could do him wonders.

However, if this transformation does happen it likely will not be with the Ottawa Senators. A huge reason the Sens need to move on from Cody Ceci is that they have invested too much already. The Sens have promoted him as a legit top line shutdown guy for years now and have refused to trade him for many big names in the past.

Unfortunately, this needs to be counted as a sunk cost. The Sens need to realize he’s not what they hoped. It looks like they may not want to do that and that is why they need to move on. It may be better for the length of Ceci’s career and the Sens, in general, to move on.

If Ceci does turn into a more offensive-minded sheltered guy, this also doesn’t fit Ottawa’s needs. The Sens already have Thomas Chabot and Erik Brannstrom who will look to fuel the offence for years to come. In terms of bottom pair guys, the Sens already have a logjam down there with guys like Ben Harpur and Christian Jaros among others fighting for spots. Adding another player to that list doesn’t make sense.

All of this is why the Sens finally need to cut their losses and trade the pending RFA for whatever they can. As seen above, doubling down on another big payday would be a huge mistake for Ottawa.