It´s a time for the Eastern Conference final. It’ll be the Boston Bruins vs Carolina Hurricanes. in a matchup not expected by many hockey fans. Not only is it a reality, but it’s also about the dream for one team. Both teams are four games away from a berth in the Stanley Cup Final. It has come down to just two teams from the 16-team Eastern Conference. Here’s a look at it in our series preview.

Battle Of The Experience Edges

At first glance, Boston should have more experience. However, this is the furthest they’ve been in six years. The Hurricanes on the other side haven’t made it to the playoffs for 10 straight years. They have returned to the Eastern Conference final in their first post-season appearance in a decade. The Hurricanes ended up getting swept in four games by the Pittsburgh Penguins in that round.

In the second round in 2009, the Hurricanes beat the Bruins. Only David Krejci, Patrice Bergeron, and Zdeno Chara remember the moment when Scott Walker broke the Bruins hearts in overtime of Game 7 at TD Garden. Tuukka Rask was at the bench that night. No current player on the Hurricanes team remembers that night. Well, of course, current Head coach Rod Brind’Amour does.

For the Hurricanes that year, Dennis Seidenberg suited up for them. Two years later, the German defencemen won the Stanley Cup with the Bruins. Carolina earned 19 points less in the regular season than Boston that year. After losing Game 1 at TD Garden, Carolina won three straight. The Bruins responded with huge two wins but fell short in overtime of home Game 7.

It’s been 10 years now, but Bruins fans and three of their players didn’t forget. In between that time, the Bruins made it to the Stanley Cup final twice, while Carolina failed to make the playoffs.

In the first round, Boston faced the Toronto Maple Leafs. The Bruins beat the youth and speed with their veteran leadership and experience. In the second round versus the Columbus Blue Jackets, it was the same story. The Bruins required seven and six games, respectively, to beat their two playoff opponents. However, at the end of the day, they did show up their experience edge.

When facing the Hurricanes, the Bruins won’t be surprised by seeing a speedy team trying to sieize their chance. Boston has already been there before and have succeeded. They will try to keep it going for a third time.

Carolina has followed a similar path this post-season. It happened in their first-round series versus the Washington Capitals, when they seemingly stood no chance. Trailing practically throughout the whole series, the Hurricanes refused to go away as they prevailed in Game 7 on the road in double overtime.

In the second round versus the New York Islanders, the was little drama. Carolina got a munch-needed sweep to heal their wounded bodies and to get some more confidence. The Canes are ready to face another long series against the big and strong opponent. They are ready to succeed again.

Carolina Hurricanes Relying On Their Defence

The most productive player from the Hurricanes is their star defenceman, Jaccob Slavin. He has recorded 11 points so far in the playoffs. His three assists in Game 7 was a thing of beauty. However, its not just about Slavin. Dougie Hamilton has had seven points, Justin Faulk had six points as well as Brett Pesce. This top-four formation for the Hurricanes has been playing lights out for Brind’Amour.

Losing Trevor van Riemsdyk will certainly hurt the Hurricanes because of the experience the American blueliner has brought to the lineup. Calvin de Haan will be asked to chew up those minutes reserved for a veteran defenceman. The Hurricanes have given up only four goals in their second-round series against the Islanders.

In their three home games against the Capitals, the Canes gave up just three goals. Carolina’s defence was the key. In the first two road games in the first round, the Canes have scored five goals. They found themselves 0-2 down in the series. Versus the Islanders, Carolina has scored three goals in their first two games on the road. And they had a 2-0 series lead and swept the Isles.

While the most productive player for the Hurricanes is a defenceman, it’s not the same among the Bruins. Brad Marchand leads them with 13 points, while David Pastrnak has had 11 points so far in 13 playoff games. The most important thing for the Bruins is that those key players keep producing.

Pastrnak played poorly at the beginning of the playoffs, but in the last few games, his game seemed to be on again. His skating was there and he was able to limit turnovers. Top-line production will always be a key for the Bruins. Pastrnak got the game-winner in Game 5 and Bergeron got the game-winner in Game 4 versus the Blue Jackets. They just need their power play to start rocking again after they went 3-for-21 against Columbus.

The second line was led by Krejci, who has found some chemistry lately. He was centering that line which has 10 points, Jake Debrusk has recorded a point in three of his last four games. David Backes was inserted on that second line for Game 4 in Columbus is on the three-game point streak.

Opportunity Lying Ahead For Boston Bruins and Carolina Hurricanes

Both teams have some strengths, but both teams have some issues. However, the opportunity looms large for either side in this series. Honestly, the Hurricanes would have never believed they would make it to the Eastern Conference final before the season started. On the other hand, the Bruins wouldn’t believe it either. They lost in clear fashion against the Tampa Bay Lightning in the second round last year.

Seeing how much Tampa has even improved during this regular season, the Bruins knew it wasn’t going to be easy getting beyond the second round. However, the playoffs are different and the Lightning got swept in the first round by the Blue Jackets. Then Boston handled the Blue Jackets in six games.

Underestimating Carolina would be a huge mistake for Boston, but it overcame the temptation versus Columbus. The Hurricanes aren’t planning rolling over for the Bruins. At this stage, for both teams, the Stanley Cup is the only goal.

The Boston Bruins have won 12 of their last 18 head-to-head meetings with the Carolina Hurricanes. In this last 18 games, 10 went to overtime. The regular season is not the most telling thing, but it could reveal a trend. The Hurricanes have always been able to make the Bruins dig hard to win their head-to-head games in the last few years.

One would expect the huge battle going on in the Eastern Conference final between these two teams. With the CF% at 55.62 at even-strength, the Hurricanes lead the playoffs in that department. They have xGF% at 53,80. On the other note, the Bruins have the CF% at 52.03 at even-strength, while the xGF% is at 54.15. The Hurricanes will certainly like to create more, but the Bruins are slightly more effective.

The Boston Bruins in six games over the Carolina Hurricanes. 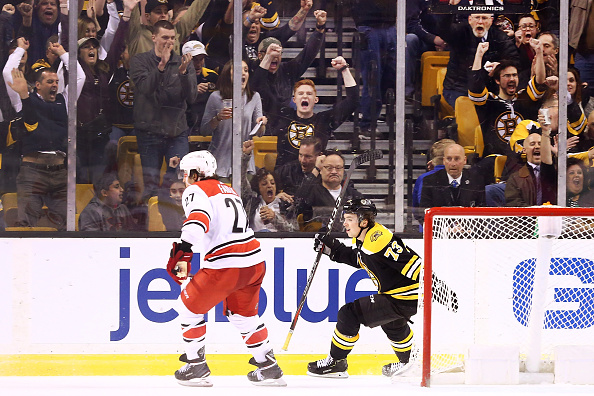 BOSTON, MA – FEBRUARY 27: Charlie McAvoy #73 of the Boston Bruins reacts after scoring the game-winning goal in overtime against the Carolina Hurricanes at TD Garden on February 27, 2018 in Boston, Massachusetts. NOTE TO USER: User expressly acknowledges and agrees that, by downloading and or using this photograph, User is consenting to the terms and conditions of the Getty Images License Agreement. (Photo by Adam Glanzman/Getty Images)