The St. Louis Blues find themselves with a two to one series lead over the Dallas Stars thanks to a wild 4-3 victory in Game 3. Pat Maroon was the Blues hero on the night, scoring the game-winning goal with 1:38 remaining in regulation. Jordan Binnington was solid, making 28 saves on 31 shots to secure the victory. After missing out on last year’s Stanley Cup Playoffs, St. Louis is vying for a place in the Western Conference final for the first time since 2016.

Despite the 2-1 series deficit, the Stars have been a more than an adequate match for the Blues. Through three games, both teams have scored exactly nine goals apiece. Advertised heading into Game 1 as a battle between two closely matched teams, the series has been a game of inches. Here are some of the reasons St. Louis currently holds the advantage over Dallas in round two:

Coming off a scrappy opening round series win over Connor Hellebuyck and the Winnipeg Jets, Binnington appeared to be coming back down to earth. Questions over the Calder Trophy-nominated youngster’s ability to match his regular season play in the post-season began to arise.

Any doubts were dismissed following game one of the second round, where Binnington stopped 27 of the 29 shots he faced. As analytics experts “The Point Hockey” noted, Binnington truly was the sole difference in game one:

How good was Jordan Binnington? Take a look at the slot shots in this game. What a performance! The Blues did double the Stars in rush chances and scored twice off the rush – that was the difference. St. Louis takes Game 1. #GoStars #STLBlues #StanleyCup pic.twitter.com/yC94P3V5wo

Overall in the first three games, Binnington has outperformed Stars netminder Ben Bishop. While Bishop’s 32 save performance in Game 2 was enough for a Dallas win, Binnington found a way to make one more save than Bishop in Game 3. Binnington’s .915 SV% trumps Bishop’s .898 SV% through three games.

The goaltending matchup was a key factor discussed heading into this series. With this in mind, St. Louis’ 2-1 series lead should come as no surprise with the battle between the pipes in their favor so far.

Much like goaltending, special teams was a talking point heading into Game 1. In this instance, it has been the Stars who have the advantage in this department. Dallas has converted 2-of-8 PP opportunities, while the Blues are 1-for-9 on the man advantage. Overall, special teams goals are 3-1 for Dallas, thanks to a Game 3 shorthanded goal by Andrew Cogliano.

Through nine post-season games, the Stars penalty kill has killed off 23 out of the 24 PP’s they have faced. With Cogliano’s shorthanded tally, they have scored as many goals as they have allowed while shorthanded to date. While Dallas’ power play has been a modest 20% through the first two rounds, their lethal PK has given them the edge in the special teams’ department once again so far in Round 2.

With lots of talk about the dominance of the Stars trio of Tyler Seguin, Jamie Benn, and Alexander Radulov at 5v5 in Round 1, St. Louis has done well maintaining Dallas’ big line at even strength. If Dallas can get their top players firing once again, their PK should help ensure they make this a series. Conversely, if the Blues find a way to break through on the man advantage, consider it advantage St. Louis going forward.

One of the biggest reasons for St. Louis advancing past Round 1 was their success away from home. In fact, the Blues were a perfect 3-0 in Winnipeg against the Jets. The Blues extended that unbeaten streak on the road to 4-0 with the win in Dallas in Game 3.

With Game 4 again set to take place at the Stars American Airlines Center, the Blues will be aiming to spoil the party in the opponents building for a fifth straight post-season game.

On the other side of the equation, Dallas will be hoping their own first-round history repeats itself. Having found themselves down 2-1 to Nashville in Round 1, the Stars took the next three games winning the series in six. For both teams, it’s clear Game 4 will be key to getting the job done.

We had this series going the distance from the start and nothing through three games has led us to believe otherwise. Something tells us we haven’t heard the last of the Seguin-Benn-Radulov trio this post-season. 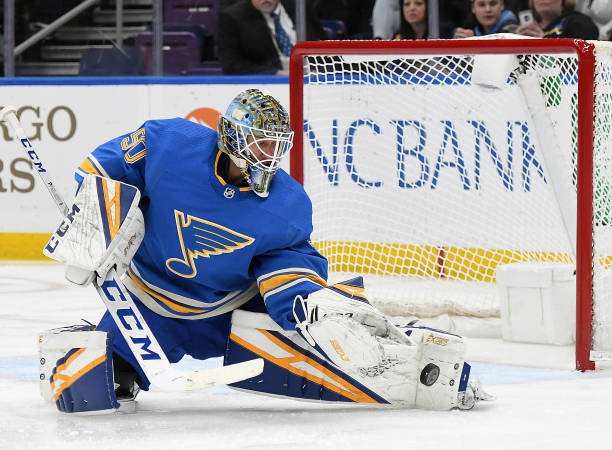 ST. LOUIS, MO. – FEBRUARY 09: St. Louis Blues goalie Jordan Binnington (50) makes a glove save during an NHL game between the Nashville Predators and the Blues on February 09, 2019, at Enterprise Center. (Photo by Keith Gillett/Icon Sportswire via Getty Images)