The Dallas Stars organization is having a solid week. On Monday, in a dramatic Game 6, Stars defenseman John Klingberg buried the game-winner in overtime that would send Dallas to the second round. Wednesday night would prove to be equally as rewarding for one of the Stars’ top prospects. Forward Tye Felhaber of the Ottawa 67’s in the OHL would score the overtime game-winner in Game 4 of the OHL Eastern Conference Final against the Oshawa Generals. Felhaber has been the anchor for a 67’s team that dominated the OHL regular season. Ottawa’s dominance has continued in the playoffs. The 67’s are 12-0 in the postseason, having swept all three of their opponents.

So much for the “culture of mediocrity” that Dallas Stars head coach Jim Montgomery once spoke of. With a plethora of top prospects, it is Tye Felhaber who is leading the pack, showcasing scoring abilities that will one day be of important use for the Dallas Stars.

The road to the NHL for Tye Felhaber was not a guaranteed one. While his speed and vision to create scoring opportunities were enviable qualities, Felhaber did not live up to expectations after being drafted by the Saginaw Spirit.

After two seasons with the Spirit he was shipped to the Ottawa 67’s. He struggled to find offensive production, only generating 13 goals and 10 assists in his first 35 games with Ottawa. NHL scouts noticed the dropoff after his inaugural OHL seasons, resulting in Felhaber being undrafted. While disappointed, it served as motivation for Felhaber to become a more complete hockey player.

“At 17 and 18, it was tough not getting drafted and not having much success,” Felhaber said. “I think that halfway through last season I picked it up. That’s really when I made up my mind that this is what I want to do for my career.”

The long hours practicing on his parents’ backyard rink finally paid off for the Pembroke, Ontario native. Last season, Felhaber scored a career-high 31 goals and 39 assists for the 67’s. Those suprassed his previous targets while playing in Saginaw. But it would be this year, in his final season of OHL eligibility, where Felhaber would become a prolific prospect. He smashed his previous personal bests, recording 59 goals and 50 assists in a remarkable 68 games played. Finishing the season with 109 points would not only make Felhaber the 67’s leading scorer but third in scoring for the entire OHL.

Once a player that was overlooked in consecutive drafts, teams were showing considerable interest in young Tye. In the end, Dallas would sign Felhaber to a three-year, entry-level contract. This is paving the way for the youngster to achieve his NHL dream.

For Felhaber, the barrage of goal scoring had occurred on an Ottawa 67’s team that finished the regular season atop the OHL standings. Felhaber has benefited from playing on the same line as Austen Keating and Marco Rossi. Those two players are proficient at setting Tye up for goals.

“We have that linemate chemistry where Austin is the passer, Marco’s the all-around guy and I’m more of the shooter and scorer. They both do a really good job looking for me,” states Felhaber.

The steady offensive production for Felhaber has continued in Ottawa’s postseason run. Felhaber leads the 67’s in playoff scoring with 21 points (11 goals, 10 assists). The Hamilton Bulldogs, Sudbury Wolves, and most recently the Oshawa Generals, have all experienced the immense burden of trying to slow down the speed of Felhaber.

No instance greater than on Wednesday’s Game 4. Down 0-3, the Generals needed to win on home ice to force a Game 5 back in Ottawa. With Tyler Tullio‘s second period goal, coupled with brilliant goaltending from Boston Bruins prospect Kevin Keyser, Oshawa was poised to continue the series. Until the Tye Felhaber Show happened.

With 33 seconds left in regulation, Felhaber would tie the game. The talented forward would bury the series winner 26 seconds into overtime. The 67s wound up sweeping the Oshawa Generals and advancing to the OHL Championship. A special moment for the young man who was once an afterthought by many professional scouts.

With the win on Wednesday, the 67’s made postseason history. The became the first team since the 1988 Windsor Spitfires to go 12-0 in the playoffs. To sweep the Oshawa Generals, a team that had the highest winning percentage since the trade deadline demonstrates the viability and durability of the Ottawa 67’s.

Felhaber isn’t concerned about what lies ahead as a member of the Stars. His sole focus is helping the 67’s to not only win the Ross Robertson Trophy and the illustrious Memorial Cup. It’s hard to not put it past Ottawa. They’ve been dominant throughout the regular season and now await a matchup between either the Saginaw or the Guelph Storm. Two teams that the 67’s have a winning record against this past season. Like the previous three series, preparation and execution are critical in order for Ottawa to have success, according to Tye.

“Everybody (has been) buying into our systems. We have a game plan for every team we play and we know (what to do) when we study the other team” Felhaber said.

As Felhaber prepares for his first (and last) OHL Championship, he is excited about the opportunity to anchor the prolific offence of this team. Battling through the perseverance was worth it for young Tye. He has a chance to help lead the Ottawa 67’s to their first Ross Robertson Cup since 2001.

“As an overage player, it’s your last chance to win. For us, as players, it’s really exciting.” said Felhaber. 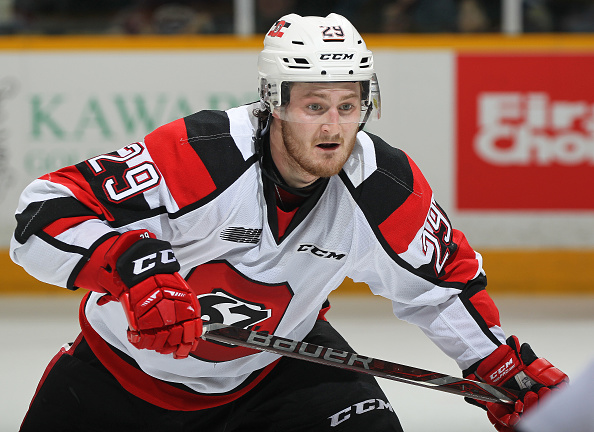 PETERBOROUGH, ON – MARCH 14: Tye Felhaber #29 of the Ottawa 67’s skates against the Peterborough Petes during an OHL game at the Peterborough Memorial Centre on March 14, 2019 in Peterborough, Ontario, Canada. The 67’s defeated the Petes 3-2 in overtime. (Photo by Claus Andersen/Getty Images)