The NHL Department of Player Safety announced that San Jose Sharks center Joe Thornton has been suspended for one game. This is his fourth career suspension.

San Jose’s Joe Thornton has been suspended for one game for an Illegal Check to the Head on Vegas’ Tomas Nosek. https://t.co/05ZmQEc7D6

Thornton has been suspended for one game for an incident with Vegas Golden Knights center Tomas Nosek. Thornton delivered a high hit to the head of Nosek during the second period of Game 3. It appeared to be the shoulder of Thornton that made contact with Nosek’s head. The San Jose centre got a minor penalty for illegal head contact. As a result of the hit, Thornton will miss Tuesday’s Game 4 in Vegas.

This season, Thornton has scored 16 goals and 35 assists for 51 points. He also added 20 minutes in penalties. His possession numbers were 56.9 percent Corsi and a relative Corsi of +3.6 percent. He has a goal and two assists in three Stanley Cup Playoff games this season.

Thorton was drafted first overall by the Boston Bruins in the 1997 NHL Draft and spent his first eight years with them. San Jose acquired Thornton from the Bruins in 2005. Over the course of his career, he has put up 413 goals and 1,065 assists for 1,478 career points in 1,566 career games.

Vegas Golden Knight, Ryan Reaves, commented on Thornton’s hit. “I’ve got a buddy with a grandpa who’s going through the same thing. He can’t see very well because he’s getting old. Needs glasses. If he gets suspended, he is going to have a hard time seeing from the press box.”

The Sharks are currently down a game in their series with the Golden Knights. Losing Thornton doesn’t only put the Sharks down a man but also a veteran who has 127 career playoff points. In an already physical series between the two teams, losing a guy like Thornton will hurt the Sharks in the next game. Through the first three games this series, Thornton has three points.

Lukas Radil will most likely make his playoff debut on Tuesday night. The rookie center scored seven goals and four assists for 11 points in 36 games this season. The Sharks recalled Radil on March 7, the day after the regular season ended. 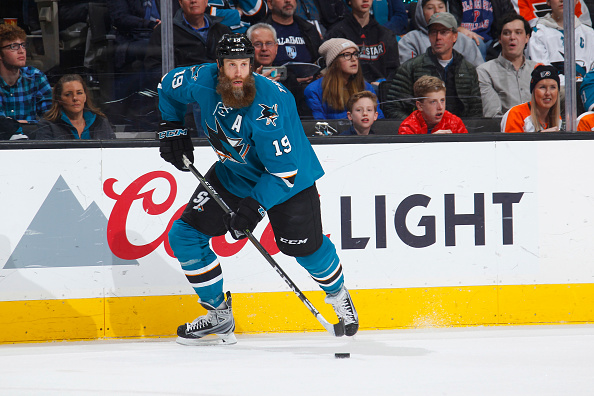