Its time for the 2019 Stanley Cup playoffs, and Tampa Bay Lightning and Columbus Blue Jackets face off for the most coveted prize in the NHL.

What is surprising, however, is the fact that the two teams have never played each other in the playoffs. Tampa has cruised through the Atlantic Division and achieved the President’s Trophy, but look to progress past the Eastern Conference final this year.

Columbus, who had to battle hard for their playoff spot, will attempt to progress further than the first round. It will be their fifth playoffs in franchise history. Although the odds seem one-sided, Columbus may give Tampa some pause.

Here are three storylines to consider going into this series.

The Power Of Three-Offensive Dominance

Tampa has a dominant offense lineup, averaging 3.89 goals per game. Columbus will have to overcome it to succeed. It’s a tough ask, particularly when looking at the power three for Tampa this season. Nikita Kucherov leads the league with an outstanding 128 points (41Goals, 87A), captain Steven Stamkos with 98 points (45G, 53) and Brayden Point with 92 points (41G,51A).

Compare this to the Blue Jackets power three, Artemi Panarin had 87 points (28G,59A) during the regular season. Cam Atkinson added 69 points (41G,28A) and Matt Duchene (stats in total) 70points (31G,39A). In the last five meeting between the two teams, Tampa has won all five games, with Columbus scoring only two goals in those five encounters.

However, Columbus has built up offensive momentum in the last 10 games and matched Tampa with a 7-3-0 record. They have heart and have battled hard to get a playoff spot, it’s just if they can stop the offensive onslaught of Tampa’s top six.

A pivotal factor for Columubs to keep pace will be goaltending. Both teams have solid impregnable goaltenders, who are both proven capable of putting up big numbers.

Tampa’s Andrei Vasilevskiy is likely to be nominated for the 2019 Vezina Trophy with 39 wins, 2.40GAA, .925Sv% and six shutouts this year. The 24-year-old has the added advantage of having such a strong team in front of him.

In comparison, Columbus goaltender Sergei Bobrovsky has 37 wins, 2.58GAA, and .913Sv% with nine shootouts. The NHL All-Star has won the Vezina twice in his career. The 30-year-old Russian native has the edge when it comes to experience. However,, he will be heavily depended on to keep the Jackets in the series.

Like most playoff games, it can depend on special teams. Tampa has the top power play percentage and penalty kill in the league. While Columbus are joint top for PK, they rank low on the PP%. Tampa is most dangerous on the powerplay. As evident in the statistics with Kucherov achieving (15), Stamkos (19) and Point with (20) power play goals. Combine this with their offensive stats, could be troublesome for the Blue Jackets.

Particularly comparing these numbers to Columbus Powerplay goals. Panarin (6), Duchene (6), Atkinson (8), Its obvious Colombus cannot afford to spend time in the box. However, the BlueJackets have a low combined PIM and strong PK. It will make for interesting viewing

Although Columbus has a shot at winning the first game based on momentum, Tampa Bay is likely to dominate. There’s been a lot of talk of sweep, but the Jackets can steal a game. 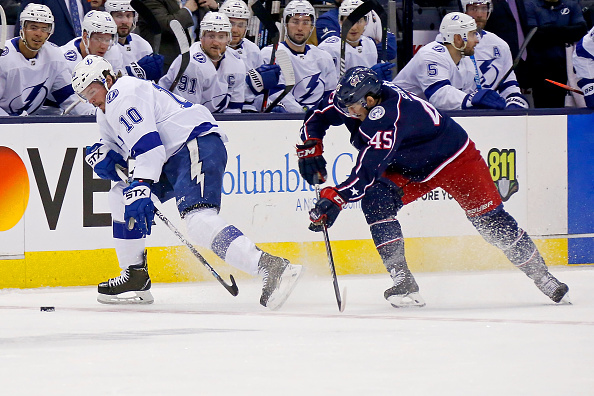 COLUMBUS, OH – FEBRUARY 18: J.T. Miller #10 of the Tampa Bay Lightning and Lukas Sedlak #45 of the Columbus Blue Jackets battle for control of the puck during the game on February 18, 2019 at Nationwide Arena in Columbus, Ohio. (Photo by Kirk Irwin/Getty Images)