The Vancouver Canucks announced that defencemen Quinn Hughes will miss at least one week with what head coach Travis Green is calling a “pretty good bone bruise.”

Quinn Hughes has a "pretty good bone bruise," said Green, discussing the MRI results. Hughes will be in a walking boot for a week, then he'll be reevaluated.

The former Michigan player suffered the injury during the first round of the Big Ten Tournament against Minnesota. He would end up playing through the injury for the rest of the tournament. The young defenceman is expected to be in a walking boot for the next week.

Hughes was drafted by the Canucks seventh overall last season by the Canucks but elected to go back to the University of Michigan for another year. In his two years with the Wolverines, Hughes had 10 goals and 52 assists in 69 games.

Antoine Roussel Done for The Year

The Canucks also announced that Antoine Roussel is done for the year was injured with 10:18 left to go in the Canucks 4-1 win over the New York Rangers. He was run into by Brendan Lemieux on a play that would lead to the Cauncks third goal of the game. Roussel would stay down on the ice and would need assistance getting off the ice.

This season, Roussel scored 9 goals and 22 assists for 31 points to go along with 118 minutes in penalties. His possession numbers were 49.5 percent Corsi and a relative Corsi of +0.8 percent.

What This Means for Vancouver

With Vancouver out of the playoff race, the loss to Hughes is going to cost his some valuable NHL experience. Vancouver was hoping to have Hughes in the NHL for the rest of the season to get some playing time. There is still a slight chance that Hughes could see action in Vancouver during the final two weeks of the regular season. It also wouldn’t be a surprise if the Canucks play it safe and keep him out till next season.

Roussel who was playing on the top line for the Canucks was having himself a career year offensively. He has proven to be a valuable piece for the Canucks since being signed in the off-season. With Roussel out of the line-up, expect Loui Eriksson to find his way back in. He was a healthy scratch last night for this first time under coach Green. The 33-year-old winger has only two points in his past 18 games which led to the decision to scratch him. 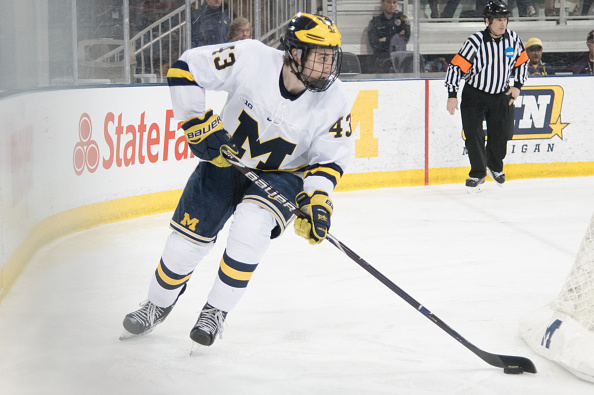 ANN ARBOR, MI – MARCH 03: Michigan Wolverines defenseman Quinn Hughes (43) skates behind the net with the puck during the Michigan Wolverines 6-5 win over the Wisconsin Badgers in the BIG10 Hockey Tournament on March 3, 2018, at Red Berenson Rink at Yost Ice Arena in Ann Arbor, Michigan. (Photo by Steven King/Icon Sportswire via Getty Images)